Clyde 1 listeners rallied round to make sure Elizabeth Bridgewater, 71, could see her daughter getting married. 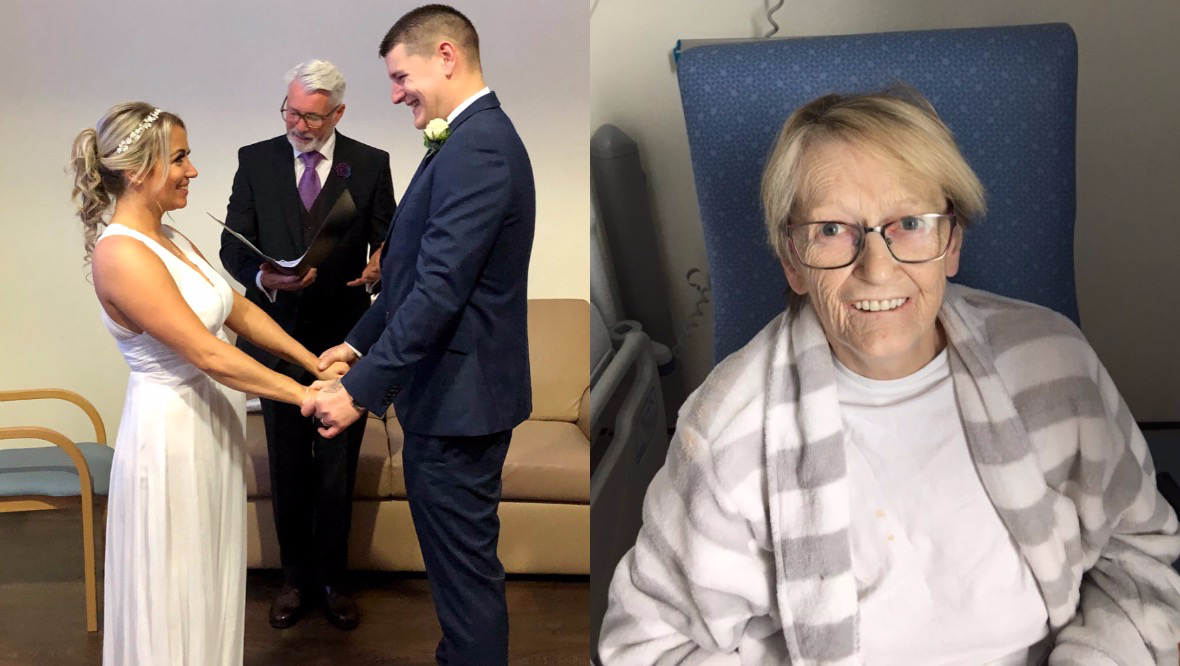 A mum with terminal cancer had her dying wish come true after radio listeners rallied together to make sure she could attend her daughter’s wedding.

The pensioner never thought she’d get to see her youngest daughter Nicole and fiance James tie the knot. However thanks to donations from listeners of Clyde 1, the couple of seven years were able to stage a surprise wedding at the hospital on Saturday with Ms Bridgewater as the guest of honour.

After being asked to walk Nicole down the aisle, Ms Bridgewater has “been on cloud nine ever since”.

The big day came together after Nicole’s sister, Lisa, made an emotional plea to DJ George Bowie for help to make the wedding as special as possible.

She said: “We were told my mum was unlikely to make it through the next few weeks and she had mentioned that she would love to see James and Nicole get married after a four-year engagement.

“My sister and James were just happy getting married and making my mum’s wish come true, but I was determined to give them the day they deserve.”

Nicole and James, both 30, had been caring for Ms Bridgewater since her diagnosis in 2018, before she was eventually taken into hospital.

Lisa, who suffers with ill-health herself, added: “Part of the reason their engagement was so long is because the couple were so busy looking after my mum, me and anyone else who needed it.

“Nicole and James are the most caring and selfless people and would do anything for anyone, especially my mum.

“So as soon as Nicole and I had the idea to surprise mum with a last-minute wedding in the hospital sanctuary, I knew I had to do everything in my power to make sure their day was special.”

Thanks to the Clyde 1 listeners, donations started pouring in – from balloons, decorations, the cake and flowers to hair and make-up, photos, champagne and chauffeur-driven transportation.

Lisa said she was “completely blown away by the response”.

She added: “The wedding was beautiful. Nicole surprised my mum in her hospital room in her full wedding dress, asking her to walk her down the aisle.

“At first my mum thought we were kidding on, but when she realised what was happening, she was over the moon and has been on cloud nine ever since.

“Mum has been a lot spritelier since the wedding which we are hoping means we have her around for a bit longer than previously expected.

“She even stood up for a picture with the whole family despite not having been able to stand for the past six weeks.”

The happy couple are also still coming to terms with their big day.

Nicole said: “I would have got married in jeans and been happy curling my own hair if it wasn’t for the kindness of strangers who made my wedding day so remarkable.

“My hair and make-up were done and pulling up in a limousine made me feel like a real princess. I can’t thank everyone enough.”

DJ George Bowie, presenter of Bowie@Breakfast which airs from 6-10am on weekdays, said the radio station’s phone lines lit up and “didn’t stop ringing” after the appeal.

He added: “I’m so honoured that we were a part of this occasion and could help make it the day the whole family deserved.

“There was never any doubt that our listeners across Glasgow and the west would come through for Lisa and her family, but we could never have imagined the overwhelming response.

“Thanks to everyone who played a part in this spectacular show of generosity.”