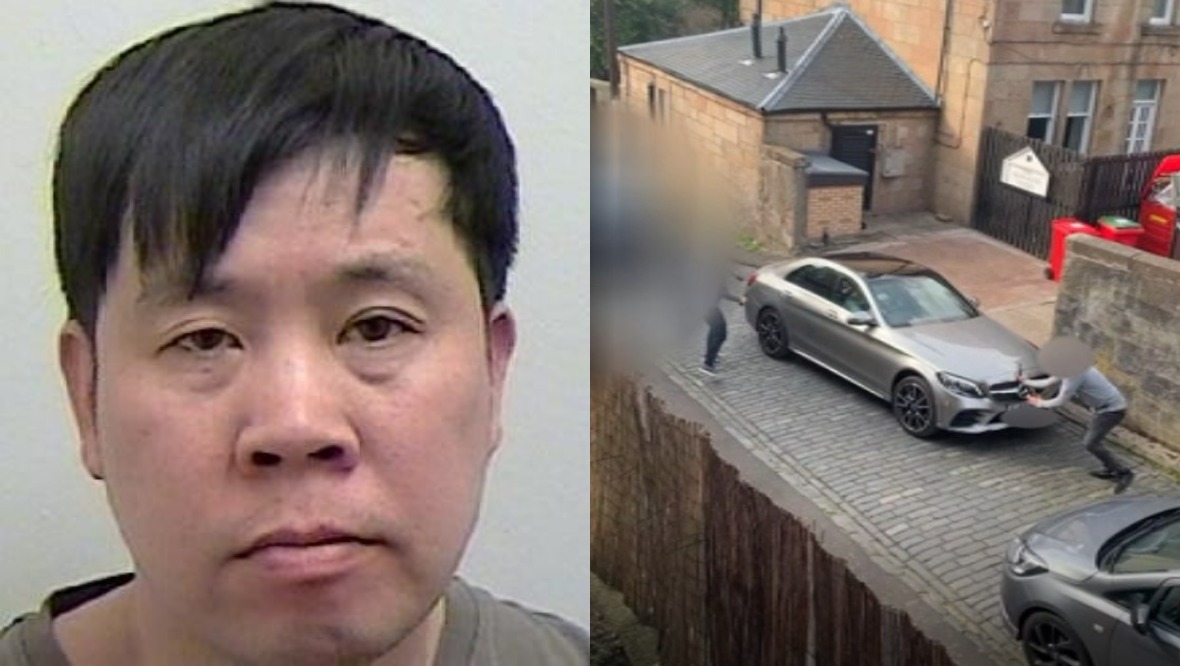 A drug dealer who mowed down a police officer in a murder bid has been jailed for 13 years.

Mobile phone footage caught Yu driving at PC Kerr as he and colleagues swooped on a cannabis deal.

PC Kerr told a jury that he “thought he was going to die” as he was “propelled into the air.”

Yu locked up at the High Court in Paisley having earlier been convicted of attempted murder as well as being concerned in the supply of cannabis.

Judge Fiona Tait sentenced him to ten years for trying to kill the constable with three years added for the drug offence.

Co-accused Wang Wen, 30, pled guilty mid trial to being concerned in the supply of cannabis and was sentenced to 50 months.

The court heard plain clothed officers in three unmarked police cars were in the area based on intelligence that a “drugs transaction” was taking place.

PC Walls left PC Kerr to get a better vantage point from the nearby hotel.

He exited the police car while two colleagues approached Yu’s driver’s side stating that they were officers and ordered him to get out the vehicle.

PC Kerr stopped in front of Yu’s Mercedes when it suddenly “came towards” him.

Recalling the horror, PC Kerr said: “I managed to get a slight jump on the car and put both hands on it.

“I hit my head and shoulder off the windscreen of the car.

“I travelled with the car and was on the bonnet for a few seconds.

“I was aware my car was on the other side, I thought I was going to be crushed.

“My head and left shoulder smashed against the ground.

“I thought I was going to die.”

PC Kerr stated the car came to a stop but could hear the engine revving.

Colleagues then struggled with Yu before arresting him and Weng, who was in the back seat.

He had a bleeding head wound as well as hurting his ankle and shin.

PC Kerr was off work for two-and-a-half months as a result of his ordeal.

Yu had lodged a special defence of self-defence claiming he believed he was under the attack of armed men.

Yu was also convicted after the trial of resisting and obstructing other officers in the lane.

He was sentenced to 12 month for that crime to run concurrently to the 13 years.