‘Difficult’ night for police as 28 arrested at Rangers party

Thousands of supporters gathered at George Square in Glasgow on Sunday. 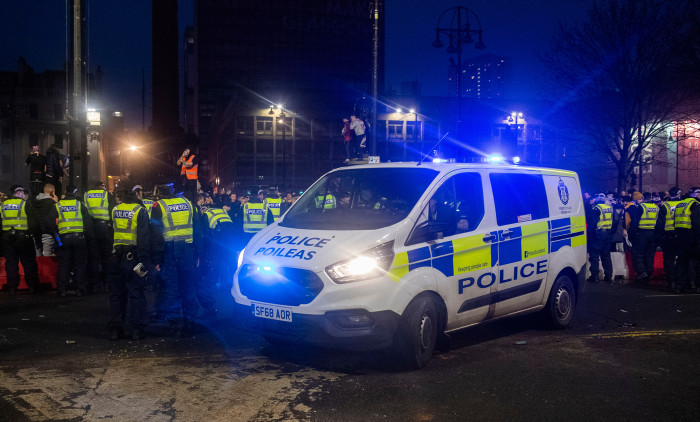 Police arrested 28 people as Rangers fans gathered in their thousands to celebrate the club winning the Premiership.

Glasgow’s police chief said officers were faced with “a very difficult set of circumstances” as they tried to control the crowds on Sunday.

Football fans flocked to George Square in breach of coronavirus restrictions and could be seen singing, drinking and letting off fireworks.

The scenes were condemned by First Minister Nicola Sturgeon, who said the fans were putting the planned loosening of lockdown restrictions at risk.

Police officers were assaulted while members of the public were arrested for using pyrotechnics and sectarian-related breaches of the peace.

A number of people were injured throughout the day, some as the result of drunkenness. Seven fixed penalty notices were handed out.

Memorial benches in George Square were destroyed and litter was strewn across the area.

A clean-up crew were on the scene on Monday morning, with smashed glass and discarded alcohol containers gathered up.

In a statement, the club said it had “proactively engaged” with Police Scotland and the government regarding public safety on the lead-up to Sunday.

“Despite the coronavirus regulations and the prohibition of gatherings, our officers were faced with a very difficult set of circumstances as many thousands of supporters gathered to celebrate across a number of different venues.”

He added: “An appropriate policing response was in place throughout the day and officers continually engaged and encouraged compliance with coronavirus regulations.

“Over the course of the day a number of minor injuries were sustained by members of the public, some of which were as a result of intoxication.”

Sturgeon congratulated Rangers on the win, but warned that supporters gathering in crowds could “delay exit from lockdown for everyone else”.

She tweeted: “I share folks’ anger at this. Everyone has made so many sacrifices in the past year and seeing a minority risk our progress is infuriating and disgraceful.

“It is deeply unfair to the entire country, and the police have a hard enough job already.”

In a statement the club said: “During the last number of weeks, Rangers can confirm that we initiated open dialogue with key stakeholders in relation to the possibility of us achieving a historic 55th league title.

“We have proactively engaged with our local MP, the Justice Minister, the Scottish Government, Police Scotland and the SPFL in relation to maintaining a cohesive message regarding public safety during the Covid-19 pandemic.

“We understand the jubilance of our support across the world who recognise this has been a historic year for the club.

“Nevertheless, it has been of great frustration for all football fans across the world that they have not been able to watch their team within stadiums, especially for the loyal Rangers season-ticket holders who have stood by this football club through thick and thin in the last decade.

“We reiterate the message from our manager, Steven Gerrard, who highlighted that fans should adhere to government guidelines – stay safe, socially distance and look after each other in this difficult time.