Derek Wellington told his former partner: 'I am going to park my lorry in your living room.' 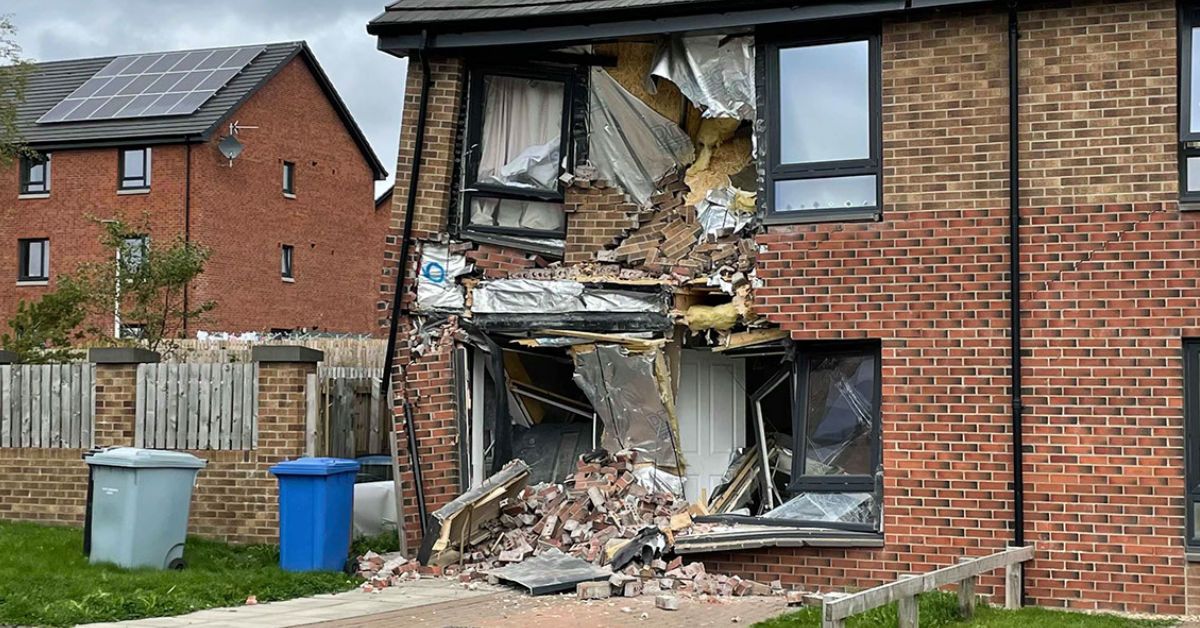 A man destroyed his ex-girlfriend’s home by deliberately smashing a lorry into the front of it after she refused to meet him in South Lanarkshire.

Derek Wellington flew into a drunken rage on September 6 when his former partner refused to meet up with him less than a month after he left her in hospital following a hotel attack.

The 34-year-old screamed down the phone to her: “I am going to park my lorry in your living room.”

The 33-year-old woman was later out on the street near her home in East Kilbride when she spotted Wellington driving past.

One witness described sounds akin to an “earthquake” as he repeatedly reversed his HGV into her house completely wrecking the property.

A judge heard how a friend and two children inside luckily escaped unhurt.

The destruction left a £475,000 repair bill with both Wellington’s ex and a neighbour losing their homes.

Wellington is now behind bars after he pled guilty to a string of charges including culpable and reckless conduct to the danger of lives.

He will be sentenced next month.

Prosecutor Lisa Gillespie QC told the High Court in Glasgow how Wellington had been on bail at the time not to go near his former partner.

This was after he left her needing hospital treatment following an attack at a hotel in the west end of Edinburgh on August 8 last year.

Wellington headbutted her – who he began dating earlier that year – as well as dragging her and pinning her against a wall.

But, despite the court order, the couple resumed contact and he repeatedly called her on the day of the lorry rage.

Miss Gillespie said Wellington begged to meet his ex, but she refused.

The prosecutor added the thug then took “umbrage” at this, shouting, swearing and calling his partner obscene names.

Miss Gillespie went on: “During these calls, he stated he was going to come round and smash or ram his lorry into her home.

“He said he was ‘going to park his lorry’ in her living room.

“She told him under no circumstances was he to come to the house because there were children there.

“He stated he was coming round any way.”

His ex tried to calm Wellington by agreeing to meet him on the street nearby.

As she was then outside, she panicked when she spotted Wellington in his truck around 11pm.

Miss Gillespie: “She was terrified because of his earlier threats and ran back to her house.

“As she did, she heard a loud banging noise and windows smashing.

“Wellington then drove past her again away from the street.”

She then broke down and became hysterical when she found her housing association home “caved in”.

A friend who had been inside at the time had spotted Wellington pull up, straighten his lorry and then reverse “at speed” into the property.

The trucker, of Kilmarnock, Ayrshire, repeated what he did before escaping.

The friend raced to grab the two children there and get outside.

The court heard all were amazingly unharmed.

A neighbour meantime had been in bed and was awoken by a loud crashing.

Miss Gillespie said he felt his home shake and “likened it to an earthquake”.

Police soon arrived to the carnage with a number of residents out on the street.

Wellington’s former partner happened to be on the phone to him when one officer spoke to her.

Wellington was overheard threatening that he was “coming back to finish it”.

He added: “I told you I was going to ram it into your house.”

The damaged truck – still carrying a load of woodchips – was found abandoned in a supermarket car park the next morning with Wellington’s wallet inside.

He was later arrested, but went on to make no comment.

The court heard occupants of seven houses had to be evacuated that night.

Those in four of the properties were later able to return, but the damage to the ex-girlfriend’s and a next door neighbour was so bad, the homes had to be demolished.

The other house needed repair work before it was safe.

Clyde Valley Housing Association ended up with a bill totalling £475,000 due to damage and loss of rental income.

Lord Armstrong remanded him in custody pending sentencing on July 27 in Stirling.