Douglas Birch flew into Glasgow Airport on Wednesday with his new wife, Olivia. 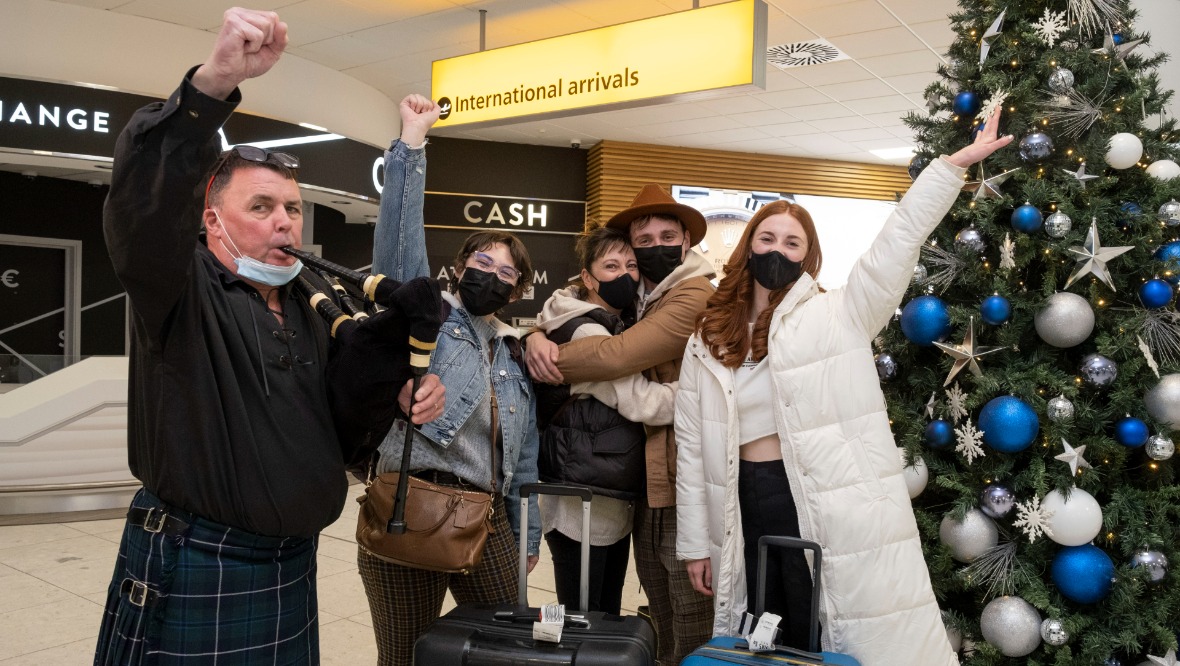 A man who hadn’t seen his family in Scotland for more than two-and-a-half years received a festive surprise on his return home for Christmas.

Douglas Birch flew into Glasgow Airport on Wednesday and was piped in on his arrival by dad Lachie.

Douglas, who travelled from Chicago via Amsterdam, was joined by his new wife, Olivia.

Alongside his bagpipe-playing dad, mum Fiona and sister Vivienne were also there to greet him.

He told STV News: “It feels so great to finally be back.”

The assistant camera operator, who has lived in Chicago for six years, added that the warm welcome made him feel “more proud to be Scottish”.

The 25-year-old had no idea that his dad had learned to play the bagpipes, so said the surprise was “phenomenal”.

He added: “It’s made me really happy to be home.”

Due to the transatlantic travel restrictions brought about because of Covid, the family, from Bearsden, East Dunbartonshire, haven’t been together in person since April 2019.

They were due to reunite at Douglas and Olivia’s wedding in Chicago last year but were unable to as the pandemic raged on.

Now home, Douglas said: “We’ve been waiting for so long. So much has happened in our lives and I’ve wanted to be home with my family for so long.

“It just feels so good. Words can barely describe how good it feels to be back and spend Christmas with my family again.”

Dad Lachie, 61, plays the drums, but had never been a piper.

Ahead of the wedding celebration, he was challenged by his sister-in-law to learn how to play the bagpipes as a surprise.

Although the trip was called off, Lachie continued to practice.

He said: “Even though our plans to head over to America didn’t happen, I decided to stick with the pipes anyway as I’d started to learn, although, I didn’t realise how hard it was going to be.

“It was great to not only see Douglas and his new bride again after so long, but it was also brilliant to see the look on his face – he had no idea.”