Christina Mackenzie was rushed to hospital with a fractured pelvis after being knocked off her bike on the A811 in Stirlingshire. 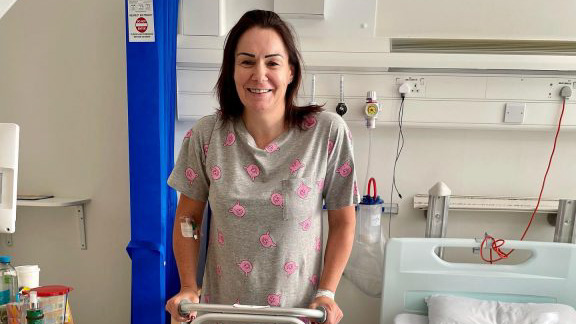 A record-breaking cyclist, who has been seriously injured in a hit and run, says she is “disgusted” by the actions of the driver who “left her for dead”.

Christina Mackenzie was knocked off her bike on Tuesday September 27 on the A811 at the Kippen roundabout in Stirlingshire.

She fractured her pelvis in two places and it could be as long as a year before she fully recovers.

It took Christina a number of days to comprehend what had happened to her, as well as the fact that the driver of the vehicle drove off without stopping.

She told STV News: “The decision that they made to just leave me, I’m disgusted by it, thinking: ‘How you could do that to someone else?’

“These people in the cars, they’ve got the same relatives as well, so what would they think if something happened to them,” she added.

Ms Mackenzie was on a training ride when she was hit twice, first by a black vehicle and then by the silver trailer it was towing.

“The force of it just completely wiped me out,” she said.

“I skidded round, I hit my head a couple of times off the ground and then ended up back facing the way that I was coming, so I did a 180,” she explained.

The driver of the car behind came to her rescue and tried to move Ms Mackenzie’s bike from between her legs. It was at this point she started feeling “excruciating pain” from her hip area.

Christina was admitted to Forth Valley Royal Hospital in Larbert where she says she was tearful for the majority of her ten-day stay because of the way she was being treated.

She felt staff wanted to get her home as quickly as possible.

The 45-year-old claimed she had to justify why she needed to stay in hospital, despite explaining that she lived alone and was fearful of not being able to look after herself.

“I didn’t want to be there, I wanted to be home, but I didn’t feel safe to be and it was just that awful, awful experience of having to justify why you need to be there,” she explained.

Ms Mackenzie finally left the hospital on Friday, October 7 and said she was left to climb 10 steps to her flat without any help.

“I was just in tears with the pain just trying to get up there.

“I literally had to basically just suffer the pain to get every single step – the further the steps were going up, the pain just became more and more excruciating.”

That evening she went 11 hours without the strong pain medication she needed and said she resorted to taking paracetamol because the hospital had failed to deliver it.

She was also forced to call NHS 24, who eventually arranged for painkillers to be brought to her home.

A statement from Forth Valley NHS said: “We are sorry to hear that this patient was unhappy with aspects of her care during and after her stay in hospital and we have arranged for a member of our patient relations team to contact her direct so that we can look into the issues she has raised.”

Police have been carrying out enquiries in the area and obtained CCTV images of a vehicle they believe to be involved.

It is described as a black Ford Ranger with tinted windows towing a single-storey trailer.

Road policing sergeant Jack Swindells said: “We must stress that the driver may not be aware that they are involved in the incident.

“[Due to] the type of road that this incident occurred on and the type of vehicle involved, towing a trailer, it may be the case that they had not been aware they had this collision. They may have continued their journey and be none the wiser.

“What I would say is if you do recognise this vehicle or you potentially have any information, I’d ask you to contact on 101 quoting incident 2444 for September 27.”