Barbara Welsh is worried about her future in the city as rental prices continue to soar. 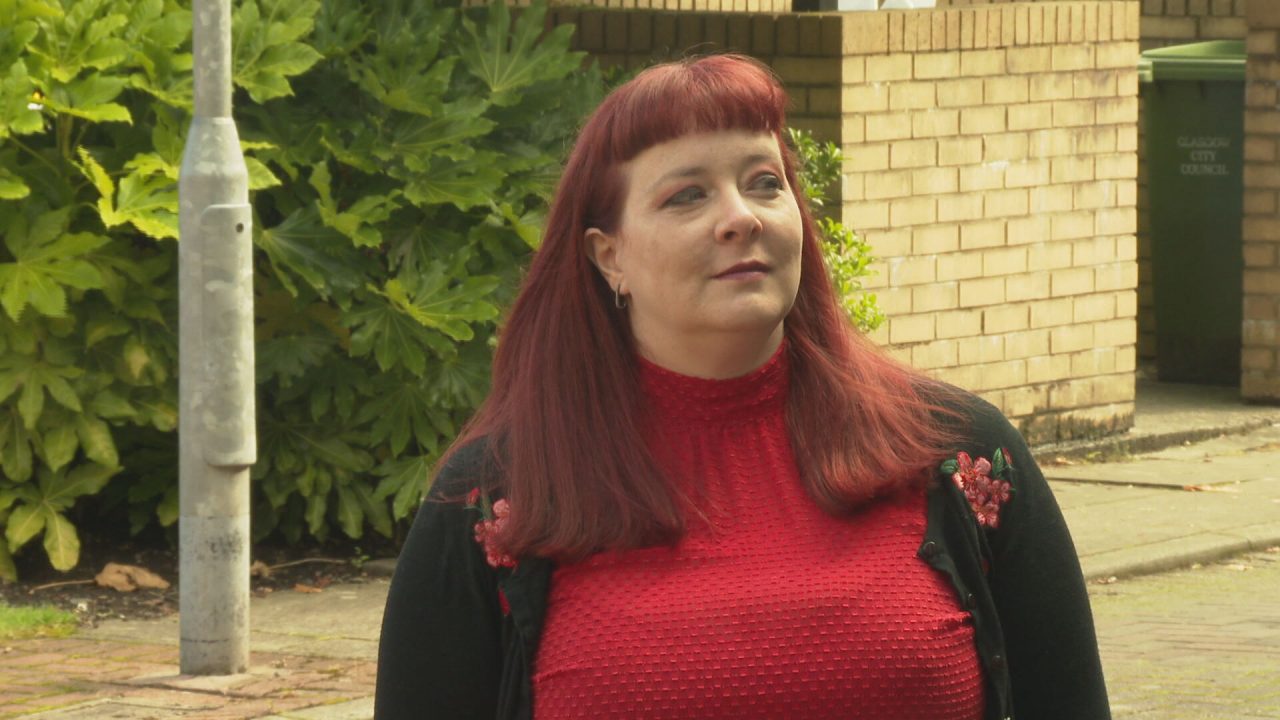 Barbara Welsh fears she may have to leave Glasgow after her landlord hiked her monthly rent by £200.

She is not alone in feeling the financial strains of living in Scotland’s private rental sector. Rents across the country rose 9.9% year-on-year in the second quarter of 2022 to an average of £970, according to property analysts Citylets.

In its quarter report, Citylets say it is likely the average property to rent in Scotland will soon exceed £1,000 for the first time.

“It is making me very anxious, the rent increase is huge,” Barbara told STV News. “I am potentially going to have to move out of Glasgow to a lower-priced property.

“But I’m not the only one in this area that has had a similar rent hike. It’s just a very difficult situation.”

Barbara says her landlord cited rising costs as the reason behind his decision to increase her rent.

“It’s just not a very good excuse,” she said. “It’s difficult because I have accepted it and agreed to it, but it’s pretty much half of my take-home pay, which is significant, and it is putting a lot more pressure, especially with other rising costs like fuel.”

Scotland’s tenants’ union, Living Rent, which represents people living in Scotland’s private and social rented sector, believes there is a need for emergency measures to protect tenants from evictions and further rent hikes.

Landlords can legally increase rent once a year as long as they give three months’ notice, but there is no cap on the new amount they can charge.

Elle Glenny, a member of Living Rent, based in Glasgow, told STV News that landlords shouldn’t be passing on increased costs to their tenants.

She said: “There needs to be security for renters across all sectors – that feeling (of looking) over your shoulder, that there’s a chance your rent might increase any day, that has to be stopped.

“It’s unacceptable for people to feel that level of insecurity – particularly alongside a cost-of-living crisis, which nationwide is already really ruining people’s ability to live securely, safely and calmly.

“Landlordism – going into property management – is a business like any other and all business involves risk. You cannot in any way expect that your tenants can foot the costs in a crisis.

“It’s not OK to pass on those costs to tenants, particularly as things stand when there is such a wealth and power imbalance between tenants and those who own property.”

According to the Office for National Statistics (ONS), people living in rented housing whose cost of living had gone up were more likely to have reduced their spending on food and essentials (46%) than those who own their homes outright (27%) or are paying off a mortgage (33%).

Those in shared ownership schemes (paying a mortgage on part of the home and rent on the other) also appeared more likely to be cutting back on essentials, at 42%.

The ONS said this may be because those in rented housing were more likely to be seeing costs increase in other areas.

While renters were no more likely than mortgage payers to report an increase in their cost of living, they were twice as likely to report their housing costs as a reason for this (33% of renters, compared with 16% of mortgage payers).

As well as rising prices, people are also facing intense competition to find a flat in the private and social housing sectors.

More than 1,000 people recently applied to view a one-bed flat in Glasgow city centre, according to property agent Tay Letting.

David Gibb, the firm’s operations director, said: “We are seeing unprecedented demand for property, I have never known anything like it in my 20 years in business.

“That is due to a number of factors creating a perfect storm – a red-hot sales market, changing government legislation and the recent mix-up over student accommodation at Glasgow University.”

Mr Gibb also says more and more people are deciding to commute into cities from further afield, as well as considering other options such as flat shares.

Dundee has seen the biggest year-on-year increase in rental prices, with the average monthly rent there now higher than in Aberdeen.

“I used to be able to go out a lot, but I’m having to cut back on so many things,” said Barbara, who works nearby at the University of Glasgow.

“I have anxiety anyway and it is making me more anxious. I do worry about whether I’m going to be able to put the heating on, I worry about energy costs.

“People are losing their homes and my concern is there will be people who become homeless due to this and that’s not right.”

Barbara believes a rent freeze would be helpful in her situation.

“It’s very difficult for the Scottish Government to put taxes on oil and energy companies, so this would be a really meaningful and tangible ease for the cost-of-living crisis that’s occurring at the moment,” she added.

An emergency rent freeze is something that Scottish Labour leader Anas Sarwar is calling for as part of an Emergency Cost of Living Act when the Scottish Parliament returns from its summer recess.

“We’re in the midst of a cost-of-living crisis that should be seen as a national emergency on a similar scale to the Covid outbreak and, therefore, that requires urgent action from both the UK and Scottish governments,” Sarwar told STV News.

He said: “Right across the country, there are people feeling the squeeze and part of that squeeze is pressure they face on their rent, so we should be looking at an emergency rent freeze across the country, to help people with their bills and help get them through this crisis.

“I think there is a difference in increases between people’s mortgages going up due to increases in interest rates and the exponential increases we’re seeing in some rents across the country.

“I don’t think that is fair, so in the longer term we, of course, need more capping of rents, we need proper regulation of rents, but in the here and now, in this emergency situation, it is sensible to have a rent freeze across the country.”

Labour MSP Mercedes Villalba brought an amendment for a rent freeze to the Coronavirus Recovery and Reform Bill that was passed in the Scottish Parliament earlier this year.

But she was opposed by the SNP, Greens, Lib Dems and Conservatives in a 94-21 defeat in late June.

Sarwar said: “It’s unimaginable that they voted that down in the first place – that was meant to be a Green policy, that they ditched when they went into coalition with the SNP.

What is the Scottish Government’s view?

The Scottish Government is carrying out a consultation on plans to deliver a new deal for tenants, which would give them stronger rights, greater protections against eviction and access to greener, higher-quality, more affordable housing.

Results of the consultation will feed into the final version of a strategy to be published next year, with elements of the proposals put to the Scottish Parliament in a Housing Bill in 2023.

“We’ve already done that just in the last few months through the Coronavirus Recovery Bill – strengthening the protection against evictions – but we’re committed to longer-term reform. We’re the first government in decades committed to reintroducing a serious national system of rent controls.

“It’s unacceptable that people see rents in the private sector as simply unaffordable and the legislation we will be introducing to parliament will make sure that we rebalance those rights, so that housing is a human right for everyone.

“We have already introduced short-term measures like increased protection against evictions and, of course, the tenant grant fund, which has been available through local authorities across Scotland. We’re constantly looking at what more we can do and we’re committed to introducing a national effective system of rent controls as well.

Regarding Labour’s defeated amendment, Harvie said the party’s proposals would have resulted in an “unworkable system”.

John Blackwood, chief executive of the Scottish Association of Landlords, says the main problem is there is not enough rented accommodation available in Scotland.

He told STV News that tenants are struggling to find their next home and the situation is not expected to improve any time soon.

“A consequence of that is simple supply and demand. If you don’t have enough housing, then prices go up, and in this case rents go up.

“If we had more supply we wouldn’t have the increases in rents that we are seeing just now, so let’s deal with the problem, which is providing more housing for people that really need it and that in itself will sort out the rent hikes,” said Blackwood.

He also said the Scottish Association of Landlords is equally concerned about large hikes in rents and is calling on the Scottish Government to urge landlords to stay in the sector, rather than selling up.

“There’s lots of fear there with private landlords and with any investor if you frighten them, you’re going to frighten them off. And that’s what we’re seeing in Scotland, Blackwood told STV News.

“Scotland is no longer an attractive place for landlords to invest – they are now investing in England or they are just selling up completely and we have been calling on the Scottish Government to address that – you can see it, landlords are telling us every single day that they are selling up.”