Groups staged a sit-down protest outside the offices of the SSE in Waterloo Street. 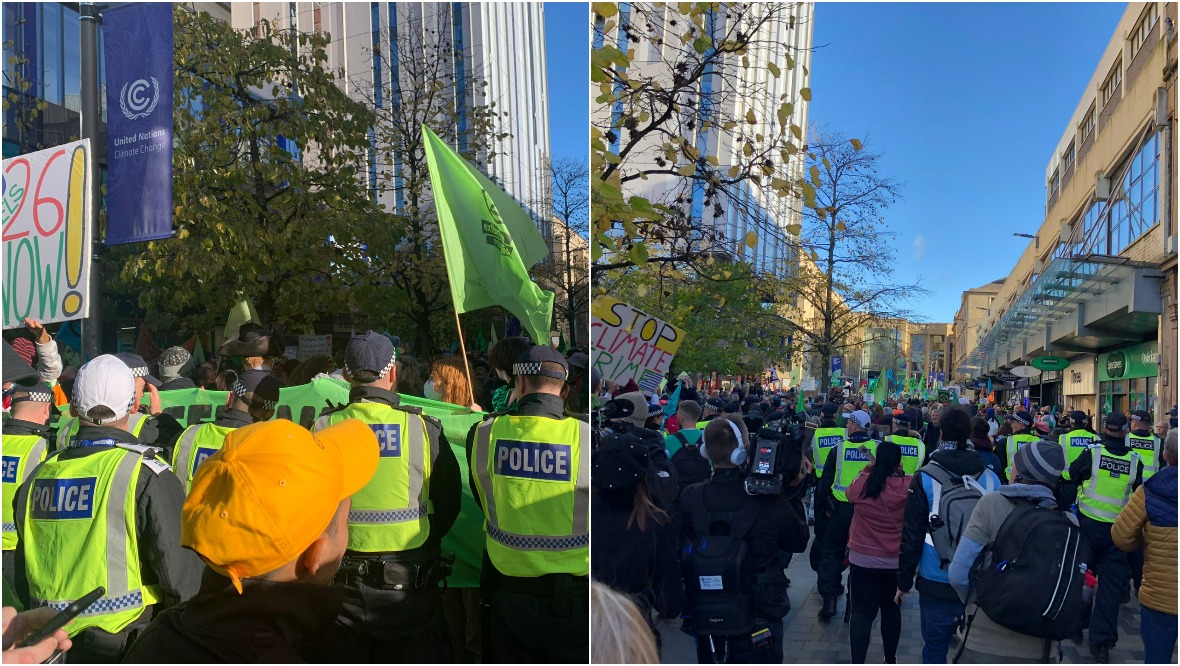 Hundreds of climate activists are marching through Glasgow as part of an Extinction Rebellion demonstration around the COP26 summit.

It is one of several protests in Glasgow on Wednesday, as the COP26 summit discusses the financial system.

Police Scotland said on Wednesday afternoon two people at a protest were arrested after a number of officers were sprayed with paint. Cans of spray paint were also seized.

Assistant chief constable Gary Ritchie said: “Assaults on officers, who put their safety at risk every day to keep the public safe and have adopted a facilitative and rights-based approach to protest, is totally unacceptable.”

Setting off from Buchanan Street steps just after midday, the Extinction Rebellion marchers were held at a police cordon on Sauchiehall Street.

The column of protesters turned back on themselves and went along West Nile Street, before moving down through other parts of the city centre.

Traffic was stopped in several streets as demonstrators made their way through.

Now, several activists have staged a sit-down protest outside the offices of the SSE in Waterloo Street.

The march moved on past as campaigners, surrounded by police officers, refused to move from the entrance to the energy firm.

Scuffles broke out after two men attempted to unfurl a banner reading “control the borders, not our boilers” and Extinction Rebellion protesters tried to stop them.

Later, activists sat down in the middle of St Vincent Street.

Robb Callender, a protester from London, said police were being “quite aggressive” towards those on the march.

He said SSE were “talking a big talk but doing nothing” on the climate.

Earlier, activists campaigning against the Cambo oil field staged a mock ceremony featuring “the Queen” turning off the taps to the oil pipeline.

The demonstration in the city’s Buchanan Street comes on the anniversary of the Queen inaugurating the flow of North Sea oil in 1975.

Friends of the Earth Scotland, along with the campaign groups Platform and Stop Cambo, staged the event on Wednesday morning.

An activist dressed as the Queen descended the steps at the top of Buchanan Street before reading a speech and turning off a large prop tap.

Caroline Rance, of Friends of the Earth Scotland, said: “It has been 46 years since the Queen turned on the tap: it is high time we turned it off and stopped the continual flow of oil and gas.

“If we want a liveable climate, scientists are telling us there can be no fossil fuel developments – oil and gas, as well as coal – from now on.

“Boris Johnson, as host of these climate talks, must demonstrate what real climate action looks like.”

Scottish First Minister Nicola Sturgeon has said an environmental review of the Cambo field in the North Sea should be carried out before extraction begins.

Scottish Secretary Alister Jack has backed the new oil field, saying Cambo is “priced in” to the UK Government’s plans to reduce emissions.

Rosemary Harris, of Platform, said there should be no new investment in oil and gas.

She told the PA news agency: “Any new oil and gas production is continuing to support a declining industry.

“There’s a lot of talk about it being important for jobs, but they should be creating pathways for workers outside oil and gas.”