The Tannahill Centre in Paisley set up a community market to help all those struggling throughout the pandemic. 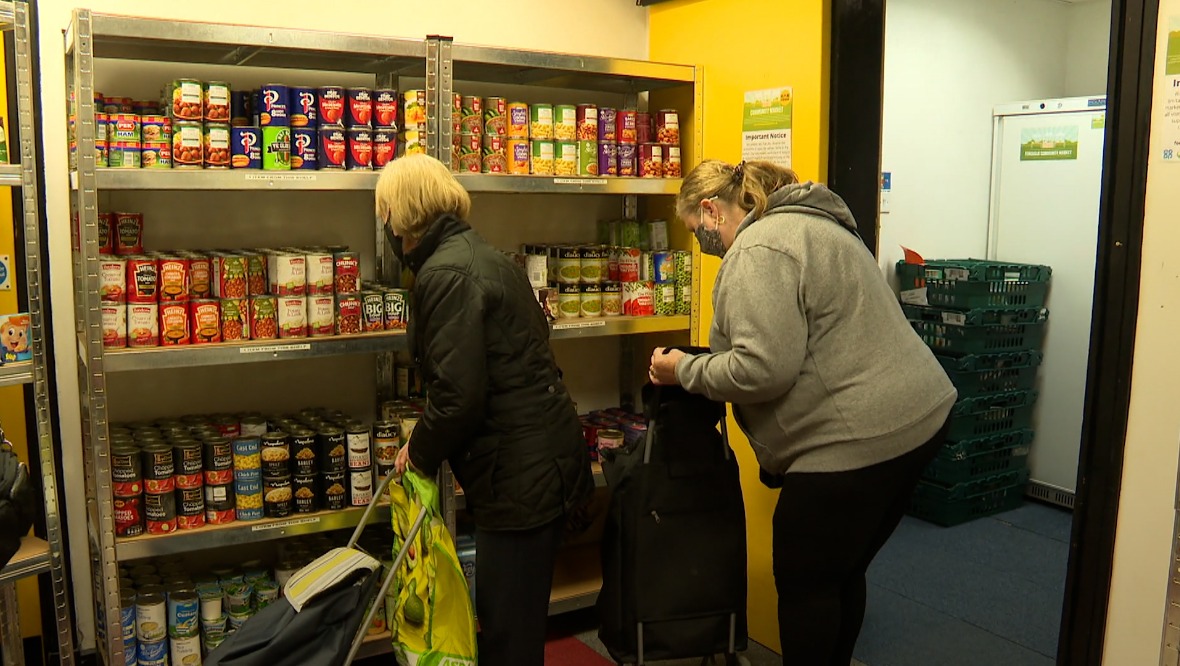 A community market offering affordable food has been described as a “godsend” amid fears household bills are set to soar following the energy price cap rise.

From Friday, gas and electricity bills are expected to increase by 54%.

To help with the cost of living crisis during lockdown, The Tannahill Centre in Paisley, Renfrewshire, set up a community market to help all those struggling throughout the pandemic.

For just £2.50, customers can buy £15 worth of food and household essentials.

Up to 70 people a week already use the market, but organisers expect demand will surge further in the coming weeks.

Sandra, who uses the market, told STV News: “Things are very, very tight and it’s going to be worse with the electricity, gas and everything.

“Coming here saves you an awful lot of money. It really is a godsend and I hope it keeps on going because I don’t know what I’d do without this place and things are really going to get worse.”

One pensioner stated that supermarket prices are “really jumping”, while another local said she was forced to budget due to her hefty rent bill.

Josie – who said she uses a blanket to keep warm to avoid high heating costs – said the market was a “blessing”.

She added: “In the shops, some of the stuff is up 20p and that makes a big difference to me now that electricity is going up.”

Diane, who said she never went out before the market started up, said: “Prices are terrible. I’m really feeling the pinch paying for my gas and electricity.

“It’s really hard to budget and get by. If it wasn’t for the market and getting a dinner here, I don’t know what I’d do to be honest.”

Terry McTernan, Darkwood Crew and Tannahill community development officer, highlighted that the energy rises have only just come into force but have already created “a lot of subconscious fear for the future”.

He said: “What’s great about what we have in Ferguslie just now is we have got the food insecurity element down to a fine art, but energy is not something… we can’t go around ScottishPower, E.ON, Bulb and collect their surplus energy then distribute that later on.

“Continued investment into communities is the best way forward.

“Communities are often best placed to identify solutions that fit them.”

Those working in the energy sector fear that April’s price rise is just the tip of the iceberg.

Jim Percival, a community-based energy advisor with The Wise Group, believes the middle class could even find themselves in fuel poverty.

He said: “Energy is no longer an essential household item.

“Having heating, hot water [and lighting is] potentially becoming a luxury for some households.

“In the longer-term, I expect energy debt to increase but we need to find a way to help households manage this increase.

“Households may be managing at the moment but a 54% increase, no one can truly manage that.

“If you’re on a limited income or benefit, that’ll have a massive impact but there will be households out there – those considered middle class – who are going to be impacted by energy price increases, when they’ve never had that happen to them in the past.”