Access to the Shell station on Eglinton Toll was blocked off for seven minutes by activist group Extinction Rebellion. 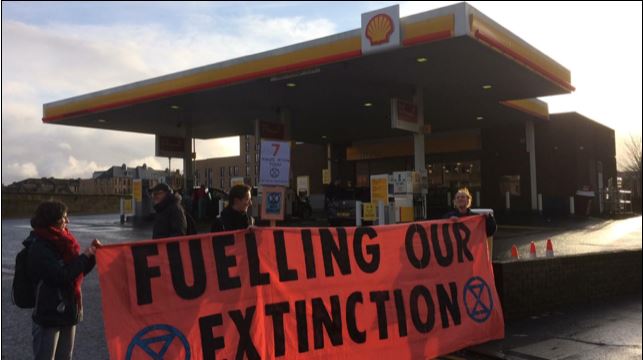 Fuelling our extinction: Protesters in Glasgow.

Climate activist group Extinction Rebellion have targeted a petrol station in Glasgow for their latest protest.

Access to the Shell station on Eglinton Toll was blocked off for seven minutes by the group who were holding banners which read ‘Fuelling Our Extinction’.

The protesters also conversed with drivers who were trying to use the petrol station during that time.

The action is part of a two-week-long Extinction Rebellion campaign against the fossil fuel industry.

Protests have also occurred in Edinburgh, when two individuals interrupted FMQs to demand real leadership from the Scottish Government

Jack Healy, an Extinction Rebellion volunteer at the Glasgow protest today, said “We’re taking this action today because Shell and the rest of the fossil fuel industry are at the root of the climate crisis.

“They’ve been wilfully concealing the truth about the climate crisis for thirty years. I can’t understand how, even now, while Australia is burning, they keep on extracting more and more climate-destroying oil and gas.

“They’re one of the the biggest energy company in the world and their greed is reducing our chance of keeping the Earth habitable.”

Extinction Rebellion say more actions will take place around Scotland over the next two weeks.