Ali Mohammed Sadegh is struggling due to rising bills from SSE and has resorted to eating out of date food. 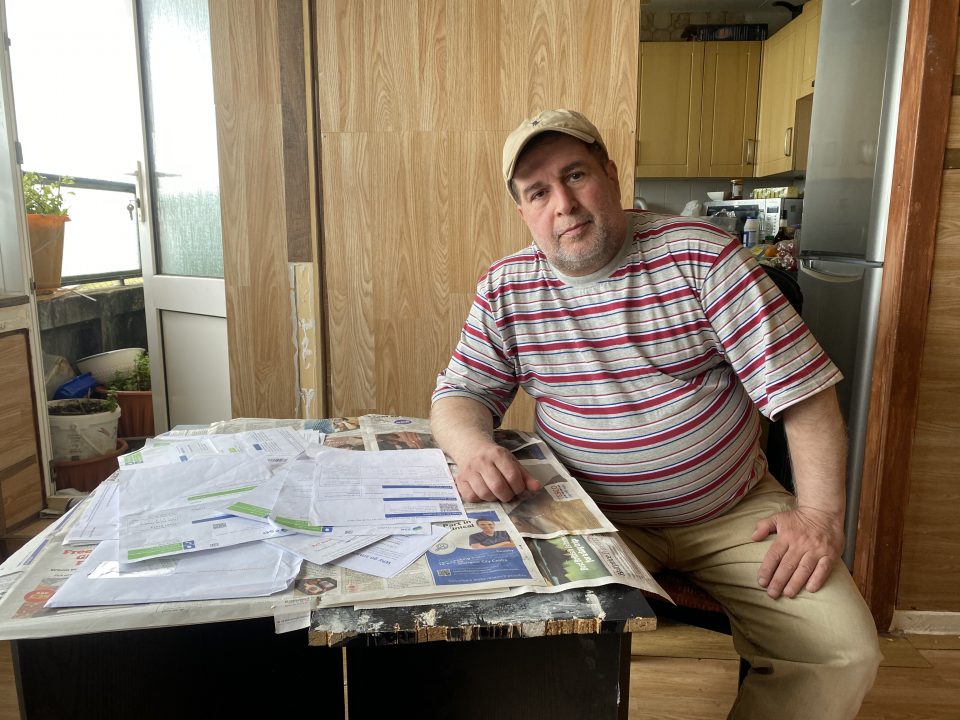 A cancer patient hit with a £4,000 energy bill has said he is eating mouldy and out of date food in a bid to keep costs down amid rising prices.

Ali Mohammed Sadegh, who is currently going through chemotherapy, has his heating supplied by energy firm SSE’s Wyndford heating plant in Glasgow.

The facility was designed to alleviate energy costs in the Maryhill area, but campaigners say 100% of the residents its supplying are now living in fuel poverty.

Ali explained that he owes £4,000 to SSE and that he has turned off both his hot water and heating.

“SSE has destroyed my life. It is a terrible company,” he told STV News. “My mental health is really bad.

“All people must pay the right payment. I don’t use it in the summer it is too hot. I open my window to sleep. Why am I being charged this much?

“I pay electricity and council tax. If it’s right, I pay it. This is not right. This is robbery.”

Ali, who had to give up his work as a restaurant chef following his diagnosis, has been relying on shopping in the yellow sticker aisle and eating out-of-date food to stave off hunger.

“Petrol prices are going up and food is going up,” he added.

“I don’t have the money to buy new. How is this saving my health?

“I don’t want to leave my house, it is a good area. But no one in Wyndford is happy.”

SSE owns the Wyndford district heating plant, which has supplied energy to homes in the area since 2011.

Despite claims it was designed to alleviate fuel poverty, residents have reported a rise in bills and claimed SSE have been “stonewalling” requests to enter negotiations.

The pensioner, who suffers from osteo-arthritis, said she plans to not turn her heating on at all this winter.

“I daresay most people will be doing the exact same this coming winter. It’s only going to get worse,” she said.

“Nearly my whole pension goes on my bills. It’s very difficult. What I’ve got has to keep me going for years to come.”

“I’m not sure I’ll manage in future with everything going up. I’m coping and just no more.”

Angie said she would like to be able to shop around for a better energy deal but the whole estate is locked in with SSE.

“You don’t know who to trust or to complain to,” she said. “It seems to be them making a big profit. It’s always the poorest that are going to be suffering.

“I think a lot of people will end up in severe poverty like the way things were in the old days, while the heads of the companies are getting their bonuses and pay rises.

“What are the government going to do about it?  I don’t how they will help people like us when they can’t sort things out in their own office.

“I hope we can get something sorted to help people on lower incomes. There are millions worse off than me.”

Nicholas Durie, secretary of the Wyndford Tenants Union, said no one in the community can afford their energy bills.

He said: “This scheme was designed to end fuel poverty. It has created 100% fuel poverty. In Scotland, that’s defined as 10% of your income on fuel and that’s everyone here, either in or out of work.

“SSE are running and managing this power station, they don’t own it, the housing association own it. So they lease it and are burning natural gas to make electricity for the grid. They’ve already made money from the sale of electricity so why are we being charged in line with the Ofgem price cap? It makes no sense.

“People can’t afford to run their radiators at all. They fear the standing charge. For a scheme that was meant to end fuel poverty, people here are colder than before they put the scheme in.

“SSE executives have never been in a situation where a tenner could change their life. That’s maybe one of the downsides of allowing in one of the ‘big six’ run what’s essentially public infrastructure in an area of low income housing.”

An SSE Enterprise spokesman said: “SSE has frozen bills for all its heat networks customers until May 2023. This means our customers will be shielded from the 80% rise UK domestic energy bill payers face from October 1 – as announced by Ofgem last week.

“We would also encourage anyone in Wyndford who needs additional help to get in touch with us directly so that we can discuss ways to support them.”