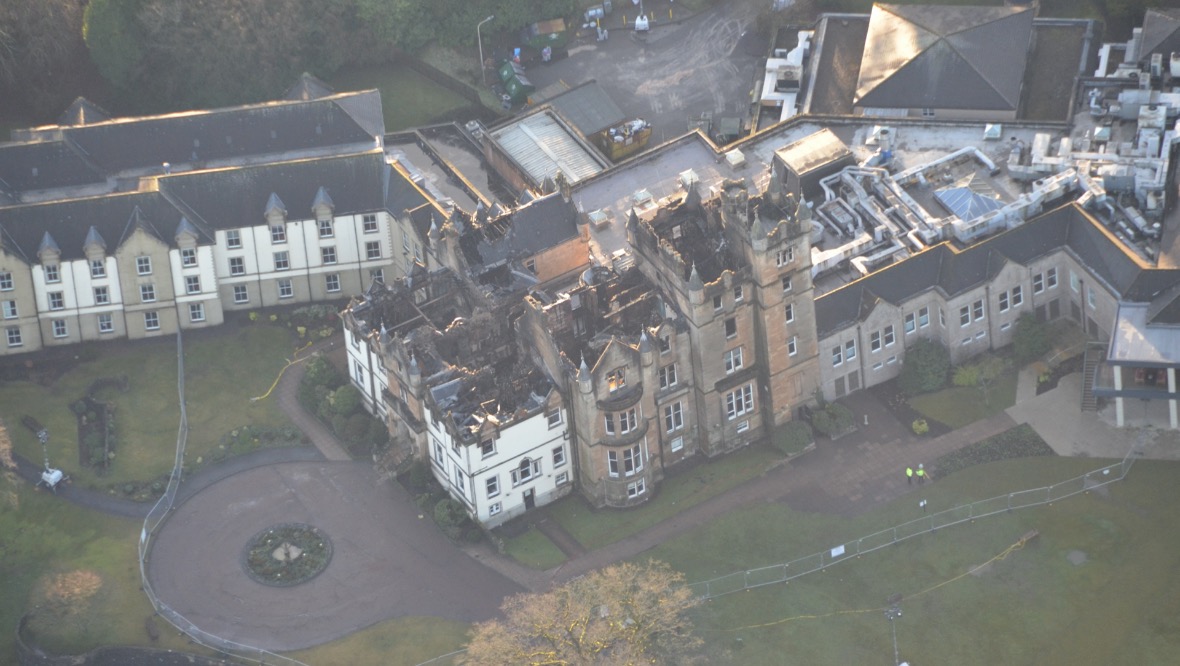 A fire at Cameron House hotel which killed two men was started after a night porter left ashes in a cupboard.

Simon Midgley and his partner Richard Dyson died after the blaze at the hotel, next to Loch Lomond, on December 18, 2017.

The fire ripped through the five-star resort at around 6.40am.

Mr Midgley died at the scene. Mr Dyson was taken to the Royal Alexandra Hospital in Paisley, where he was pronounced dead.

Cameron House Resort (Loch Lomond) Ltd, the owner and operator of the hotel, pleaded guilty on Friday to two charges of safety failures under the Fire Scotland Act, while night porter Christopher O’Malley admitted breaching the Health and Safety at Work Act.

Dumbarton Sheriff Court heard he emptied ashes and embers from an open fire in the main reception into a plastic bag before putting them in a cupboard.

Shortly before 6.40am an initial fire alarm sounded, to which staff noticed smoke coming from the cupboard. O’Malley opened the door, to which the flames took hold and spread into the hallway.

O’Malley and another two members of staff tried to battle the blaze with extinguishers, however they were overcome by the flames.

Firefighters arrived at the hotel by 6.51am, however they later had to withdraw from the building as it was showing signs of structural instability.

The fire was not brought under control until the early hours of December 19.

Mr Dyson, 38, from Wetherby in West Yorkshire, was a TV producer, while Mr Midgley, 32, of Worksop, Nottinghamshire, was a freelance journalist for the London Evening Standard while also running his own PR firm.

Peter Gray QC, representing Cameron House, said the failings were not deliberate breaches, but occurred “as a result of genuine errors”.

He said an absence of formal procedures for dealing with ashes and embers meant staff had to improvise.

Mr Gray said: “I am instructed to extend my deepest sympathies from the accused to the families of Mr Midgley and Mr Dyson.

“Cameron House Hotel is one of the leading hotels in Scotland, it takes pride in its reputation and sets itself the highest standards in relation to all that it does and endeavours to ensure the safety of its guests.

“It takes its duties to ensure the safety of its guests extremely seriously.”

The court heard the hotel operator had been warned of the risks of keeping combustibles in the cupboard during a fire safety audit, and the general manager had then highlighted the issue to staff.

Storage bins for the ash collected from open fires were kept in the rear yard of the hotel, however they had not been emptied since the October and were found to be rusty and not fit for purpose.

The court heard a plastic bag was used to dispose of ashes on December 15 and again on December 18, the latter with tragic consequences.

Cameron House was said to have cooperated fully with the investigation and all safety procedures were reviewed.

The hotel remains closed for refurbishment and is expected to open in the second part of this year.

Jackie Baillie, the MSP for Dumbarton, previously called for a quick and thorough investigation into the cause of the fire and has worked closely with Jane Midgley, Mr Midgley’s mother, in her campaign to be given answers as to why her son passed away.

Baillie said: “This is completely heartbreaking for all involved – not least for the families of Simon and Richard.

“After three long, painful years these families finally have the answers that they need as to why their beloved sons and brothers died in this fire.

“It is deeply concerning to learn that this fire could have been avoided, had the staff involved been given the proper training needed, and more importantly, had the hotel owners heeded the prior warnings given to them about their safety standards.

“The length of time that it has taken for this case to be concluded has caused the families involved undue stress and pain, during what is already an unimaginably difficult time for them.

“Going forward, steps must be taken by Cameron House to ensure that failings of this magnitude never happen again. We now know that these deaths were avoidable.

“My sympathies continue to be with families and loved ones of Simon and Richard.”

Sentencing will take place next week.