Veronica Martin contacted police after four black labrador puppies from a litter of 12 were stolen from her home. 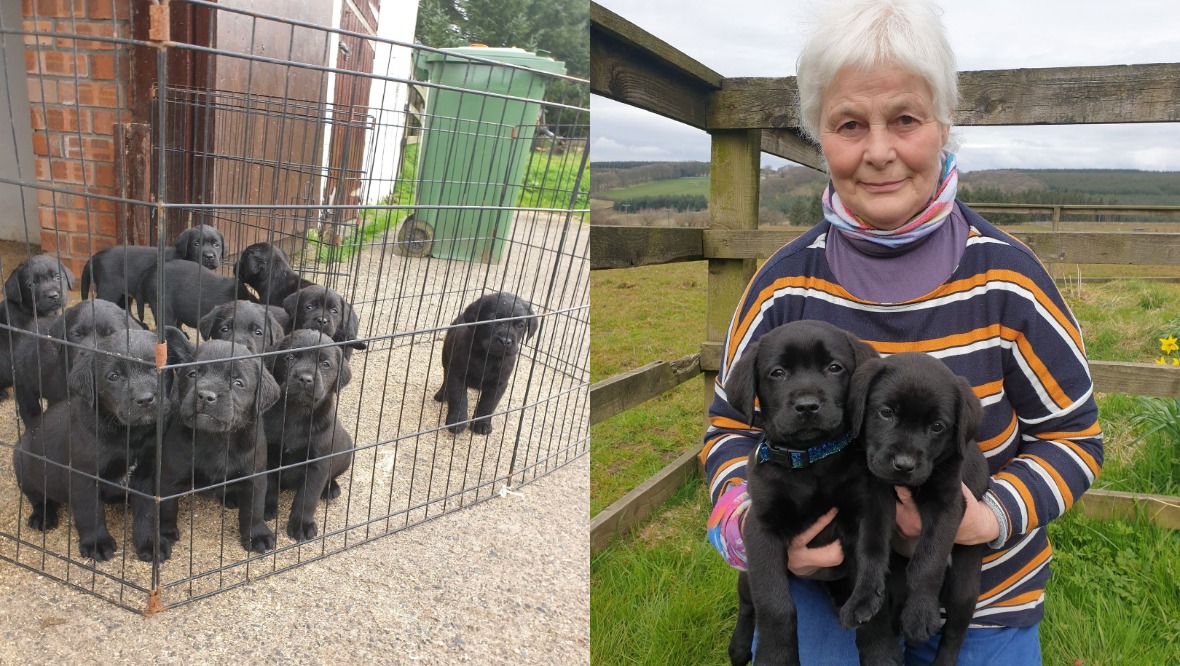 A dog breeder in Ayrshire has told how she was threatened and asked for ransom money after four of her black labrador puppies were stolen.

Veronica Martin contacted police and issued a public appeal for information on social media after coming downstairs and realising four of the litter of 12 had gone missing earlier this month.

Two of the four stolen puppies – Baby Bear and Billie – have since been found and returned due to tip-offs and local investigative work by people in the community.

Veronica used a photograph of the full litter of 12 puppies in her social media appeal once she realised that four of them had been stolen.

She then had the distressing task of having to inform those who had bought one of the stolen puppies.

Veronica said: “Within 48 hours of the puppies being stolen I then received calls from somebody wanting a ransom for the puppies and [who] was extremely threatening.

“It’s all been passed to the police but this is a horrible thing; they’re trawling the internet, looking at lost photographs, stolen photographs, of dogs and then getting in touch with the owners and demanding money.

“I had people in tears on the phone; two little girls who were inconsolable, a lady who had been on a waiting list for nearly a year for a puppy – that’s been very hard and it’s been very hard for the four families concerned.”

Murray Watson, a farmer from South Lanarkshire, bought one of the puppies that has been stolen and remains missing.

He said he was shocked and upset after hearing the news from Veronica, adding: “I woke up on the morning they were stolen and saw the photo on Facebook and I just instantly recognised the puppies.

“Being a breeder myself, you just don’t think it’s going to happen to you. I’m shocked it has happened so close to home and I’m also annoyed for Veronica.

“I’m just hoping they haven’t fallen into the wrong hands. It’s not fair for someone to take something that is not theirs and then sell these animals on like they’re second-hand objects.”

Veronica, who doesn’t advertise her puppies, says she believes the stolen dogs remain in the local area, adding that some of the stolen puppies were purchased through an advert that appeared on Gumtree.

She said: “It’s not through advertising that these puppies have been stolen, it’s some other reason. Somewhere else, somebody has found something about these puppies and been opportunist enough to take them and make money out of them – a tremendous amount of money.

“And then utter devastation at ringing four families who were expecting to pick up a puppy three or four days ahead of when these puppies were stolen.

A Police Scotland spokesperson said: “Around 8.55am on Saturday, April 10, we received a report that four puppies had been stolen from a property in Galston. Enquiries are ongoing.”