Five-year-old leaves hospital for first ever Christmas at home

Five-year-old Oscar Edgar has an undiagnosed condition which meant he had to be ventilated for more than four years. 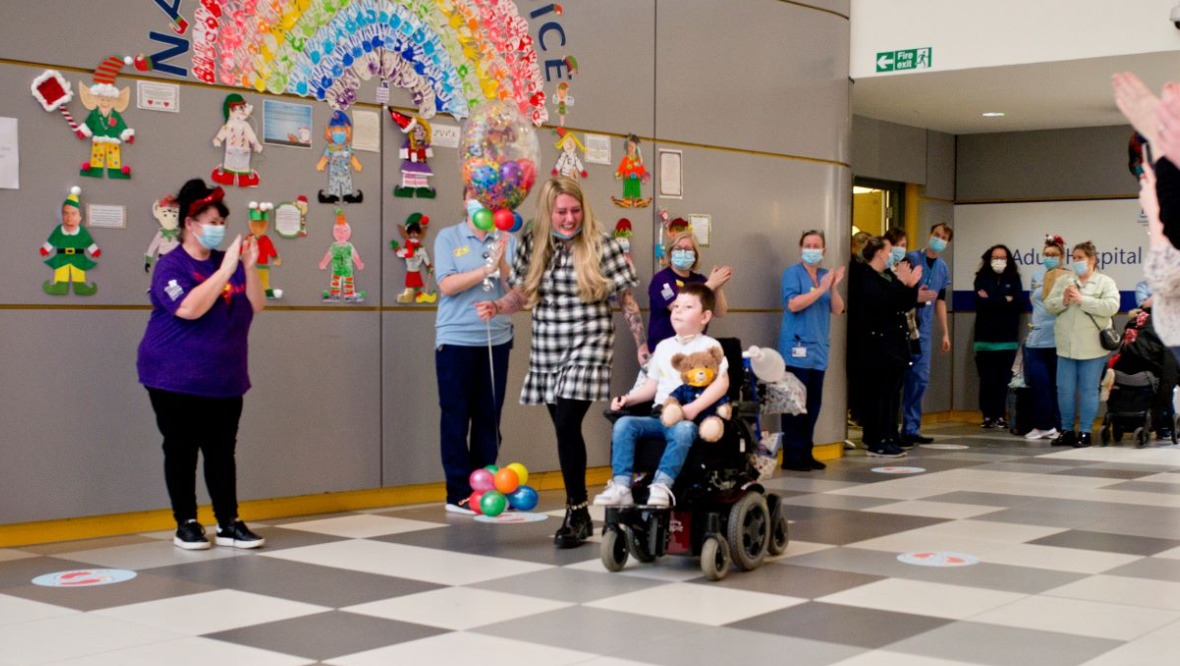 A five-old-boy who has spent almost his entire life in hospital has left for his first ever Christmas at home.

Oscar Edgar has been a patient of the Royal Hospital for Children in Glasgow since his birth in April 2015 and has an undiagnosed neurological/ muscular/respiratory condition which means he had to be ventilated for four-and-a-half years.

He is unable to eat or speak, but understands everything going on around him and has recently learned to walk.

While delighted to have Oscar home for Christmas after sometimes thinking the day would never come, his mum Megan said they were sad to leave the hospital that’s been his home for so long.

She said: “Everyone in that hospital loves Oscar and he loves all of them.

“From the doctors and nurses to the cleaners and catering staff – even the staff in the shops know Oscar because we’ve been there so long.

“It took us two hours to go round everyone and say goodbye. We honestly thought the day would never come.

‘We honestly thought the day would never come.’

“Oscar’s had the last rites on more than one occasion and the staff were there to support me every time.

“So now, to get him home a week before Christmas is like a dream come true.

“The thing I’m most excited about is being at home with him and my other son Theo [21 months] on Christmas Eve and waking up here and opening our presents together.

“That will be so special.”

Oscar’s journey up until now has been a complex one and has involved a number of different specialist medics.

Dr Phil Davies, consultant in paediatric respiratory medicine, said: “It has been a long and complex journey for Oscar and his family.

“Oscar has had a significant muscle weakness from just a few months of age and has needed a tracheostomy and a ventilator for most of his life to support his breathing.

“It has not only been a delight to see him make medical progress and be able to breathe by himself but also to see his cheeky personality develop.”

‘The nurses have been like family to us all – they didn’t just look after Oscar, they looked after me too.’

Mum Megan, 23, said: “I can’t put into words my gratitude to the Royal Hospital for Children and all the amazing staff.

“The nurses have been like family to us all – they didn’t just look after Oscar, they looked after me too.

“Oscar adores the nurses. Theo’s favourites are the cleaners and he tries to steal their mops to have a play.

“The hospital was my home too for eight months in 2017. I have grown with Oscar and I’m now able to operate all sorts of medical machinery. They made all that possible.”

Megan said she realised there was a long road ahead for her family, but right now is just looking forward to settling Oscar and home with her and his little brother.

She said: “On the few nights we’ve had him home for visits, Theo’s been climbing out of his cot to snuggle in with Oscar in his bed.

“He really misses him when he goes back into hospital so it will be lovely to be here and be settled together.”

Senior charge nurse Eleanor Selkirk said: “Whilst we were delighted to see him going home to be with mum and brother, we are all going to miss him very much and have, for the last few weeks, been saying our private goodbyes as we worked our last shifts with him.”