Beth McKenzie told her surgeon Roddy O'Kane she wouldn't blame him if she died during the procedure. 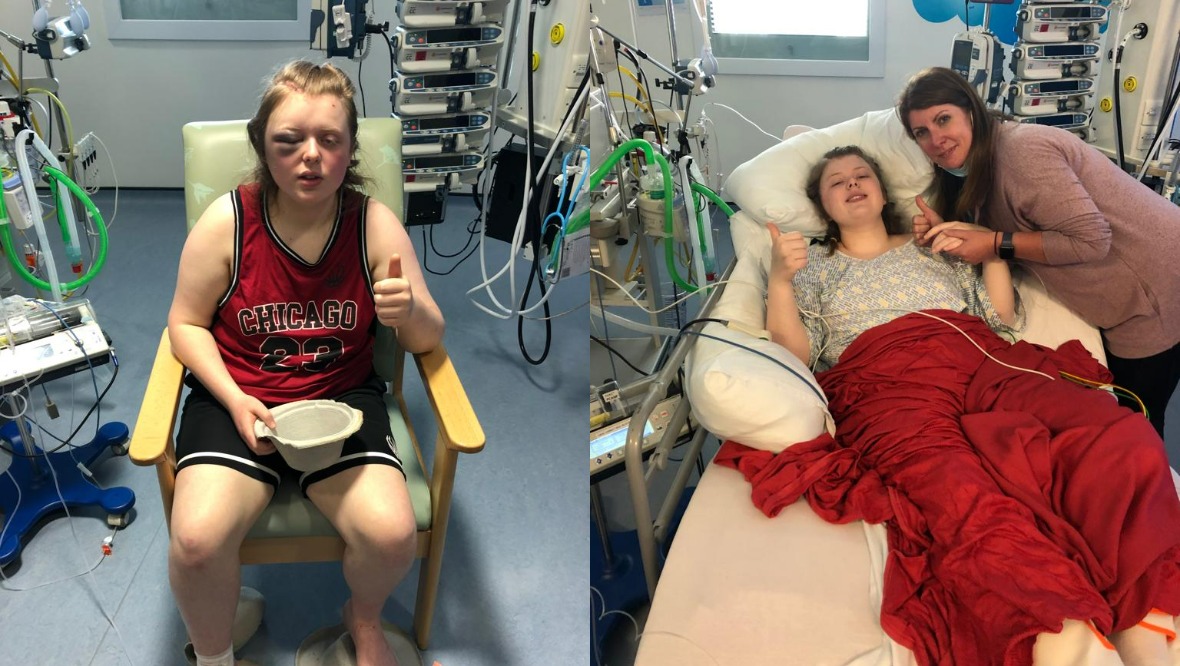 A teenager who underwent a gruelling operation to have a brain tumour the size of an orange removed told her surgeon she wouldn’t blame him if she died during the procedure.

Beth McKenzie from Blantyre in South Lanarkshire discovered she had a brain tumour after complaining of headaches and eye pain.

Her mother Clare took the 16-year-old to her GP where she underwent blood tests and had an optician check her eyes.

“It was a secondary cancer and she had it removed. But doctors couldn’t find the primary and she died,” Clare said.

“It all came flooding back. I was so worried when they said Beth had a tumour. It was tough to hear but you go on autopilot. I had to be strong for Beth.”

Beth was sent to the emergency department at the Royal Hospital for Children in Glasgow where neurosurgeon Roddy O’Kane was already on the case.

Roddy said he was moved by a note written by Beth which was handed to him before the surgery, in which the teenager said she wouldn’t blame him if she died during the operation.

The neurosurgeon said: “When I got to theatre, one of the nurses handed me a note. It said: ‘Mr O’Kane, thank you for saving me and treating me like an adult, telling me the truth. You’re right, I can take it. Thank you for doing everything you can, and if I didn’t make it in the end, thank you for trying. It’s not your fault. These things just happen. From Beth.’

“It certainly makes you skip a heartbeat and brings a tear to your eye. It is beautiful, innocent and sincere; the maturity, understanding and openness of it. I still have it in my wallet.”

Beth added: “I thought I was going to die. I wrote a note to Roddy saying that if I did die on the operating table, it wasn’t his fault. He was trying his best. I didn’t want him to feel responsible.

“Roddy and the team saved my life. I love Roddy, he gives a sense of hope and joy that you just cling on to.

“When I came round the first thing I saw out of one was my mum and dad at the bottom of my bed. Later on Roddy and the anaesthetist came to see me. I asked Roddy if I could header a ball yet and he said I couldn’t do that,” she added.

Mum Clare was relieved when the long operation was finally over.

She said: “Beth was still woozy with the drugs but she was smiling and cracking jokes, she still had her humour. It was such a relief I could have cried with happiness. She is the bravest person I know.

“Roddy was so upbeat, optimistic and funny and talked to Beth like an adult. He wanted to give her the respect she deserved as a young woman. He set our minds at ease and the nurses welcomed us.”

The family were told the next day that the tumour had been successfully removed but they faced a wait for the results of the biopsy.

However it was soon revealed Beth’s tumour was a Meningioma and non-malignant.

Clare said: “We were en-route to a holiday lodge for a few days when the call came in. When we got to our lodge the first thing we did was shout and ball to the family that it was benign. We had such a celebration.”

Beth recalled the moment: “I felt how you might feel if you were drowning and someone pulled you up; that first breath you gasp in. It was relief. I was so happy.”

Roddy recalls Beth’s tumour – a meningioma – was “the size of an orange” and surrounded by “a lot of important blood vessels.”

He explained: “You don’t want to sacrifice those, because that would cause the child a stroke and paralysis for life down the left side of the body.”

Roddy, who himself is a father to three children, said he empathised with Beth’s parents during her ordeal and said treating the teenager was rewarding.

Beth is now studying for her Higher exams just ten months on from her surgery.

He added: “My profession is the greatest reward. It is a beautiful thing to be able to do.

“There is a whole team of people who worked with me to get Beth through that journey, anaesthetists, theatre staff, nurses, physios, MRI, radiology, pathology, porters, canteen staff – the list is endless. I always get the thanks but I can’t do it without them.”