‘Be inspired and do one act of kindness for another person’

Glasgow businessman Amrik Singh passed away from coronavirus at a hospital in Birmingham on Wednesday. 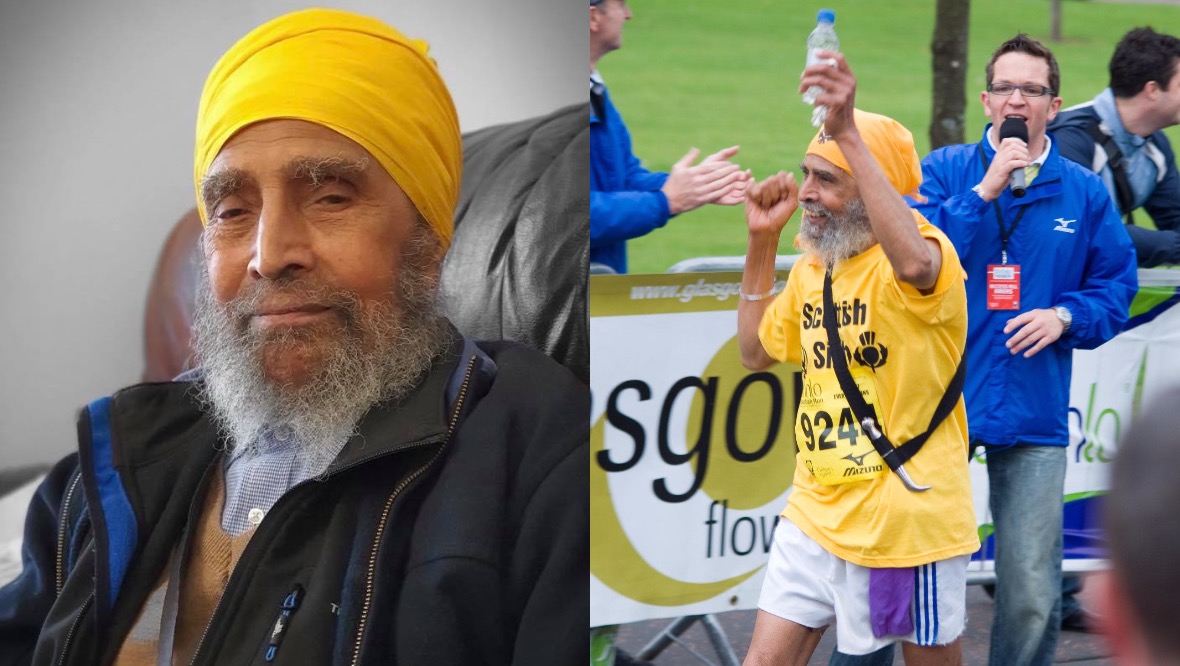 The family of a great-grandfather who died from coronavirus is urging others to “be inspired by him and do one act of kindness for another person”.

Glasgow businessman Amrik Singh passed away at a hospital in Birmingham on Wednesday.

A month before he fell ill, the 84-year-old had been carrying out charity work helping eye patients in India.

On his return to the UK, Mr Singh had been unable to travel back to his home in Scotland due to lockdown restrictions.

The first to act on his family’s wish is a member of the running club Mr Singh helped to establish.

Harmander Singh, from the Sikhs in the City club, has pledged to run a virtual London Marathon in his garden this weekend.

He is dedicating this test of endurance to his much-loved teammate, who ran more than 100 marathons during his lifetime.

The aim is to raise funds for the NHS.

Harmander told STV News: “We all have the fondest memories of Amrik.

“He was an inspiration. He never gave up.”

Mr Singh also inspired and helped to train the world’s oldest marathon runner, Fauja Singh, who turned 109 at the beginning of April.

Fauja is in India, where his family broke the news to him of his friend’s death.

Only three of the founding members of the running club remain.

In a short film shared with STV News, the elderly athletes are seen laughing like youngsters as they recover from the Edinburgh Marathon.

Harmander said: “Fauja had been doing 5k and 10k. It was Amrik who said ‘start running marathons like me’.

Mr Singh, who began long-distance running in his 40s, ran the London Marathon 26 times – with the last of his entries in his late 70s.

His grandson, Paman Singh, said his grandfather always wore his yellow ‘Scottish Sikh’ t-shirt during his races and really enjoyed representing Scotland all over the world.

Paman posted a moving tribute on social media and received hundreds of messages of condolence, including from former customers who knew his grandfather from his shop in Glasgow’s west end.

Paman said: “I posted just a tiny glimpse of the kindness that he showed through his life.

Paman said the family had nothing but praise for the staff at Birmingham City Hospital.

He said: “We can never repay the kindness they showed and the support they offered when we were unable to visit him.”

Mr Singh devoted much of his time after retirement to helping in the kitchen at Central Gurdwara Glasgow, which is currently delivering food to NHS staff.

His only request to his grandson was that he should continue with this work.

Due to the lockdown, only six people can attend Mr Singh’s funeral.

Paman added: “Many people have said ‘we wish we could honour him or pay our respects in some way’.

“The best way to do that is to do just one thing, one act of kindness for another person, and then smile about it and doff your cap to him, that’s what he would love.”