Staff claim the company failed to inform them of potential close Covid contacts and failed to close venues amid outbreaks. 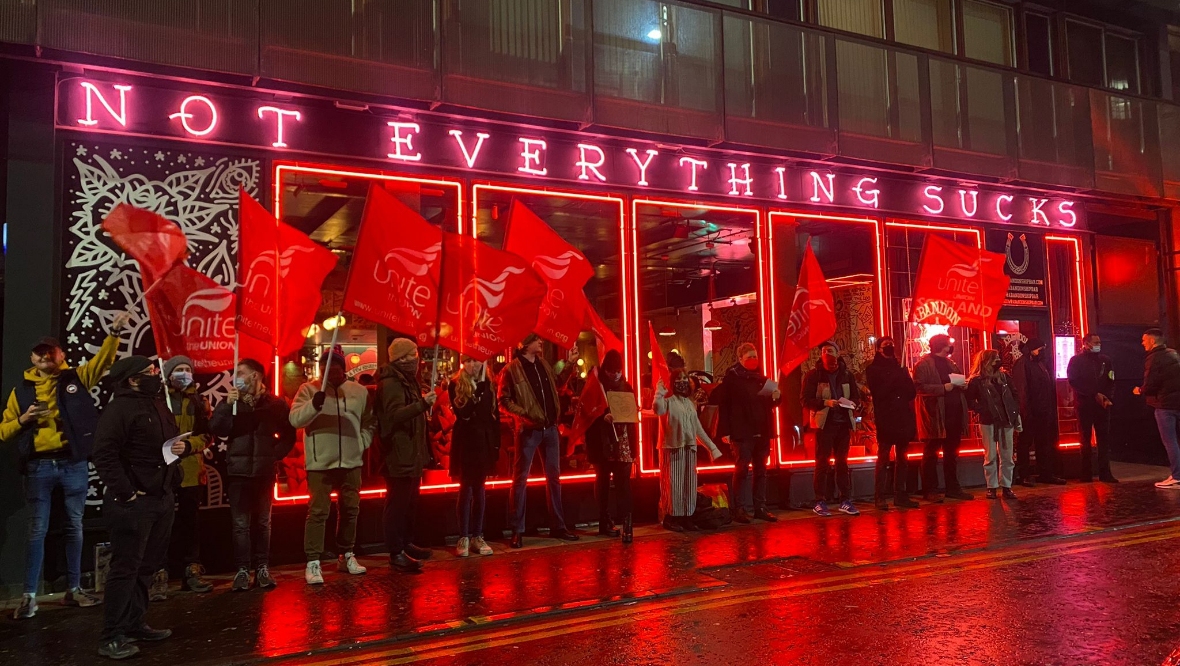 Hospitality workers protested outside a Glasgow city centre bar after accusing bosses of “systemic mistreatment” during the pandemic.

The protest, made up of staff members from 13 different venues across Glasgow and Dundee, took place outside the Abandon Ship bar on Saturday evening.

It comes after 70 per cent of MacMerry300 and Abandon Ship Ltd employees issued a collective grievance, claiming the company subjected them to various forms of mistreatment.

Staff claim the company failed to inform them of potential close Covid contacts and failed to close venues amid outbreaks, with employees being forced to keep working when sick or face disciplinary action.

They also allege that employees were not being paid sick and holiday pay and that there was ‘health code violations in kitchens across the company’ – with no hand soap or hot water provided.

The venues in question include the Abandon Ship Bar, in both Glasgow and Dundee, The Luchador in Glasgow, the Bird & Bear in Dundee, and Gracies in Broughty Ferry.

Protestors were also campaigning against the closure of Dundee bar The King of Islington, claiming that the bar is being temporarily shut due to having 100 per cent union membership from employees.

All the bars are owned by pub group MacMerry300, while some are co-owned by clothing firm Abandon Ship.

An anonymous employee of the company said: “Essentially there has been issues in the company for a long time with health and safety matters.

“People who were close contacts of Covid and were waiting on PCR results were told to come to work until it was official.

“A couple of these people turned positive.

“One even done a lateral flow test while at work that turned positive and was sent home.

“None of the venues were closed during this period, and because so many people had been testing positive staff felt uncomfortable coming into work.

“If anyone challenged this, they were told they would get given a disciplinary as its refusal to come to work.

“There was hand soap and cleaning roll missing, and only cold water available.

“We are hoping this protest brings proper change, and at least allows things to be discussed instead of shutting us off.

“We would love for them to reopen the King of Islington as there is not a viable reason for them to close it. It’s trade union victimisation.”

Better Than Zero, a trade union group for hospitality workers, said, “By coming together with such a decisive majority, these workers have set an incredible example for the rest of the hospitality industry, and for precarious workers everywhere.

“The issues they have experienced, sadly, are all too common in hospitality. We hope their example will inspire others to stand up and say “no more”.

Unite Hospitality said: “Despite originally agreeing to meet to discuss the serious issues raised by 70% of staff, the Director of Macmerry 300 – Phil Donaldson is now refusing to communicate and wants to go through lawyers rather than speak to his workers collectively.

“We would urge him and other directors to heed the requests of a majority of their staff and meet with the union which represents the workforce.”

MacMerry300 and Abandon Ship Ltd were contacted for comment.