Activists pour ‘oil’ and chain themselves to gates ahead of COP26

Protest action heats up across Glasgow with more than 120 world leaders set to arrive for UN climate change conference. 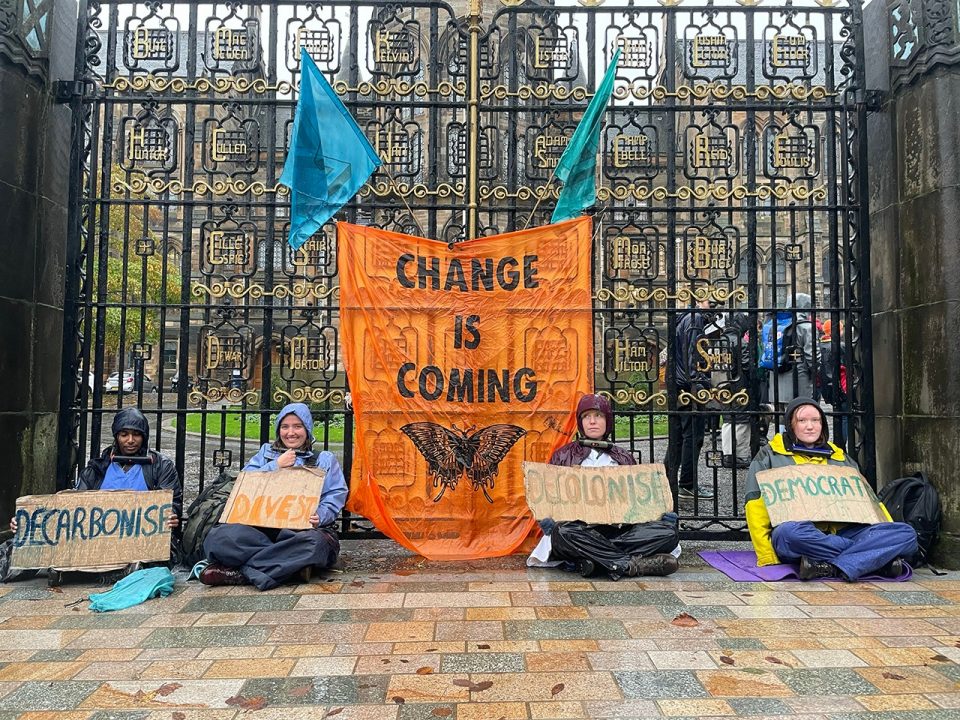 Protest action is ramping up across Glasgow as the city prepares to welcome more than 120 world leaders for the UN COP26 climate change summit.

Activists from Ocean Rebellion wearing oil canisters participated in a protest near the Hydro on Friday morning, pouring golden syrup onto the ground just across the river from where the summit is taking place.

It came just days after the group held a similar protest on the banks of the River Clyde featuring a protester dressed as Prime Minister Boris Johnson and a boat that was set on fire.

In a statement on social media, the group said: “Our oil head characters poured 75 litres of ‘oil’ on the ground outside the Glasgow venue of the COP26 climate change conference that kicks off on Sunday.

“The sticky oily mess was cleaned up by our dirty scrubbers, a band of ‘cleaners’ who’ll greenwash anyone’s dirty business.”

Meanwhile, four activists from Extinction Rebellion have locked themselves to the memorial gate at the University of Glasgow.

The activists, all students, are calling on vice chancellor Anton Muscatelli to commit the university to implementing the University of Glasgow Green New Deal.

Protester Vidya Nanthakumar, 21, said: “We have locked ourselves to this gate because we are so frustrated that the university refuses to take the urgent action the climate crisis demands. In their meeting with the vice chancellor yesterday, the Green New Deal Coalition were only offered more talk, more dither, more delay.

“We are already in a climate crisis, we cannot afford to wait.”

The deal includes 60 demands which would “end the university’s countless ecologically destructive practices”, according to protesters.

A University of Glasgow spokesperson said: “We were the first university in Scotland to declare a climate emergency and we have since published our response to that emergency, which commits us to the ambitious target of achieving net carbon neutrality by 2030.

“The principal met with students yesterday who are concerned about the climate crisis and are encouraging the university to move further and faster.

“We continue to welcome views from across our community and we will continue to work with our various student bodies to reach our ambitious carbon reduction targets.”

World leaders are preparing to head to Glasgow for the crucial COP26 climate summit, where countries are under pressure to increase their ambition to tackle the greenhouse gas emissions driving climate change.

The two-week conference is being seen as key to increasing action on cutting emissions to deliver on the pledges in the global Paris Agreement to limit temperature rises to “well below” 2C, and try for the safer 1.5C goal.

Up to 10,000 officers will be deployed every day during the gathering of global leaders, with Scotland’s forces being bolstered by police from other parts of the UK.

Firearms officers, dog handlers, mounted branch, search teams and the marine unit will all be used in what will be the largest police operation ever undertaken in Scotland.

Police Scotland have said they will deal “more quickly” with protesters who disrupt main traffic routes during the conference.

Senior officers have stressed the tone of policing will be “friendly” but said they will deal “swiftly and robustly” with protesters who cause violence or damage.