Parts of Scotland have been warned to expect severe gales as Storm Brendan sweeps across the country. 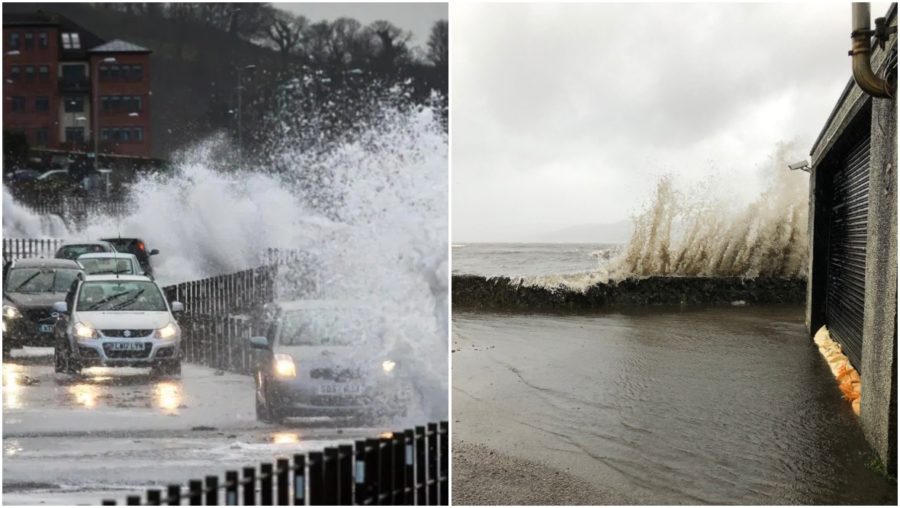 Parts of Scotland are being battered by severe gales of up to 90mph as Storm Brendan sweeps across the country.

The Met Office issued a yellow weather warning across most areas from 10am on Monday.

Winds of up to 65mph are affecting central parts of Scotland with the Outer Hebrides facing gusts as high as 90mph.

The stormy conditions reached central parts of the country around midday and are set to drift across to the north-east, mostly affecting areas in Aberdeenshire and Caithness.

The Western Isles council closed all schools to pupils on Monday morning.

All bus services on the islands were cancelled for the day and there is serious disruption to ferry routes.

A risk of flooding in Stornoway has been cited, while the Braighe Causeway on Lewis has been closed to all vehicles.

The majority of CalMac services have been cancelled with the last boat from Ardrossan to Arran departing at 9.45am.

Northlink Ferries also told passengers there may be disruption on services to Orkney and Shetland.

Restrictions are placed on several bridges, with the Cromarty, Dornoch, Skye and Kessock bridges among those closed to high-sided vehicles.

Train services will not run through Saltcoats station due to waves crashing on to the line.

ScotRail shared footage from the area and wrote: “This is what we’re up against today. For fairly obvious reasons, we can’t run trains in these conditions.”

The A83 has also been closed between Lochgilphead and Ardrishaig due to heavy rain and strong gales.

Some visitor attractions are also affected, with Dumbarton Castle and Dundonald Castle shut due to the weather.

Edinburgh Zoo said the last admission was at 1pm due to Storm Brendan.

Ahead of the storm, STV’s meteorologist Sean Batty said: “All areas are at risk of seeing gusts up to 55mph.

“The north Aberdeenshire coast and the Northern Isles could get gusts up to 65mph, but the highest will be across the Hebrides and north-west coast where gusts of 80mph are possible.

“If gusts do reach 80mph in the Western Isles, these will be the strongest low level gusts recorded since 2018.”

It also warned of short term power loss in some areas.

A spokesperson said: “The strongest winds are expected around exposed coasts and hills.

“Here gusts of 60-70 mph are likely, with a few sites perhaps seeing gusts to 80mph – especially around Irish Sea coasts and around the west coast of Scotland where the strongest winds are most likely.

“Gusts will be lower inland with 45-55 mph likely. A narrow band of squally heavy rain moving east, accompanying the strongest winds, may be an additional hazard.”

The Scottish Environment Protection Agency (Sepa) has issued three flood warnings and 16 flood alerts around the country, warning of a risk of coastal flooding.

Sepa said: “The Met Office has forecast strong and sustained winds from Monday morning, January 13, through much of the week.

“Combined with naturally high tides next week, the sustained winds will create an unusual and dangerous combination of tide, storm surge and inshore waves.

“There is therefore a risk of coastal flooding to all Scotland’s coastal areas. The highest risk is around high tides from midday Monday through to Tuesday afternoon.

“There is a flooding risk to coastal road and rail routes and coastal communities right around Scotland’s coastline.”