Storm Ciara: Damage and disruption as gales and rain blow in

A pub collapsed in Perth, while a bus was blown into a ditch in Aberdeenshire. 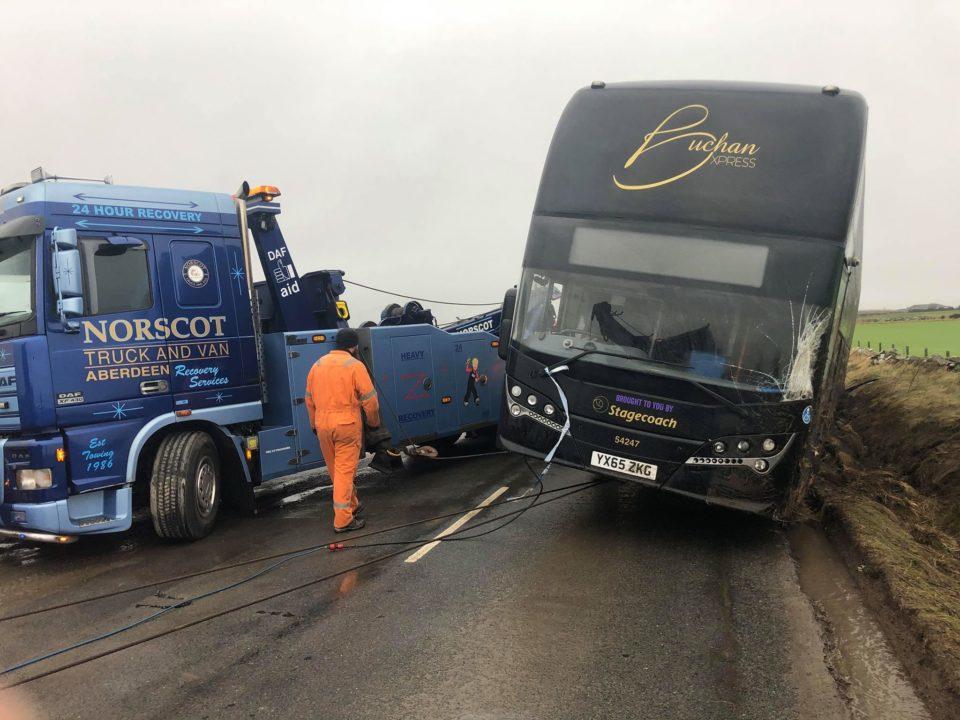 Three people were injured after part of a pub roof collapsed as Storm Ciara sweeps across the country.

Emergency services were called to the scene in St John Street, Perth, at around 7.25pm on Saturday.

The fire service said three people were passed into the care of the ambulance service.

Police said a cordon has been put in place around the area until the damage can be assessed by experts.

In a post on Facebook, staff at The Venue said: “Unluckily tonight our neighbouring building’s chimney breast fell through our roof causing the roof to cave in and the top front of our building to be dislodged.

“Thankfully nobody has been seriously harmed but the business will be closed until we find out the extent of the damage caused to our building.

“A big thanks to the emergency services, Perth police, fire and ambulance for all their help.

“We will not know anything more until the professionals have finished their surveying.

“Massive thanks to all our customers and friends concerns and we hope to see you all very soon.”

Police said no one had been seriously injured.

A Scottish Fire and Rescue Service spokesman said: “We were alerted at 7.25pm on Saturday, February 8, to reports of a structural collapse on St John Street, Perth.

“Operations control mobilised two appliances and a height vehicle to the scene, where the chimney of a tenement building had collapsed.

“Three casualties were handed into the care of the Scottish Ambulance Service.”

In Aberdeenshire, a coach overturned into a ditch due to the severe gales on the B9000 near Newburgh.

The accident happened at around 6.45pm on Saturday.

Police said no one was seriously hurt, but one person suffered a slight injury to their knee.

The bus was eventually recovered on Sunday morning.

A Police Scotland spokesman said: “Police were called at around 6.45pm on Saturday to reports of a bus on its side on the B9000 at Newburgh.

“The ambulance service was called, but there were no reports of serious injuries.

“There was one minor injury to someone’s knee, but nothing serious.

Part of a cafe and guest house collapsed into a river as Storm Ciara battered Scotland with high winds and heavy rain.

Police were called to Bridge House Guest House and Sonia’s Bistro in Hawick in the Scottish Borders at around 9.30am on Sunday to reports of structural damage.

Emergency services said the building on Sandbed had been evacuated and there were no reports of any injuries.

Authorities have warned the storm is likely to cause “significant disruption” and transport is likely to be affected.

The Met Office has issued yellow warnings of strong winds across Scotland on Sunday with gusts of up to 80mph possible in some areas.

It warns winds and flying debris may pose a danger to life while there may also be damage to buildings, travel disruption and power cuts.

An amber warning of heavy rain in the Borders was also in force from 2am to 10am on Sunday.

Homes and businesses could flood, with a chance some communities may be cut off by flooded roads.

There is also the potential of danger to life from fast-flowing or deep floodwater.

A multi-agency response team – based at the Traffic Scotland national control centre in South Queensferry, West Lothian, will be operational for the duration of the weather warnings to monitor the conditions and “help deploy response teams where necessary”.

Transport secretary Michael Matheson said: “The Met Office is telling us that we are facing a prolonged period of adverse weather, with Storm Ciara bringing strong winds and rain to most of Scotland this weekend.

“We’re also being told to expect snow and high winds throughout Monday and on Tuesday morning, so there is the potential for significant disruption on the trunk road network, as well as other modes of transport.

“It’s important that people check the latest information before they set off, drive to the conditions and follow Police Scotland travel advice.”

Shortly after 11am on Sunday, Edinburgh Waverley railway station was closed to new customers due to overcrowding.

Passenger Russell Roberts posted a picture of the long queues onto Twitter, and joked: “When I was belting out ‘I would walk 500 miles’ last night I didn’t actually think I would be.”

At around 12.10pm, Traffic Scotland advised that the Forth Road Bridge had been closed to all vehicles, while the Queensferry Crossing had been shut to double-decker buses due to the wind.

Shortly after 5pm, double-deckers were permitted along the Queensferry Crossing.

The Forth Road Bridge was also reopened, except to vehicles with trailers, motorcycles, cyclists and pedestrians.

Network Rail said winds of up to 90mph are expected on the West Highland Line and the Inverness to Kyle of Lochalsh routes on Sunday and services will be suspended during the worst of the weather.

Ferry company Caledonian MacBrayne warned there is a “very high possibility of weather-related disruption to services” across all 28 of its routes and advised people to keep track of the status of their sailing online and on social media and to be prepared for delays and cancellations.

“Avoid crashing waves and follow the advice of emergency services and local councils.”

Inspector Davy Hynd, of Police Scotland’s Road Policing Unit, added: “There is a high risk of disruption in the affected area and, if you do travel, you are likely to experience significant delays.

“If you must travel please plan your route, as well as alternative routes, in advance.”

Stay safe in a storm