Tiger Woods brings star power to Fife but can he win the Open once again?

Woods is seeking to win his fourth Claret Jug - and third at St Andrews - at this week's 150th Open Championship. 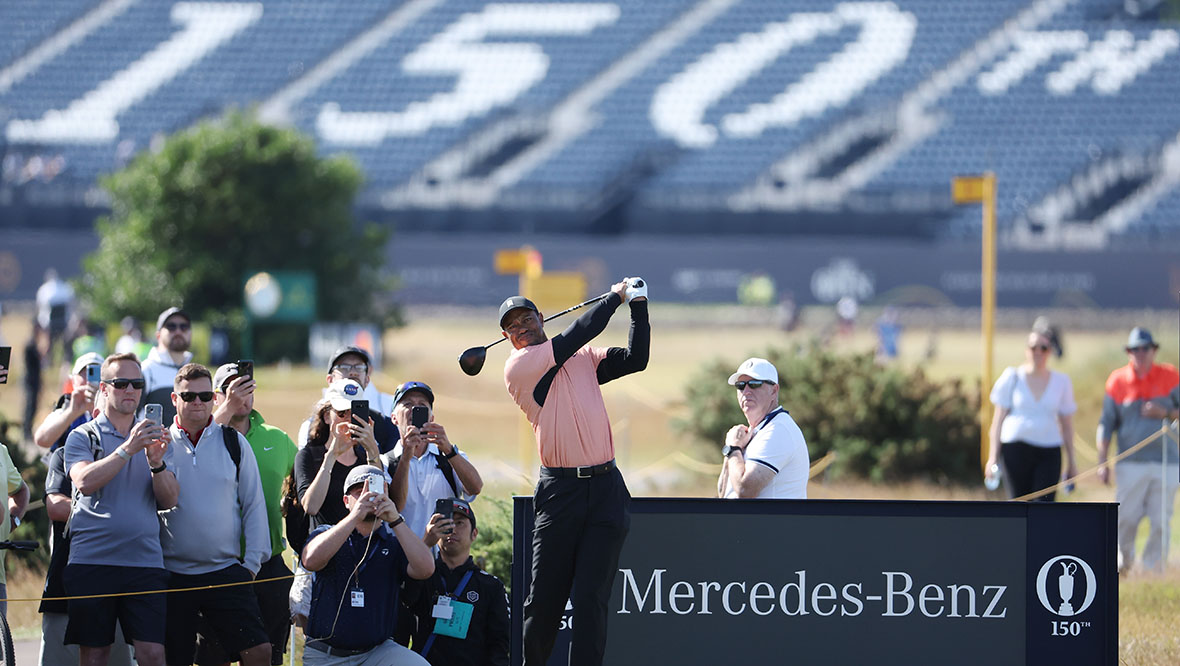 The world’s top golfers are descending on north-east Fife for the 150th Open Championship.

St Andrews’ Old Course is the host for the historic occasion, with almost 300,000 people set to attend the famous links this week – a record crowd.

And among the star attractions is undoubtedly Tiger Woods, who has many fond memories of playing at St Andrews.

He won two of his 15 majors at the course – in 2000 and 2005 – and is looking to win his fourth Claret Jug in total when the action gets under way on Thursday.

How fit is Tiger?

Woods withdrew from the US PGA in May after a third round of 79 and skipped last month’s US Open to give his body more time to recover for St Andrews.

The 46-year-old suffered multiple leg injuries and was lucky to be alive after a car crash in California in February, 2021. He later admitted he feared his leg would be amputated.

Those were stabilised by a rod in the tibia. A combination of screws and pins were used to stabilise additional injuries in the ankle and foot.

Despite that horror crash, Woods made a miraculous comeback at the Masters in April.

Is he feeling confident of winning another Claret Jug?

Woods’ problem is a lack of recent competitive experience, having not played since the US PGA – only his second event of the year.

“The biggest challenge is I’m not playing tournament golf to get tournament ready for the majors,” he said.

“I’m not hitting shots in tournaments to know what works and what doesn’t work.”

Links golf – especially on courses like St Andrews this week, which is running hard and fast – levels the playing field somewhat for the players who are not the biggest hitters.

Woods cited the example of Tom Watson, who came within an up-and-down from the back of the 18th green of winning a sixth Open at Turnberry in 2009 just a few weeks short of his 60th birthday.

“My body certainly can get better, but realistically, not a whole lot. It’s been through a lot, and at 46 you don’t quite heal as well as you do at 26 so it is what it is,” he added.

“(We’re) just lucky enough, in our sport, to be able to play as long as we are able to play late into the 40s and especially on links golf courses like this, you can continue into your 50s.

Debut appearance at the Old Course in 1995

Woods made his debut appearance at St Andrews as a 19-year-old amateur in 1995. He broke par just once and shot a final-round 78 to finish at 295, seven over par.

But he did finish a shot ahead of all-time great Jack Nicklaus, who closed with a 71.

Five years later, Woods was well and truly at the top of his game when he won at St Andrews for the first time in 2000, playing some of the best golf the sport has ever seen.

When he arrived in Fife, the Open was the only major piece of silverware missing from his trophy cabinet having already won the Masters, PGA Championship and US Open.

Woods, who closed with a 69, was the third Champion after Greg Norman and Nick Price to have four rounds under 70 and, at the age of 24, followed Gene Sarazen, Ben Hogan, Gary Player and Nicklaus in winning all four of the majors.

Having won the US Open at Pebble Beach by 15 strokes the previous month, he won the Open by eight strokes in equally dominant fashion in front of a record gallery of over 230,000 for the week.

Woods recorded a final score of 19 under par for the tournament, which was the lowest 72-hole score for all major championships – a record that stood for 15 years.

It also meant Woods became the youngest ever golfer to complete a career grand slam of major trophies.

Woods’ total of 269 strokes was a record for The Open at St Andrews and his winning margin was the tournament’s largest since JH Taylor won by eight in 1913.

Woods pipped Colin Montgomerie to win his second Open at St Andrews in 2005 – completing his second career grand slam in the process at the age of 29.

By Friday evening, Woods was leading by four strokes following rounds of 66 and 67. On the weekend he added scores of 71 and 70 to finish on 14 under par and win by five strokes from Montgomerie.

Earlier in the week, however, Woods had to share top billing with Nicklaus, who bowed out of The Open for the last time with a birdie on the 18th green on Friday evening.

A huge crowd lined the 18th fairway to provide an emotional send-off, the three-time Champion having stopped on the Swilken Bridge with his playing partners Luke Donald and Tom Watson.

Woods would go on to win consecutive Opens with victory at Royal Liverpool in Hoylake in 2006.

Unlike previous visits to the Old Course, Tiger won’t look back particularly fondly at his 2010 performance in St Andrews.

The tournament – won by Louis Oosthuizen – is perhaps best remembered for the atrocious weather that halted play on the Friday afternoon and saw several big names record big scores.

Oosthuizen was the exception to the rule, winning the 150th Anniversary Open by seven strokes – only Woods with an eight-stroke victory on the Old Course in 2000 had won by more since 1913.

The 144th Open featured one of the event’s best-ever finishes in which American Zach Johnson eventually triumphed in a four-hole play-off against 2010 champion Oosthuizen and Australia’s Marc Leishman.

The second round was notable for dramatic weather, with flooding on Friday closing the Old Course and gales on Saturday stopping play, but also saw the memorable farewells of Faldo – donning the sweater from his 1987 victory – and five-time champion Watson, for whom thousands lined the final fairway as darkness descended.

It wasn’t Woods’ finest hour, however, as he failed to make the cut and only appeared on the course at the weekend as a result of weather delays.