The 27-year-old will make his 50th appearance for the national team against the Republic of Ireland on Saturday. 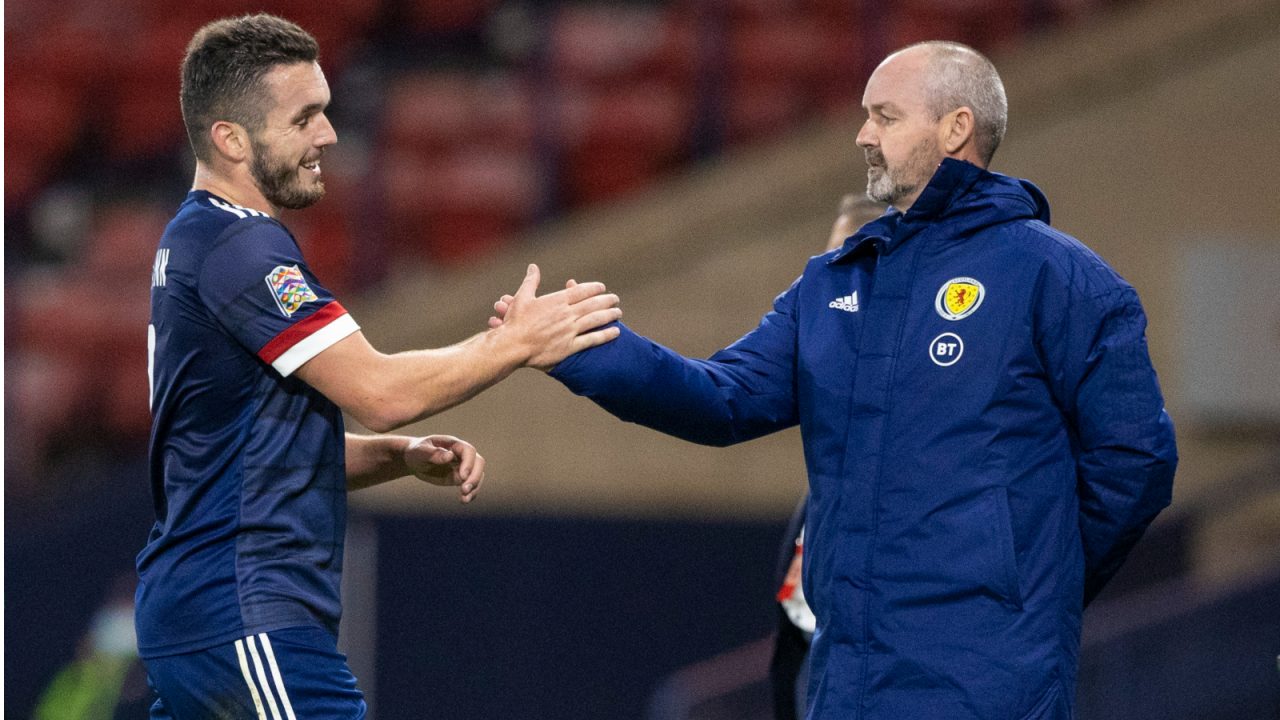 Steve Clarke hopes John McGinn plays for Scotland long enough to become only the second player in history to earn 100 caps for the men’s side.

The Aston Villa midfielder will make his 50th appearance for the national team against the Republic of Ireland on Saturday.

Clarke has handed the 27-year-old the captain’s armband in Andy Robertson’s absence and he led the side to an impressive 3-0 win over Ukraine on Wednesday night.

Since making his debut in 2016 the former Hibs and St Mirren star has scored 14 goals which puts him joint ninth in the all time scoring charts.

Clarke is a huge admirer and has backed him to can go on to emulate Kenny Dalglish by taking his cap total into triple figures.

He said: “You’ve just got to look at his contributions, his goalscoring record, his assists.

“He can play different midfield positions and he brings his own bubbly, bright personality into the group.

“He’s a key member of the squad on and off the pitch. I think he enjoys it when I push him a little bit further forward and he’s got the chance to get those goals and make those assists. It works well for us.

“I’m indebted to John for a lot of the good wins we’ve had because he’s managed to get the goals and the assists. Hopefully he can keep it going and get to 100 and get a few more goals and assists along the way.”

Clarke believes McGinn’s growth as an international player epitomises Scotland’s improvement since he took charge in 2019.

“John was in a lot of Scotland squads and he tells me about the time he was asked to run the line in one of the squads because he was surplus to requirements at the time,” the manager said.

“You have to understand there is a process and John accepted that and waited for his chance. That’s what you want.

“When I first came in, John’s age-group of players didn’t have that many caps and I said that over a period of time ‘you will pick up the caps and become more experienced and hopefully we’ll improve as a group’ and I think we’ve improved a lot as a group.”

The former Kilmarnock manager also explained why he has called St Mirren centre-back Declan Gallagher and Verona left-back Josh Doig into the Scotland squad for the remaining Nations League matches against the Republic of Ireland and Ukraine.

The pair were added to the group following the withdrawal through injury of Nathan Patterson and David Turnbull and Clarke insists he had no hesitation in adding the pair to the squad.

He said: “I know Declan from when he was in the squad before.

“He’s got experience – don’t forget he was part of the Euro 2020 squad and he had a fantastic match away in Serbia against (Aleksandar) Mitrovic so he’s got the qualities we might need over the next two games.

“Josh is the captain of the (Scotland) under-21s, he did very well at Hibs. He’s obviously in a position where we have good quality players but I just felt this was a chance to bring him up and show him there is a pathway and give him a chance to be around the squad.”