The mixed curling side will compete at the highest level in Switzerland this week. 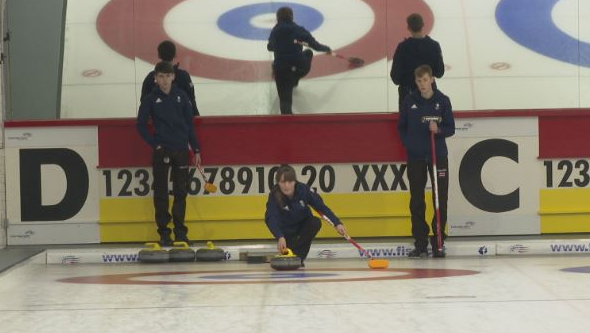 Four Scots teenagers are in Switzerland to represent Team GB at the Winter Youth Olympics.

The quartet will be in action from January 10.

For 15-year-old skipper Craik it’s a dream come true to be picked for the Games.

He told STV: “It means so much to me, when I read the email to say that I had got it I burst out in tears in my chemistry class, it just means so much to be following in the footsteps of the great people who have gone before me to these games, and yes, it’s just amazing..”

Unlike the Olympic games where there are male and female team, this is a mixed side for Team GB.

For Mitchell, being picked for the games is still sinking in.

“It’s quite overwhelming,” she said. “I didn’t really know what to expect, it’s just a bit weird, I still don’t quite believe it even when I’ve got the kit, it’s all just a bit overwhelming, but it’s exciting when we get out there just to see what it’s like.”

Rankin from Moray, won’t be the first Olympic curler in his family. Mum Janice was part of the Team GB side that brought home gold in 2002 but she hopes the team enjoy their time without the expectation of repeating medal success.

“I just want him and his teammates to go out and enjoy it because if they enjoy it they’re going to play well,” she said. “I don’t want them to put pressure on themselves.

“Obviously it would be fantastic if they could medal but at the end of the day what a great experience it will be for them and I want them to appreciate that and make the most of it.”

Jamie said: “I’ve definitely been asking her quite a lot of questions and she’s been telling me a bit more about her experience and the sort of things that happened when she was out in Salt Lake City, sort of similarities of what she experienced and what I will experience so I definitely have a wee bit of an insight into what will happen when I’m out there.”