Ukraine were 3-1 winners in the semi-final at Hampden Park. 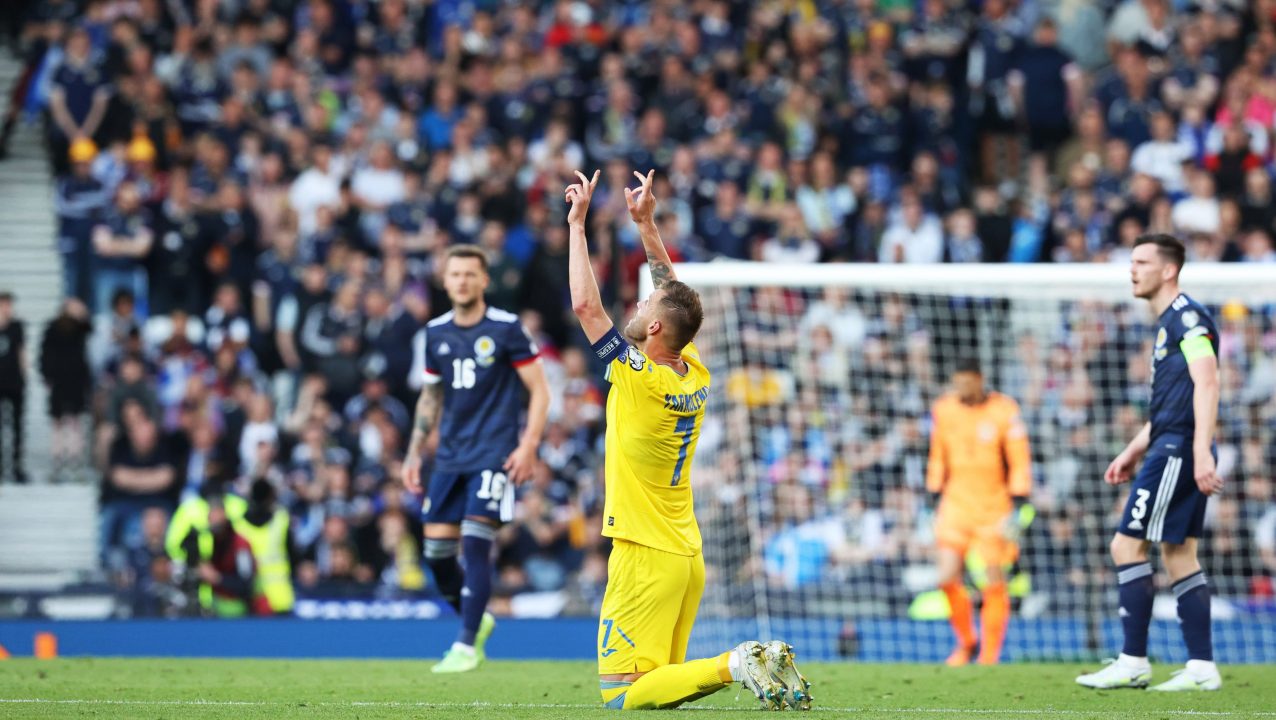 Scotland’s hopes of reaching the World Cup finals ended with a 3-1 defeat to Ukraine on an emotional night at the national stadium.

Goals from Andriy Yarmalenko, Roman Yaremchuk and Artem Dovbyk put the war-torn nation into Sunday’s play-off final against Wales and just 90 minutes away from reaching Qatar 2022.

Wednesday’s play-off match had originally been scheduled to take place in March but was postponed after Russia’s invasion of Ukraine.

Despite the trauma and emotion of the situation, Ukraine’s players put on an impressive display to be clear winners at Hampden.

Scotland’s players, staff and supporters had all expressed sympathy with the war-torn nation in the build-up to the match but at kick-off, the two sides went head to head both harbouring hopes of reaching the finals.

Ukraine had the first chance of the contest when Oleksandr Karavaev ran down the right and fed Viktor Tsygankov, whose shot forced Craig Gordon into a fingertip save.

Having served notice of the danger, the visitors then had a clear chance and should have scored when Andriy Yarmalenko found himself free in the centre of goal. Gordon got down to the shot but it squirmed under the goalkeeper and Hampden drew a gasp before he pounced on the loose ball as it rolled toward the goalline.

Scotland’s first chance came after 18 minutes when Grant Hanley headed over from a corner but Ukraine were having the best of the possession. Roman Yaremchuk fired wide as the visitors began to get more comfortable in the opposition half.

Andy Robertson was next to try his luck after working his way into the box, then John McGinn put an effort over the bar from outside the box after Che Adams and Callum McGregor had combined well on the left.

Just after the half hour mark, Ukraine were ahead and with the simplest of goals. A long ball from the back got behind the Scotland defence and fell to the feet of Yarmolenko, who took a touch before lifting his shot over the onrushing Gordon and into the net.

The action continued at a frantic pace but Scotland were struggling to retain the ball and Ukraine were causing consternation as they regularly tested the centre of defence. Half time came with Scotland second best and needing quick improvement if they were to save their World Cup dreams.

Clarke made a change at the break, bringing Ryan Christie on for Lyndon Dykes.

The change hadn’t had time to make any impact when Scotland were two goals down. A cross from the right by Karavaev was headed back into the opposite corner by Yaremchuk with Gordon nowhere near being able to save.

The Ukrainian forward, who had already been booked, and seven of his teammates leapt the advertising hoardings to celebrate with their fans. Dutch referee Danny Makkelie chose not to punish the emotional moment with yellow cards.

Scotland were toiling and Ukraine looked more likely to add to their tally but a chance did come after 56 minutes. Ukraine keeper Georgiy Buschan dallied before clearing and McGregor charged down the ball but saw it bounce over the bar.

With a huge turnaround needed, the hosts started to push forward and enjoy more as Ukraine sat on what they had.  The final ball was lacking but there was a huge chance to get back in the game on 66 minutes. Scott McTominay made a foray forward and his shot across goal wasn’t dealt with by Buschan. The ball fell for McGinn and it seemed like the midfielder had the easiest of tasks to nod in but he headed agonisingly wide.

Stuart Armstrong and Jack Hendry came on for Billy Gilmour and Liam Cooper as Scotland looked to up the pace and whether Ukraine were tiring or Scotland’s changes had lifted the team wasn’t clear but the balance of play seemed to be shifting.

Armstrong saw an effort on goal smothered but despite being on the front foot, Scotland couldn’t find what was needed. Adams burst forward and tested Buschan twice before a McGinn effort was deflected over.

Ukraine made changes of their own to freshen up their side and with just fifteen minutes to go, looking more and more comfortable despite Scotland’s efforts.

That changed in the 78th minute. McGregor hit a shot that Buschan made a mess of, the ball palmed into the net and despite Taras Stepanenko’s clearance, it had crossed the line and Scotland had a goal back.

Confirmation of the goal had Hampden roaring and hope was restored.

Christie was making a real difference, and Hanley was forward at every opportunity as Scotland threw everything at it but the clock was counting down.

The announcement of four additional minutes brought a cheer and a corner seconds later lifted the support. Hanley headed wide and another chance had gone.

Oleksandr Zubkov was close to putting it beyond doubt on a rare Ukraine attack but his shot flashed wide.

After passing up that chance, Ukraine didn’t miss their next. Artem Dovbyk raced on to a through ball and drilled his shot past Gordon to put his side into the play-off final and end Scotland’s World Cup bid.