Scotland left it late to beat Austria at Hampden in a World Cup playoff semi-final. 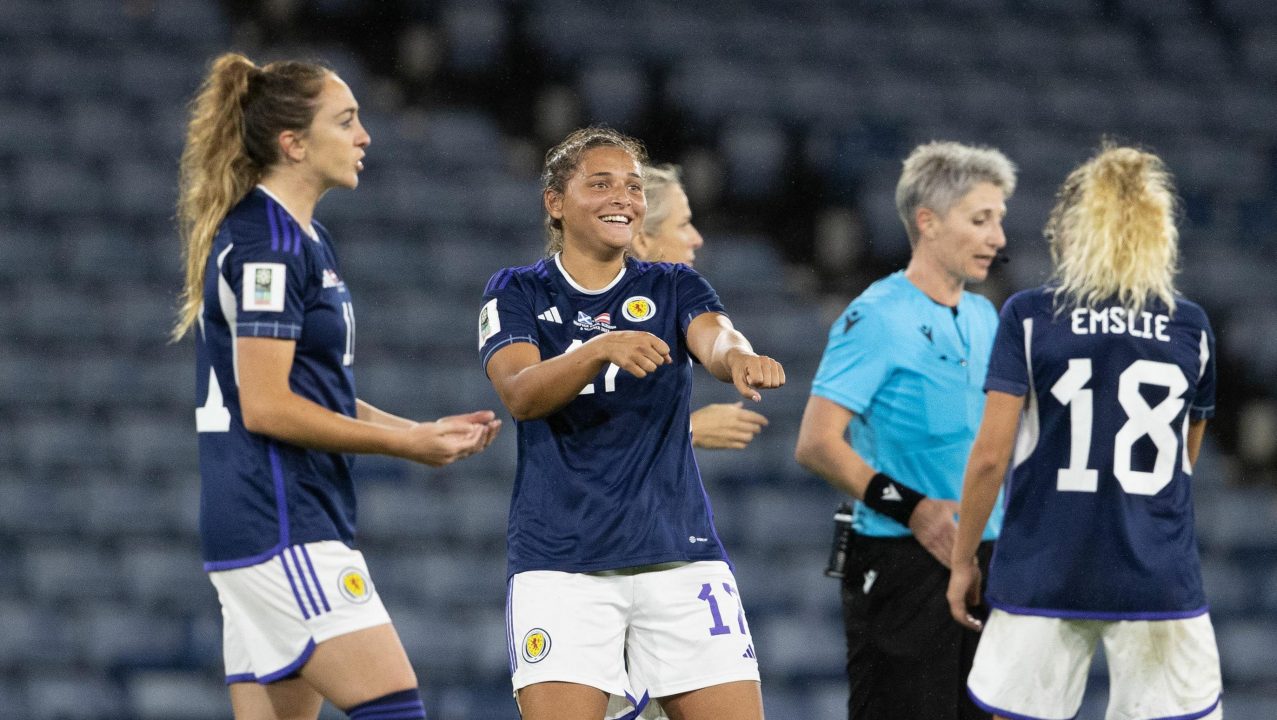 Scotland are potentially one win away from a place at next year’s Women’s World Cup after a 1-0 win over Austria at Hampden.

A record crowd for a competitive Scotland women’s game arrived at the national stadium with optimism and created a good atmosphere.

And the 10,000 strong Tartan Army were kept waiting until the 92nd minute but Abi Harrison’s extra-time winner was worth waiting for as it keeps Scotland’s World Cup dreams alive and secures a playoff final at home against Republic of Ireland next week.

Pedro Martinez Losa’s side came up against a tough Austria side and an extra 30 mins were required to establish a winner after a 0-0 draw in a rainy night in Glasgow.

But Harrison’s headed goal was enough to separate the sides in the end as Scotland march on to the next stage of qualifying.

A confusing playoff process will now continue for the Scots with only two of the three European winners from next week’s finals qualifying for Australia and New Zealand directly and the other having to endure another mini tournament for the final place down under.

Real Madrid star Caroline Weir started in a midfield three alongside Erin Cutbhert and Sam Kerr with Lana Cleland was in a front three alongside Manchester United’s Martha Thomas and Claire Elmslie.

Captain Rachel Corsie was named in defence alongside Evans, Howard and Docherty with Lee Gibson in goals.

Scotland went into the game knowing a win would set up a game against Ireland, however only two of the three European playoff winners will qualify directly with the third entering another mini tournament with the final World Cup place on the line.

Scotland started the game well with Weir linking up with Elmslie and then Cleland to cause the Austrian defence early problems.

Losa’s side had the best of the opening stages and kept pressure on the Austrians with Thomas and Elmslie also having early opportunities.

Austria then had their first real chance of the game, but Weir was again involved and managed to turn Zadrizil’s shot away for a corner.

The Gibson was forced into action soon after when she tipped a shot from Billa over the bar just before the half time whistle.

The pace of the game died out a bit in the second half with both sides having spells of possession and created a string of half chances without any success.

With around ten minutes left on the clock Erin Cuthbert cut inside to create an opportunity but the Chelsea winger’s effort was well saved by the goalkeeper.

With extra time approaching Scotland nearly grabbed a dramatic late winner when but the header was turned around the post for a corner in the third minute of stoppage time.

Sophie Howard then had a chance from the corner, but her effort was well cleared by the Austria defence and the ref whistled for full-time and the teams prepared for extra-time.

Scotland finally got the all-important opening goal at the start of extra-time when Abi Harrison scored just two minutes after the restart.

The 24-year-old Bristol Rovers forward, who was brought on as a late second half sub, headed home a corner from Cuthbert to put Losa’s side in the driving seat and secure the win that keeps the World Cup dream alive.