Scotland were taught a lesson by Grand Slam-chasing France as Les Bleus bossed the test match at Murrayfield.

The French had not won a Six Nations match in Edinburgh since 2014 but punished the Scots remorselessly over 80 action-packed minutes.

Gregor Townsend’s side had recovered from a nightmare start to get right back in the contest but were undone by a series of mistakes that Fabien Galthie’s team ruthlessly exploited.

Rory Darge, making his first start on his second cap, won an early turnover but Scotland were punished for trying to play from deep, with Jullien Marchand winning a penalty.

However Melvyn Jaminet surprisingly screwed his kick wide from under the shadow of the posts.

The let off was not to last for the Scots and Dupont launched an incisive counter attack from his own 22, offloading for Cyril Baille to drive to within five metres of the line.

France recycled quickly for Paul Willemse to crash over and the conversion made it 7-0 after eight minutes.

Darcy Graham was taken in the air after the re-start which allowed Finn Russell to reduce the deficit to 7-3 three minutes later.

France were relentless though and a brilliant 50/22 kick from Jaminet set up another devastating attack. From the lineout the visitors swung to the right wing where Baille’s basketball offload helped Yoram Moefana over for the second try.

The home crowd was baying for action from the referee when Jaminet smashed into Sam Skinner in midair inside the France 22. The TMO intervened but only a Scotland penalty was called.

The Scots were held up on their first go at the line but could not be denied the second time, as Darge burst through the defensive line to score his first try for his country with 28 minutes gone.

Russell added the extras and the Scots were just two points behind despite such a dominant start from Les Bleus.

Scotland were now the ones causing all the problems but they butchered a stunning chance to take the lead before half time when a thrilling Van der Merwe break sent Chris Harris galloping clear.

With a huge overload on the left Harris’s pass fell too far in front of Hogg who spilled forward with the try line at his mercy.

The tournament favourites made Scotland pay for their error as Gael Fickou scythed diagonally across the field to dive across in the corner.

What could have been a five point Scotland lead at half time, was in fact a nine point deficit.

Within moments of the re-start France looked to put the game to bed when a turnover following confusion at a Scottish attacking breakdown saw Penaud race down the right wing. A chip over the top bounced favourably for Jonathan Danty to collect and score.

Scotland were playing fine with ball in hand but being picked off at will by the French at the breakdown, with referee Karl Dickson falling on the side of the visitors in most contests. It meant that Gregor Townsend’s side were unable to build any momentum.

The referee called a maul when he decided that Darge had been held up in the tackle and from the resulting strip, Damien Penaud was able to waltz over the line down the right wing, and take the score to 31-10 with 20 minutes remaining.

Scotland had no foothold as Les Bleus tried to turn on more style and they added a flourish to the scoreline when Penaud gathered a crossfield kick from Romaine Ntamack to score his second try.

There was time to give the home fans one last cheer before the end as Blair Kinghorn exploited a large defensive hole to gallop away and send Van der Merwe over to score.

After starting the championship with a famous Calcutta Cup win and fuelling hopes of finally mounting a charge for the title, Scotland must regroup before facing Italy in Rome in a fortnight in the knowledge that their Six Nations dream is in tatters once more.

Stuart Hogg 6 – Tried manfully to get Scotland back into the contest to no avail. Dropped chance will irk him.

Darcy Graham 5 – Not the same level of action as his past two games.

Chris Harris 7 – Made a sensational try-saving tackle in the first half before Fickou’s score. Pass inches away from sending Hogg away to score. Replaced at half time with a head injury.

Sione Tuipulotu 6 – Got through some carries but unable to properly puncture his opposition.

Duhan van der Merwe 8 – His searing break from inside Scotland’s half should have led to a go-ahead try in the first half.

Finn Russell 7 – Conducted a solid Scotland attack with ball in hand, tested the defensive line with his running and probed behind with the boot.

Ali Price 7 – Sucked in defenders to play in Darge for his try. Clever dart from the back of a scrum caught visitors off guard.

Magnus Bradbury 6 – Showed glimpses of his carrying but the theme of the day was the physicality of the French.

Rory Darge 9 – It has long been a feeling of when, not if, the openside made his impact for Scotland. The Glasgow Warrior was sublime on his first start, even in the face of a relentless storm from the visitors.

Nick Haining 5 – Unable to make an impact as the French enjoyed the spoils of battle up front.

Grant Gilchrist 6 – Had a lineout pinch but part of a pack that was comprehensively outplayed.

Sam Skinner 5 – Too often too slow to the breakdown, allowing French dominance on the floor.

Zander Fagerson 6 – Not a vintage day at the office for the powerful Glasgow Warrior with the scrum under constant pressure and the referee looking unfavourably on some of the Scots involvements around the field.

Stuart McInally 6 – Accurate darts but outplayed by his opposite number and unable to turn the tide.

Pierre Schoeman 6 – Stood firm against front row pressure but could not do it alone.

Replacements 5 – Scotland were in desperation mode by the final quarter but none of the replacements was able to make a major impact. Ben White and Mark Bennett coped well following HIAs. 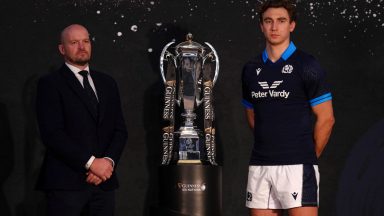