Rangers took the lead at Ibrox before being outclassed by the Premier League giants. 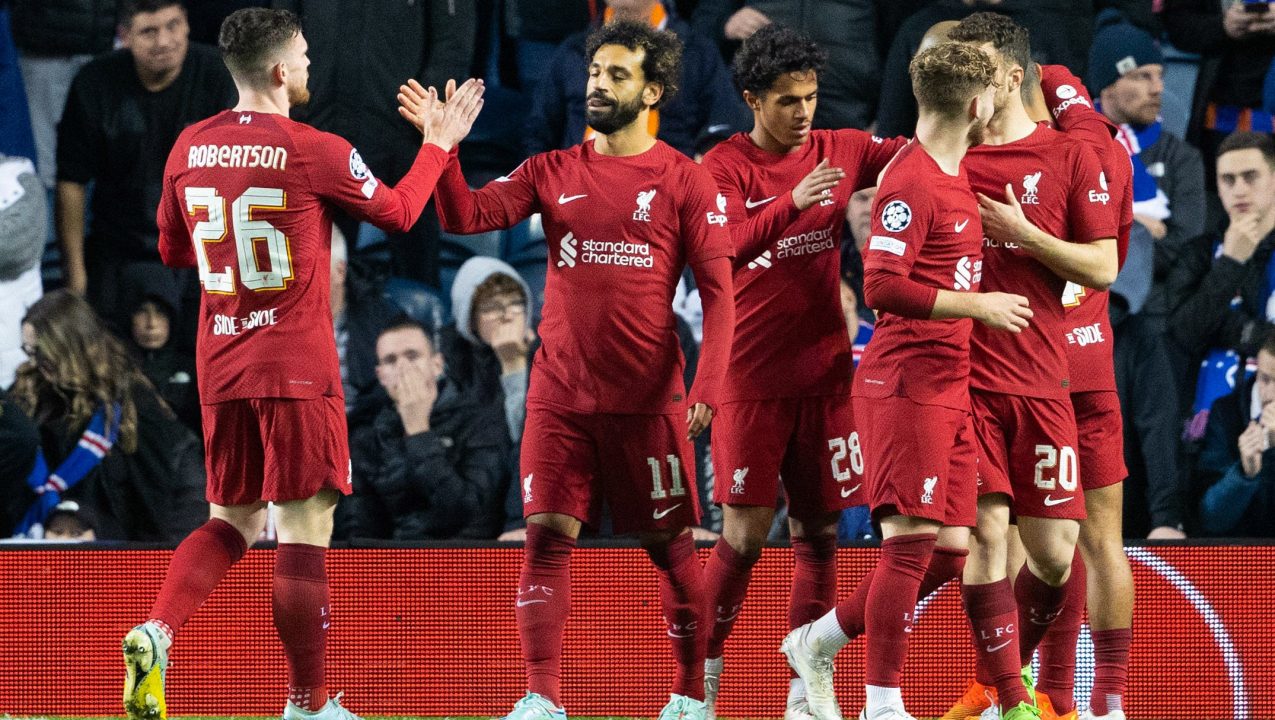 Rangers have been beaten 7-1 by Liverpool in their Champions League group game, suffering a record defeat at Ibrox and their worst loss in European competition.

Scott Arfield had given Rangers the lead but Roberto Firmino scored twice to put Jurgen Kopp’s side on top. Darwin Nunez added to the scoreline before Mohamed Salah came off the bench to score a hat-trick and Harvey Elliot scored just before full time.

The defeat was the Ibrox side’s fourth in four games and ends their chances of progressing in the competition.

Both sides were much changed from last week’s encounter, when Liverpool were 2-0 winners at Anfield. Van Bronckhorst made five changes, opting for a back four in defence and playing Fashion Sakala and Ryan Kent either side of Antonio Colak up front.

Jurgen Klopp went one better, bring in half a dozen players, with Nunez and Firmino playing together in attack and Mohamed Salah among those dropping to the bench.

Rangers knew the importance of a strong start in front of their own fans and Fashion Sakala made himself an opportunity to force a save from Allison early on. Ryan Kent tried his luck with a shot off target as the hosts showed their ambition.

The attacking intent paid off after 18 minutes when Rangers took the lead. Colak laid the ball off to Ryan Jack and the midfielder put a pass into the path of Arfield, who took a touch before firing low into the corner of the net.

Liverpool were only behind for six minutes. A corner was played in to the near post by Kistas Tsimikas and Firmino easily beat James Tavernier to flick a header high into the net.

Rangers suffered another blow just before half time when Connor Goldson pulled up with what appeared to be a thigh injury and the experienced defender was replaced by youngster Leon King.

The visitors went in front ten minutes into the second half and Firmino was again the man with the finishing touch. Joe Gomez made a surging run from right-back and put a perfect low ball into the middle that the Brazilian hit first time through McGregor’s legs.

With Liverpool well on top, they pressed on and added to their tally. Firmino raced on to a through ball and flicked it on to Nunez, who placed his shot into corner with composure.

Both sides made a raft of changes and Salah was among those introduced to the action. With fifteen minutes left he burst forward and shrugged off Barisic before poking a neat finish past McGregor from a narrow angle to make it 4-1.

The punishment continued when Salah got his second soon after. Rangers gave the ball away in their own half and when the Egyptian collected it, he stayed cool to pick out a finish while three players sought to challenge him.

Salah then completed a six-minute hat-trick, curling a left-foot finish past McGregor and inside the far pot, taking the score to 6-1.

Things went from bad to worse in the dying moments when Harvey Elliot volleyed in a seventh that was confirmed after a lengthy VAR check.