The Ibrox boss delivered a huge win at the end of a tough week. 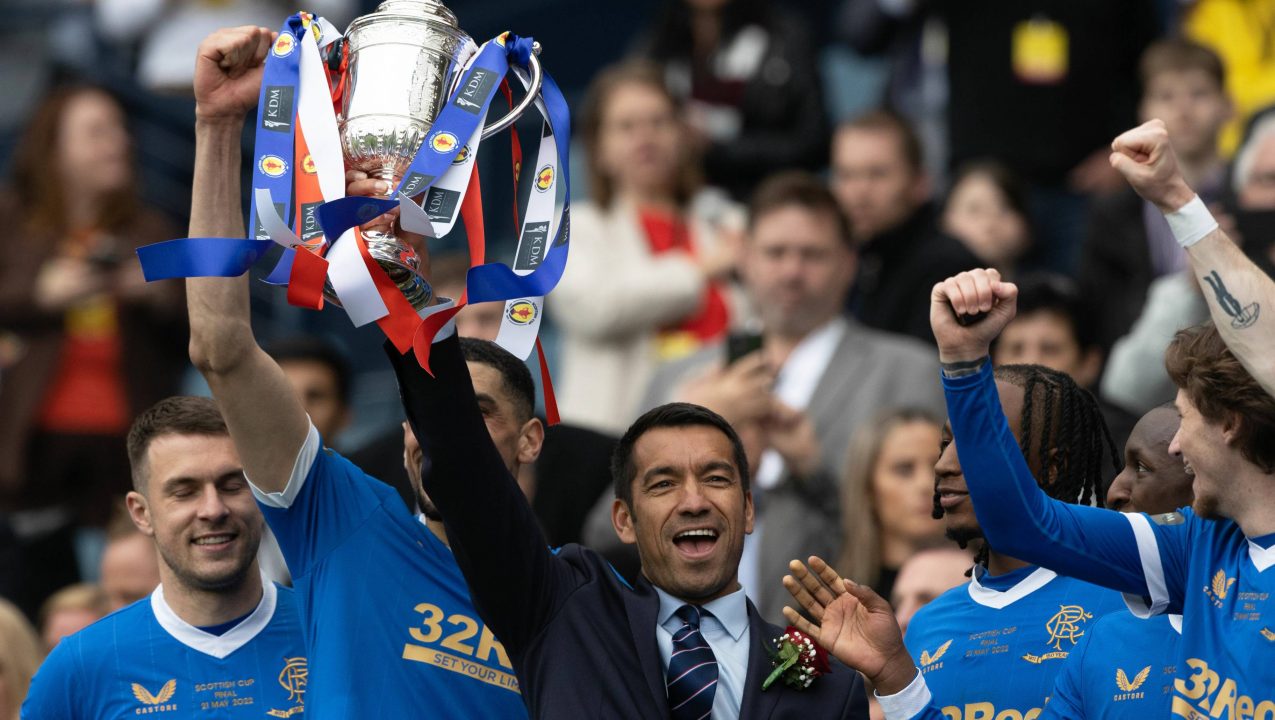 “Bouncebackability (noun): The capacity to recover quickly from a setback.”

It’s a ridiculous word that was popularised when manager Ian Dowie sought to describe the quality held by a team he took from relegation fears to the promotion play-offs over a six-month period.

Rangers’ Scottish Cup triumph, earned with two extra-time goals scored just three days after the pain and exhaustion of a penalty shoot-out Europa League final defeat in the heat of Seville, would suggest that Dowie had identified a rare feature and one that the Ibrox club has an abundance of.

Manager Giovanni van Bronckhorst was quick to applaud his side’s character after their 2-0 win on Saturday, pointing out that the squad had dealt not only with the crushing disappointment of defeat to Eintracht Frankfurt but had also attended the funeral of kitman Jimmy Bell the day before facing Hearts at Hampden.

Defeated Hearts boss Robbie Neilson was unable to find any real fault in his own team’s effort, shrugging off suggestion that Rangers should have tired and pointing out the opposition’s depth and quality. Both managers’ answers to what won the final had merit, the victors showing a will to win but also the ability to seize the day when opportunity presented itself.

Ryan Jack and Scott Wright had both started in Seville and so wouldn’t have been most people’s idea of fresh legs when introduced at Hampden. But Jack’s thumping drive from distance and Wright’s composed finish when played in showed that Van Bronckhorst has plenty to work with as he looks to add to his first trophy as Rangers boss.

The squad was deep enough to allow rotation and give options to bring change through substitutions. The team played as more than the sum of its parts. The fitness of the players was remarkable and the will to win was self-evident.

The Dutchman would, of course, have preferred to land his first silverware at Ibrox before now. Any season where Rangers start as champions and end as runners-up is never going to be regarded as a complete success, and the fact that the team’s run to the Europa League final was thrilling, impressive and against the odds doesn’t mean that the gut punch of losing on one kick of the ball after 15 games isn’t going to hurt for a while.

Regardless, a long and storied season ends on a high and eyes will turn to the challenges ahead. Van Bronckhorst inherited Steven Gerrard’s side after the Liverpudlian had carried out a rebuild over several seasons to put Rangers on a solid and competitive footing.

Now comes the groundwork for a season where there are no free hits.

After the summer break, Rangers will come back to the stiff challenge and instant pressure of Champions League qualifiers, where negotiating two rounds will land the team in among the prestige and riches of the group stage. Failure would see a drop to the Europa League and realisation that anything other than winning the trophy would feel like a step backwards.

Winning the league will be a priority and the domestic cups will be another measure of relative strength up against a formidable rival in Celtic and likely continued ambition from Hearts and others.

There will be change throughout the squad before any of these tasks are tackled. Aaron Ramsey and Amad Diallo will return to their parent clubs after failing to hit any heights in loan spells from on high.

Allan McGregor and Steven Davis both say they will have talks before making decisions but the pair, veterans of two successful spells at Ibrox, are likely to have played their last games. Connor Goldson, a defensive rock in recent years, has rejected all previous offers to stay.

Others are under contract and have made undeniable contributions but European runs and trophy successes tend to attract attention and it would be no surprise if this was the season a key player was to depart because an irresistible offer was to be received. Alfredo Morelos has lived through the constant noise of transfer talk but Calvin Bassey, Joe Aribo, Glen Kamara and Ryan Kent may all be in scouts’ notebooks and nearing the top of analysts’ spreadsheets.

There won’t just be exits, and the new arrivals will be expected to blend into a squad that has set standards and built expectations. Sporting director Ross Wilson and Van Bronckhorst will do well to find signings that slot seamlessly into the system and work ethic as well as raising the standard.

The lifting of the Scottish Cup drew a line under one season but also ended a demanding week on a positive note. The euphoria of the late, late win was celebrated by supporters who had barely had time to absorb the emotions of Seville.

Now they, the players and management will look ahead and hope that the energy and attitude that helped them bounce back from bruising defeat can be key to building on their Hampden success.