Peter Wright made the perfect start to his bid for the Cazoo Premier League title by winning the first round of the revamped competition.

After claiming his second World Championship last month, the Scot made it his 2022 quest to win this competition for the first time and hit the ground running in Cardiff.

A round-robin league has been replaced with 16 individual eight-man knockout events, and Wright beat defending champion and home favourite Jonny Clayton 6-1 in a one-sided final in the first week.

Wright, who earned £10,000 for the win, deserved his prize having seen off Michael Smith – in a rematch of the World Championship final – in the quarters and then Gary Anderson in the semis.

The 51-year-old raced into a 4-0 lead against Clayton and sealed glory in style with a 124 checkout.

Clayton, who had beaten Joe Cullen and James Wade on his way to the final, was unable to match Wright, who posted an impressive 113 average.

As well as his £10,000 pay day, Wright also wins five points which will go towards determining the top four players who will compete for the title on the 17th night of competition.

And he looks a good bet to be there on this evidence after claiming he is channelling his inner Phil Taylor.

“I have got a new feeling, a Phil Taylor feeling,” he said on Sky Sports. “I used to think ‘how does that man concentrate for every single match?’, but I have found it this year after I won the worlds.

While it was a positive night for Wright, world number one Gerwyn Price fell flat on his homecoming.

The Welshman, who missed last year’s tournament due to coronavirus, lost 6-3 to Wade in the quarter-finals and did not look his usual tenacious self. 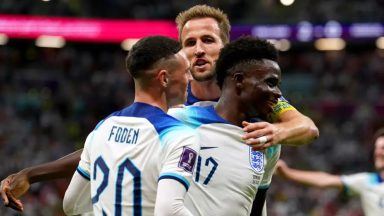