A 1-1 draw with Spain leaves the four-time winners in a precarious position. 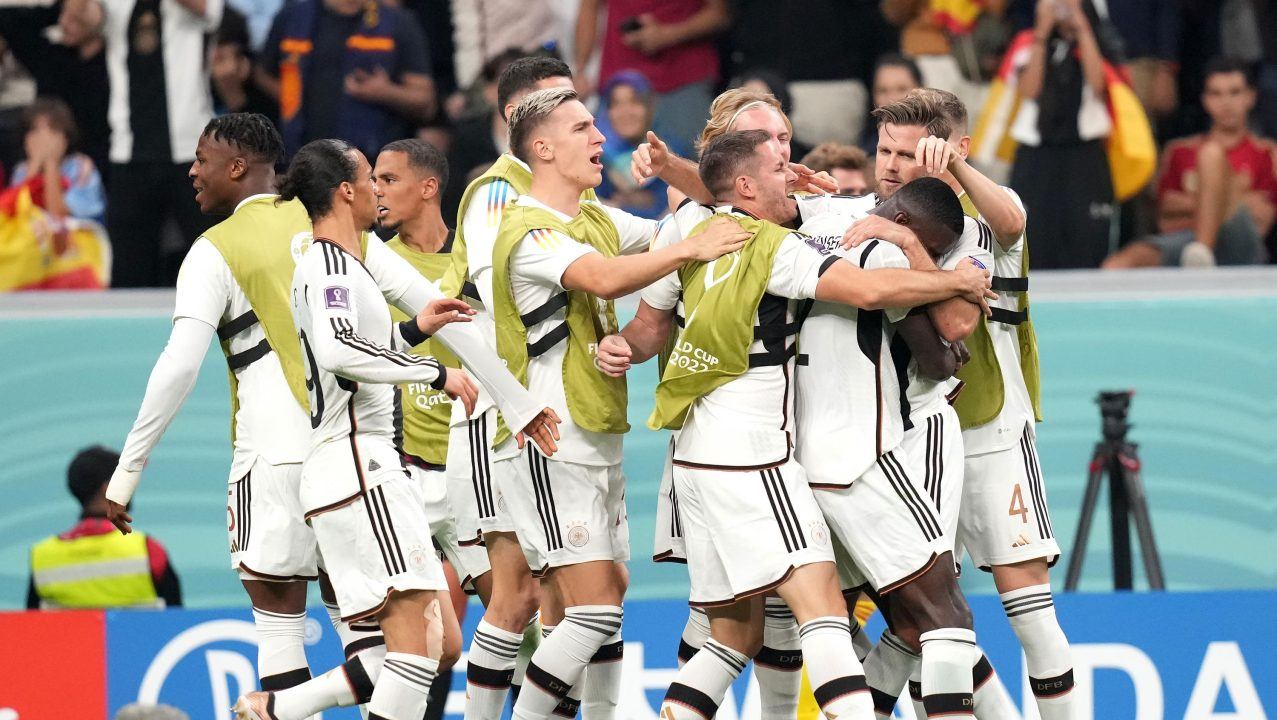 Niclas Fullkrug came off the bench to earn Germany a hard-fought draw against Spain and keep their World Cup hopes alive.

A surprise loss to Japan in their opening Group E game means Hansi Flick’s side do not have their destiny in their own hands but a 1-1 draw at Al Bayt Stadium – where Germany hit back after Alvaro Morata had opened the scoring – was a good response.

Only Costa Rica’s late win over Japan earlier in the day gave the Germans any chance of avoiding group-stage elimination for the second time in succession but they will have to beat the Central Americans and hope the result in the other game goes their way to stay in Qatar.

Remarkably, Germany have now won just one of their five games since lifting the World Cup in 2014, but the way they came from behind here will give them confidence.

There were very few standout performances on either side, Spain not at the free-flowing best which saw them thrash Costa Rica 7-0 in their first game and Germany struggling for a cutting edge.

Manuel Neuer’s fine stop prevented Dani Olmo opening the scoring for Spain with just over five minutes on the clock as he tipped a fierce strike onto the crossbar.

Serge Gnabry was then gifted Germany’s first chance when Spain goalkeeper Unai Simon played the ball out straight into the path of the Bayern Munich forward but he could not find the target.

Antonio Rudiger thought he had headed Germany in front in the closing stages of the first half but VAR intervened to rule him offside after he had got on the end of a free-kick.

Enrique turned to Morata just eight minutes after the restart, Torres making way having been unable to replicate the performance which saw him hit a hat-trick in a 6-0 Nations League thumping of Germany the last time the sides met.

Simon’s distribution again caused problems as his ball out to Pedri was intercepted, but the Athletic Bilbao stopper made amends by pushing behind Joshua Kimmich’s strike.

But it would be substitute Morata who broke the deadlock with a deft finish from Alba’s low centre, just eight minutes after his arrival into the game.

Spain should have doubled their lead shortly afterwards but a rush of blood saw Marco Asensio blaze wildly over Neuer’s goal.

Germany looked to hit back and Jamal Musiala should have done better when slipped through on goal by substitute Leroy Sane, but he could only fire straight at Simon.

The equaliser would come with just seven minutes remaining and courtesy of another substitute – this time in the shape of Werder Bremen forward Fullkrug.

Musiala managed to bundle a pass through to the 29-year-old, who grabbed his second goal in four senior caps to earn Germany a share of the spoils.