Denzel Dumfries scored the third goal in a 3-1 victory. 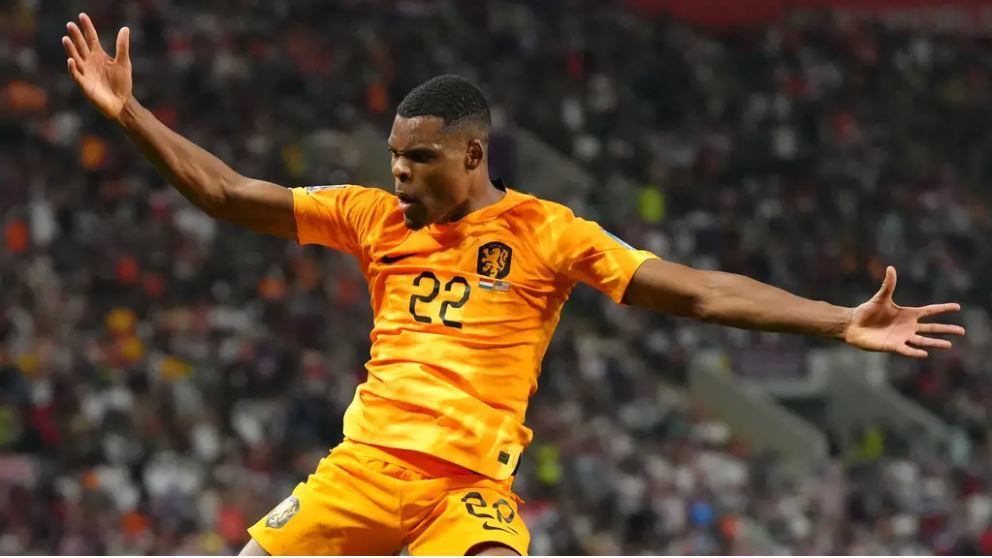 Netherlands became the first team through to the World Cup quarter-finals with an entertaining 3-1 victory over the USA.

Memphis Depay finished off a superb move to open the scoring in the 10th minute and Daley Blind made it two at Khalifa International Stadium just before half-time.

The US threatened a comeback when Haji Wright pulled one back in the 76th minute but Denzel Dumfries ensured it was the Dutch that progressed to the last eight with their third five minutes later.

Louis Van Gaal named an unchanged side from the one that beat Qatar in their final group match while Walker Zimmerman and Jesus Ferreira came in for the US.

Gregg Berhalter’s team made an excellent start and had a golden chance to take the lead in the third minute when Tyler Adams flicked the ball over the top for Christian Pulisic but Andries Noppert pulled off an excellent save.

All the attacking intent was coming from the US but Netherlands scored from their first real foray forward.

One of the best moves of the tournament saw the Dutch pass their way through their opponents in clinical fashion before Dumfries perfectly cut the ball back from wide on the right for the onrushing Depay, who swept it into the bottom corner.

The Dutch have been criticised at home for playing dull football and for the next half an hour, barring one shot fired well over the bar by Blind, they were content simply to keep their opponents at arm’s length.

The US finally tested Noppert again in the 43rd minute with a crisply struck shot from Timothy Weah from 22 yards but heading into stoppage time Netherlands doubled their advantage.

In a near copy of the first goal, Dumfries again played the ball in low from the right and this time it was Blind who stroked his shot into the net before celebrating with his father Danny, who is on Netherlands’ coaching staff.

Both managers made changes at the break, with Steven Bergwijn and Teun Koopmeiners coming on for the Dutch and Giovanni Reyna for the US.

Berhalter’s side needed a quick response and they almost got it as Tim Ream threatened from a corner but the defender could not get enough on the ball and Cody Gakpo cleared from in front of the line.

At the other end Matt Turner had to be alert to prevent Zimmerman scoring an own goal after he got a toe to another cross from Dumfries before pushing Depay’s dipping effort over the bar.

The US were living dangerously as they pushed for a way back into the game, and Turner pulled off a fine double save in the 71st minute, parrying Koopmeiners’ shot and then getting up to keep out Depay’s headed follow-up.

That looked even more important five minutes later when the US did get their goal.

Wright had come close moments earlier when he seized on a poor pass from Bergwijn and went round Noppert but his touch pushed him too wide and Dumfries was able to clear.

Pulisic was the architect of the goal with a ball in from the right that Wright somehow flicked with his heel over Noppert and into the far corner.

The keeper then came flying out to clear as Wright looked to break through again but US hopes ended nine minutes from time as the Dutch broke away and Dumfries grabbed the goal his performance deserved.