Tommy Wright's side set up a cup clash with St Mirren.

Kilmarnock booked their place in the quarter-finals of the Scottish Cup following a 3-1 win over Montrose at Rugby Park.

First-half goals from Kyle Lafferty and Chris Burke put Tommy Wright’s charges in a comfortable position and Greg Kiltie added to their lead after the interval.

Montrose carried a threat throughout the game and got a goal which their play deserved when Cammy Ballantyne scored with just eight minutes remaining.

But this was a comfortable win for Kilmarnock as they set up a last-eight tie with St Mirren.

League Two outfit Montrose were playing their ninth game in just four weeks after football in the lower leagues in Scotland resumed in March.

And they had just 39 hours to prepare for this fourth-round tie since their 5-0 defeat to Partick Thistle on Thursday evening.

It was always going to be a tall order for Montrose, given the amount of games they have had in such a short period of time, and their task of a cup upset was made even harder when Kilmarnock broke the deadlock after seven minutes.

Kiltie burst into the penalty area and went round Montrose goalkeeper Allan Fleming, who had raced off his line, and then dinked in a cross where Lafferty was on hand to volley the ball home.

Kilmarnock went close to doubling their advantage when Burke fired in a powerful shot which Fleming pushed into the air and then just about managed to turn behind for a corner.

The Rugby Park outfit did notch a second after 25 minutes when they worked a short corner and Burke jinked onto his left foot and whipped in a cross which glanced off Montrose defender Andrew Steeves on its way into the far corner.

Although the ball struck Steeves, it would be harsh to deny Burke the goal as his effort was on target.

Montrose should have cut the deficit before the interval when Lewis Milne cut back for Russell McLean but the striker fired wide from close range.

In the second half Milne robbed Zech Medley of possession and raced through on goal but was denied by Kilmarnock goalkeeper Colin Doyle.

Kilmarnock claimed their third after 61 minutes when Kiltie capitalised on a mistake by Fleming.

Sean Dillon played the ball back to the goalkeeper, who took too long in possession and when his clearance was blocked by Lafferty the ball broke to Kiltie and he stroked into the unguarded net.

Montrose got a goal with eight minutes remaining as McLean teed up Ballantyne and the full-back finished from close range. 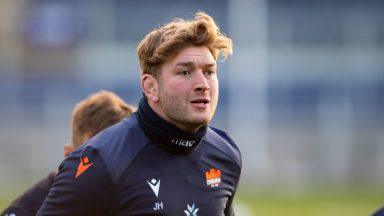