Kevin Thomson believes Rangers can match the team of 2008

The former Ibrox midfielder says Giovanni van Bronckhorst has got it right in Europe so far. 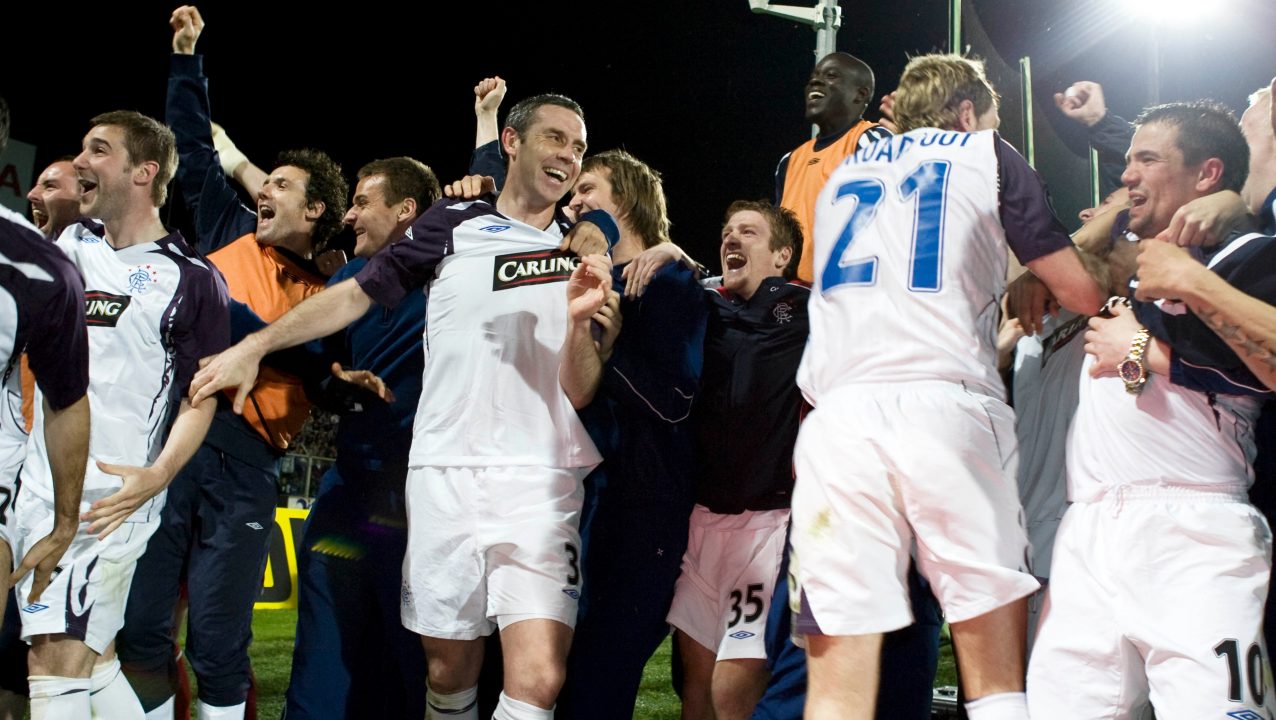 Former Rangers midfielder Kevin Thomson believes the Ibrox side can be inspired by team that reached the UEFA Cup final in 2008 when they face RB Leipzig.

Manager Giovanni van Bronckhorst and his players are in Germany for the first leg of their Europa League semi-final against the Bundesliga side and are aiming for a positive result on Thursday night before the return leg at Ibrox next week.

Victory over two legs would see Rangers emulate the side that reached the 2008 final against Zenit St Petersburg under Walter Smith, with Thomson playing his part in a dramatic second leg in Italy when Rangers beat Fiorentina in a penalty shoot-out.

The former midfielder is now manager of Kelty Hearts, but has had a keen eye on his old team as they have progressed past Borussia Dortmund, Red Star Belgrade and Braga. He thinks belief is key to success on Thursday.

“Obviously, this is a massive game for the club,” he told STV Sport. “I think there’s the excitement about how well they’ve done and I think they need to believe they can go there and get a result.

“The second leg is going to be massive. I think if they can stay in the game, stay in the tie, it’s a two-legged tie, so I don’t think you can be naïve to think that you need to win it in the one game.

“I think if we can get a positive result, then I’m pretty sure back at Ibrox, it could be massive for the club.”

Van Bronkhorst’s job has been made more tricky with the loss of talismanic striker Alfredo Morelos to injury, then his replacement Kemar Roofe. Thomson believes Fashion Sakala can pose danger, but thinks the manager may opt to take a conservative approach to the away game.

“It’s an intriguing one,” he said. “I have to say the manager Gio has got it right so far in Europe.

“I think back to the Dortmund game when he changed to 3-5-2, it came up trumps, and they’ve been electric on the front foot. I think teams have really found Ibrox a difficult place to go. Sakala could offer a threat with his speed, which I think Gio will look at.

“There’s been rumours of maybe Joe Aribo playing like a false nine. So it will be intriguing. I think he’ll look to Scott Arfield for his experience. I think he’ll play that extra man in midfield, it might be a wee bit safer than a wee bit more attacking.

“We’ve seen Scott Wright obviously coming in and being on the front foot and giving the manager food for thought.”

The tie brings back memories for Thomson of the team he was part of 14 years ago, upsetting the odds to enjoy a European run right to the final.

“It was a whirlwind to be honest,” he said. “I don’t think anyone could have thought that we would have got there, starting all the way back in the Champions League.

“The group of death really. Lyon, Stuttgart and Barcelona, I think people wrote us off to maybe not even get a point never mind get seven after the first three.

“We gave ourselves a good opportunity to qualify in the Champions League, to then get knocked out and get all the way to a UEFA Cup final was what dreams are made of.

“The fondest one I suppose when you look back, wee Nacho scoring that winning penalty, to get Daniel Cousin sent off, to play with ten men, to play the team we played against to get there was amazing really and I suppose really that’s why we do this job.”

Thomson was suspended for the first-leg and watched the game from the sidelines, with Rangers looking to get a result that would keep them in with a fighting chance in the return match. He sees parallels with Thursday’s game.

“Well I suppose that’s pretty much the same as the boys are going into on Thursday,” he said. “You hope that the tie’s not dead. You hope that you give yourselves an opportunity.

“I think that Rangers team that I played in was the catalyst for staying in games. The manager was the best of the best really, he gave us belief that we could compete with anyone.

“When we went over to Florence, you would never in your wildest dreams imagine the wee man stepping up and scoring that penalty and hearing the commentary in the aftermath of the game.

“But I think if the boys need any inspiration and any motivation, they only need to look at that team and think that if we could do it, this team certainly could as well.”