The former Netherlands captain lasted less than a year at Ibrox despite Europa League final and Scottish Cup win. 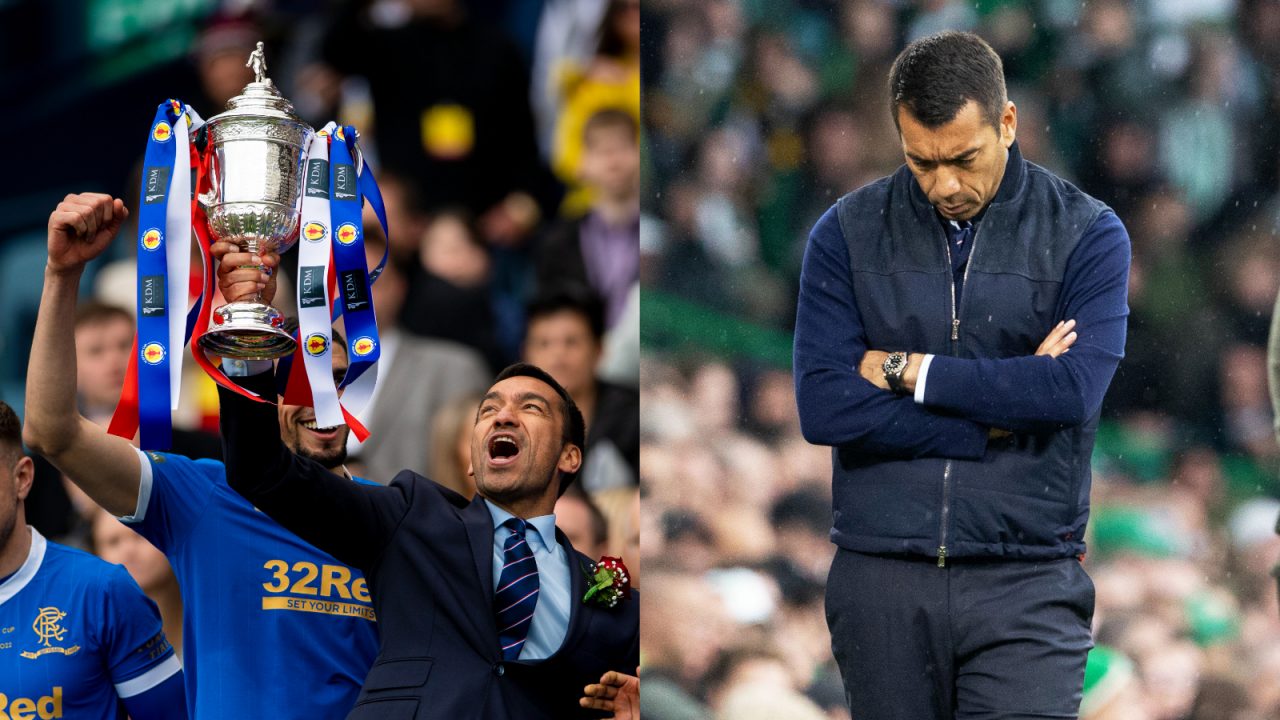 Giovanni van Bronckhorst has left Rangers after a year-long rollercoaster ride that saw the club reach unforgettable highs before plummeting to new lows in the shape of record defeats and Champions League performances.

When thousands of supporters made their way to Seville for the Europa League Final in May, few would have thought they would be looking for a new manager just a few months later.

Van Bronckhorst took charge of the Ibrox club at end of 2021 after Steven Gerrard left for Aston Villa and the Dutchman masterminded the unforgettable run that ended in a penalty shootout defeat to Eintracht Frankfurt.

Frankfurt’s goalkeeper Kevin Trapp kept them from a first European trophy in 50 years, first with a late save from Ryan Kent when it looked like a certain goal, then stopping the vital penalty from Aaron Ramsey to secure the trophy for the German side.

The Scottish Cup was won a few days later and, despite losing their league title to rivals Celtic, it started to look as if Rangers had pulled off a masterstroke with the appointment of their former player.

Despite a second-placed Premiership finish, they had reached their first European final since 2008 and won their first Scottish Cup since 2009.

But as the dust from last season settled and this one got underway the shine from the trophy started to fade.

More European success was to follow in the very early stages of the 2022/23 with a run of qualifiers culminating in an impressive play-off win over PSV Eindhoven to reach the group stages of the continent’s top tournament for the first time since 2010.

But the early joy was short lived as a step up in class to the Champions League seemed a bridge to far for the club and heavy defeats took their toll on confidence within the group as the season quickly soured.

Six defeats from six games with 22 goals conceded and only two scored left Rangers with the unwanted tag of worst Champions League team since the tournament began.

The European struggles were paired with a run of domestic results that saw Rangers fall well behind Celtic in the title race. The Ibrox side drew at home to Livingston, lost at St Johnstone and then drew at St Mirren in the final game before the World Cup break.

We take a look at six results that led to the end of the former Netherlands captain’s reign at Ibrox.

Some fans might have had their doubts over Van Bronckhorst’s appointment after his first heavy defeat to Celtic just months after taking the hot seat.

In the three seasons previous under Gerrard, Rangers never lost an Old Firm game by more than two goals and had gone a year unbeaten against their Glasgow rivals until February 2022 in what was the Dutchman’s first derby since his return to Ibrox.

They were soundly beaten 3-0 thanks to the three first-half goals at Celtic Park as the Hoops took top spot and never looked back.

The new season was only weeks old when the Europa League finalists were brought crashing back down to earth with a crushing loss at Celtic Park that sparked a nightmare run of heavy defeats.

Jota, Turnbull and a Liel Abada brace sealed a 4-0 win for Postecoglou’s men, who moved five points clear at the top of the league.

Rangers made their long-awaited return to the big stage in Amsterdam in matchday one of this season’s Champions League.

But the return didn’t go as many fans would have imagined as Ajax eased to a 4-0 victory in what the second loss of that scoreline in the space of four days.

Hopes were raised inside Ibrox when Scott Arfield scored the opening goal when they hosted the Merseyside giants in Glasgow.

But Liverpool came back into the game and went on to rip Rangers to shreds, thanks in large part to a second-half cameo from Mo Salah, who scored a hat-trick after coming off the bench.

The defat was the club’s biggest since the 1957 League Cup final to Celtic and their worst ever defeat in front of their home fans.

An early Joel Nouble looked like it earned Livingston an unlikely win in Glasgow before a last-minute strike from John Lundstram saved Rangers from a humiliating defeat.

Despite rescuing a point, the team were booed off the park by an angry support and it seemed writing was on the wall for Van Bronckhorst.

Rangers ended a miserable Champions League campaign with a home defeat to the Dutch champions, leaving them with an unwanted group-stage record.

The defeat leaves them with no points and a goal-difference of minus 20, the worst of any side at the group stages of the competition, and the first British club to lose all six group games.

St Johnstone piled on the pressure with a win in Perth that left them trailing league leaders Celtic by seven points.

Rangers dominated the first half with 75% possession, 12 corners and 17 shots at goal to St Johnstone’s one, but it was Callum Davidson’s men who went into the break 1-0 up after a fantastic strike from James Brown.

Nicky Clark scored the second before Tavernier pulled one back but Rangers couldn’t avoid the defeat that spelled the beginning of the end.

Following the St Johnstone defeat, Van Bronckhorst and his side knew that they had to win their remaining two league games before the break if they were to relieve the pressure.

A 1-0 midweek win over Hearts at Ibrox looked to have put things back on track, but the team then headed to Paisley for their last game before attention turned to Qatar 2022.

St Mirren had already won 2-0 against Celtic at home this season and posed plenty of problems for Rangers, exposing weaknesses in an injury-hit team.

A long-throw in led to the ball falling at the feet of Jonah Ayunga and he slammed in a powerful shot that put the hosts ahead.

Rangers toiled but netted a late penalty after Ryan Strain caught Ryan Kent as the winger worked his way into the box.

Celtic’s win later that day put the Parkhead side nine points ahead in the Premiership table and many expected a quick announcement on Van Bronckhorst’s future.

Instead, the Dutchman returned home as the players went on break and November 18 signalled a year in the job for Van Bronckhorst. The board met days later and decided that he wouldn’t return to Ibrox as manager.