Speedway captain to return after breaking back in high speed crash

Ulrich Ostergaard smashed into a barrier on the opening bend of the final heat in a Scottish derby race last year. 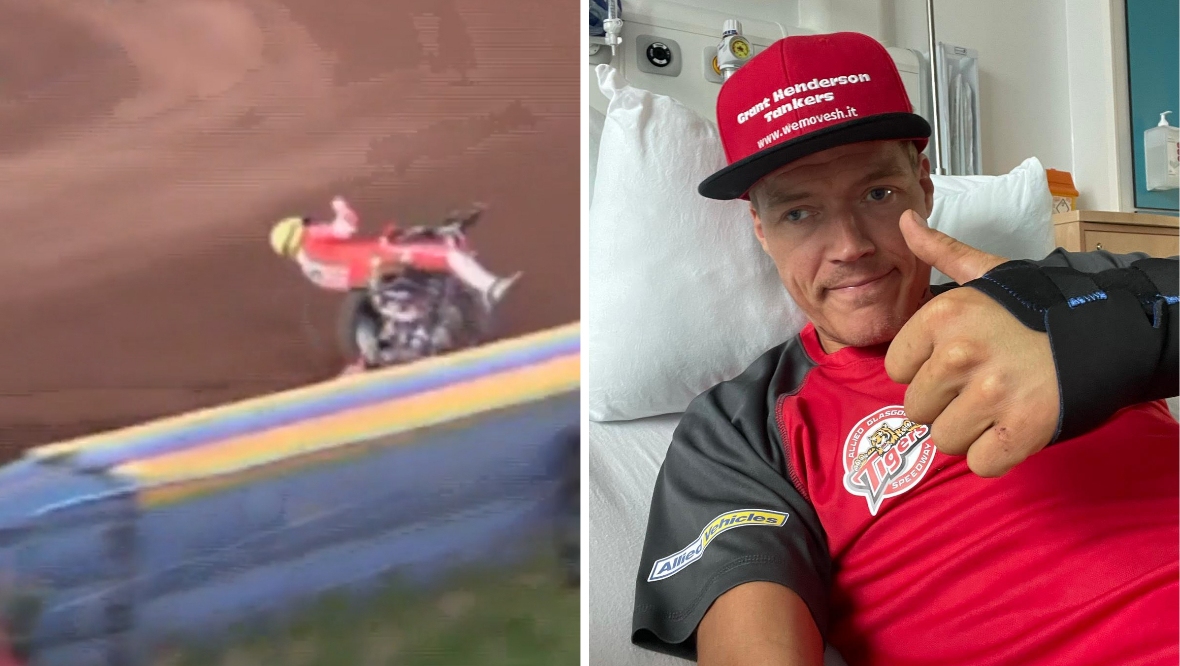 The captain of the Glasgow Tigers speedway team says he never considered quitting the sport, as he recovers from a high speed crash which left him with a broken back.

The race, in July last year, was abandoned after Ulrich Ostergaard smashed into a barrier.

“It’s pretty weird,” the rider told STV News, “I remember waking up on the Saturday morning at the hospital. It was a big knock to the head as well and obviously breaking three bones in my back didn’t really help either.

“I was probably in a bit of a poor state at that point.”

The Dane hit the track barrier at high speed on the opening bend of the final heat in a Scottish derby race at Armadale on July 23, 2021.

Following extensive treatment at the track he was taken to hospital in Edinburgh.

“I felt quite good when I woke up, I was still positive and wanting to get back back on my bike as soon as I could,” Ostergaard said.

“Obviously because I couldn’t remember how bad it was, it probably made everything a bit better. But it was a big crash and obviously I wanted to heal properly as well.”

Ostergaard is returning to the track this year having been named captain for the coming season. Now at the age of 40, he says walking away from the sport was never an option despite last year’s crash.

“When you enjoy your speedway, and you’ve got good teammates and everything is going good, it’s the best thing in the world,” he said.

“There’s not really been any doubt about whether I wanted to be back or not. I was just really positive to be back on a bike and start the new season and want to try keep going where I left off.

“It’s always going to be harder the older you get but I’ve got a big motivation for trying to beat some of the young ones.

“I’ve still got a lot of things I want to do and, being a captain for Glasgow, trying to get a trophy back up there would be a really good thing for me at my age anyway.”

The club has received lots of investment since 2015, with their Ashfield Stadium home getting a further upgrade this year.

The Tigers get their season under way hosting Newcastle Diamonds on Friday, and are hoping this is the year they get their hands on the British Championship for the first time.

Ostergaard said: “I think the fans and management really deserve it with all the effort they’ve put in. It’s definitely the main aim and that’s what we’re all going for.

“Anything can happen over the course of a long season, but we’re positive and we have a strong team with plenty of youth and experience.

“It gives us all a big boost to be back on the track. We’re just going to urge fans to turn up there, be behind us, make some noise because that’s what it’s all about, and hopefully the Tigers are going to have a great season.”