The Rangers manager says he is 100% behind Glen Kamara and UEFA will deal with the incident. 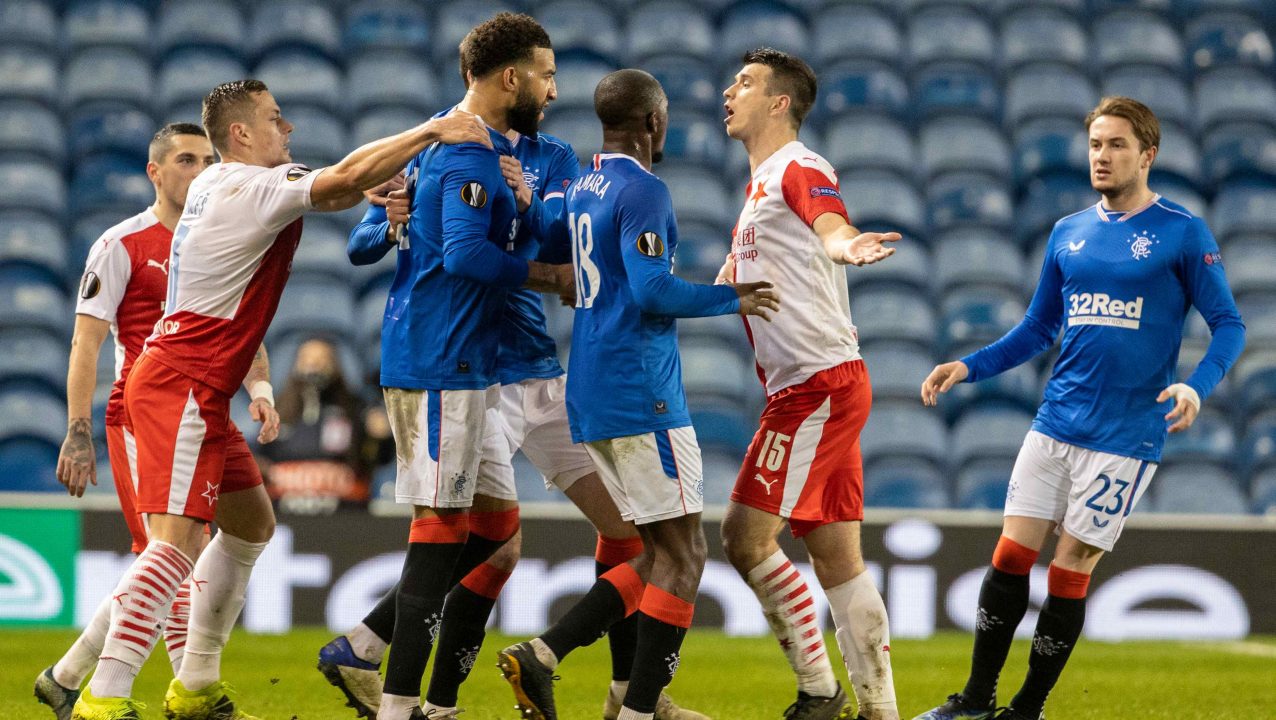 Rangers boss Steven Gerrard says he is ‘100%’ behind Glen Kamara after the player said he was racially abused by Slavia Prague’s Ondre Kudela.

The Europa League tie between the sides boiled over in the second half when Kudela said something to Kamara while covering his mouth. The Rangers midfielder reacted with shock and anger and his teammates also leapt to his defense.

Kudela was substituted shortly afterwards but Steven Gerrard held discussions with his opposite number Jindřich Trpišovský after the final whistle and again at length after the players had returned to their dressing rooms.

Gerrard revealed his anger at the incident and said that he hoped “with all his heart” that UEFA would deal with the situation effectively.

Slavia Prague, however, denied the racism claim and insisted their player was assaulted.

Speaking to the media after the game, Gerrard said: “Sometimes in your career there are things that happen that are more important than the game, that are above football.

“First, I’ll deal with the football side. We were beaten by the better team over the two legs so congratulations to Slavia. They deserved it and in no way do I want to sit here and be a bad loser and come out with any excuses. I’m really proud of my player for the efforts and the journey they took us on.

“In terms of the other incident, I have to be careful what I say but you build relationships in football and I have built a very, very strong relationship with Glen Kamara.

“Glen Kamara to me is one of my own. I 100% believe what he is saying in terms of the accusation. Other players around him heard it.

“I will stand with Glen Kamara and deal with it however he wants to deal with it. I’m proud of all of my players tonight. They showed solidarity and from the top of this club to the bottom we stand with the players.

“It’s over to UEFA now, this situation, and I just hope it doesn’t get brushed under the carpet.”

Gerrard went on to reveal his anger at the incident and referred to a wave of racist abuse that appeared on social media in the aftermath of the game.

“I feel angry right now,” he said. “It’s difficult to describe how I feel because I know Glen, I trust him 100%. It’s extremely disappointing and there’s too much of it happening around football.

“Something needs to happen quickly, that is above me. But 100% I stand with Glen.”

The Rangers boss revealed that he would have supported Kamara if he had wanted to leave the pitch and he stressed that something had to be done to stamp out similar incidents.

He said: “There was a lot of commotion around that we tried to defuse and this will be taken on by UEFA. I’m sure they will speak to both players and we will let other people deal with it.

“All I can confirm is that my player tells me that he was racially abused.

“I tried to call Glen over during the game but he didn’t want to. I was going to ask him if he wanted to leave the pitch and i would have backed him whatever his decision was.

“The players stayed on the pitch and it was played to a conclusion. It’ll be taken out of my hands now and be dealt with by UEFA.

“I just hope, with all my heart, that people deal with it because that situation is not normal.

“If I wanted to say something to you on a football pitch, why do I need to cover my mouth with my hands?

He also revealed that Kamara was seriously shaken by the incident.

“Devastated would be an understatement,” he said. “This is a cool, calm kid and it’s not him to accuse someone of anything. It’s not him.”

A Slavia statement issued several hours after the final whistle read: “The club denies the allegations of racism of one of the team captains Ondřej Kúdela.

“Slavia resolutely denies the disgusting accusation of one of the team captains Ondřej Kúdela of racist behaviour. Already the founders of our club gave us crest where white colour means ‘the purity of the idea of sports and fair contest where the rival is not our enemy, but respected opponent’.

“Today, Slavia is an international club based on the respect for the opponent and mutual respect of all people and cultures.

“After one of the brutal fouls, Ondřej Kúdela spoke to one of the Rangers players. ‘I told him ‘You f*****g guy’. It was said in emotions, but I absolutely deny there was anything racist in those words,’ Kúdela stated.”