The Rangers boss said his side would be ready for anyone in the Europa League last 16. 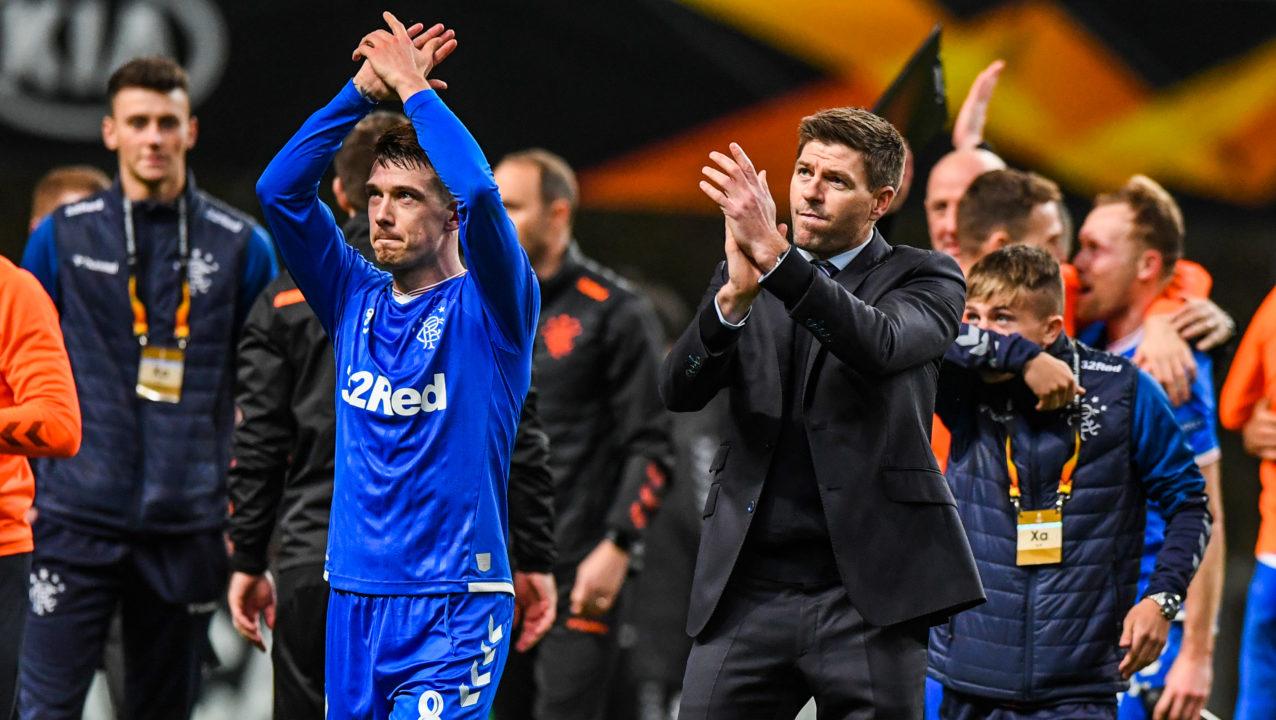 Steven Gerrard applauded his Rangers players for their achievement in reaching the last 16 of the Europa League and singled out goalscorer Ryan Kent for his contribution.

Kent’s goal in Portugal gave Rangers a 1-0 win on the night against Braga and a 4-2 aggregate victory against the highly-fancied side and Gerrard said everyone played their part.

“I’m very happy,” he said. “The players have put in maximum effort to get the job done tonight.

“We’ve played against a high-class opposition, a very dangerous opponent who are in probably the best form they have been in for some time.

“They’ve got a bright young coach and to top a group in the Europa League and be the highest scorers shows they know what they’re doing.”

The Rangers boss said he believed Kent’s goal, where the former Liverpool player raced clear before steering a low shot past Matheus and into the bottom corner of the net, could be a confidence booster. Kent, who cost Rangers £7m last summer, has come in for criticism for a lack of goals and assists as Rangers have dropped points in the Premiership this year.

“Ryan is a player that we need that level of contribution from,” he said. “There have been a lot of opinions on Ryan of late on what type of form he is in but he delivered a big moment for us and he could have had two.

“He was disappointed with the big chance he had in the first half. But I am really happy with him and I don’t just judge him on numbers. I judge him on what he is doing for the team – in and out of possession.

“People don’t give him the credit he deserves in terms of the amount of running he does for us – but he came big for the team and scored the important goal.

“Hopefully this will do his confidence the world of good because there will be times when people aren’t happy with him and it’s a little bit up and down. That is part of being a footballer at a top club.

“But some of the opinions I have been reading of late on Ryan are ludicrous. He’s a top player.”

Rangers now look to Friday’s Europa League draw where they will learn the identity of their last 16 opponents. Gerrard wouldn’t be drawn on the possibility of facing city rivals Celtic, should they progress, but said his side would savour the moment before turning thoughts to the Scottish Cup.

“I think tonight is about enjoying the win,” he said. “We’ll really look forward to the draw on Friday and we’ll be proud whoever we come up against, ready for the next challenge.

“For me, the more important thing is that we need to back up this performance and go to Hearts and qualify in another competition.

“That’s the priority for us right now.”