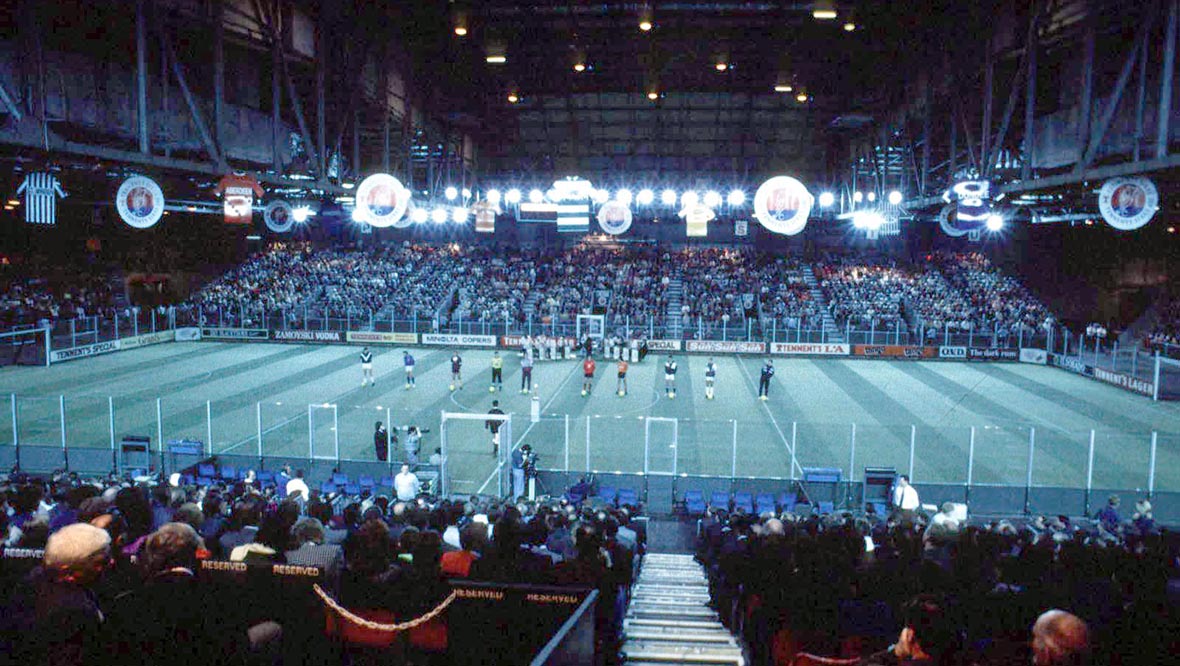 The SECC was packed to the rafters with screaming fans on this day 30 years ago.

But not for Whitney Houston, Nirvana or Tina Turner. Instead, they were there to watch the top Scottish footballers of the day take part in a competitive six-a-side tournament.

The Tennent’s Sixes was organised by the Scottish Football Association. The concept was unique – for both spectators and players – who were more accustomed to the traditional 11-a-side game on full-sized pitches.

The inaugural tournament in 1984 was contested at Coasters Arena in Falkirk, before being moved to Ingliston Showground near Edinburgh.

From 1986, however, it found a permanent home at the Scottish Exhibition and Conference Centre (SECC) in Glasgow, with fans of clubs in the top flight of Scottish football creating a raucous atmosphere on the banks of the River Clyde.

Meanwhile, more supporters watched from home as the entire two-day competition was broadcast live on STV.

This wasn’t a Masters-style exhibition with retired players coming back for one last kickabout. The players were in their prime and wanted to win.

Clubs such as Rangers, Celtic, Aberdeen and Hearts each selected six of their stars to represent them, with the likes of Davie Cooper, John Robertson, Jim Leighton and John Collins among those to have graced the event.

The last-ever Tennent’s Sixes took place over the weekend of January 24/25 in 1993 and was won in thrilling fashion by Partick Thistle, who defeated Airdrie 4-3 in the final.

“Our fans really bought into it, they gave us great backing and we managed to go all the way in the tournament,” recalls Gerry Britton, who was part of the winning Thistle team and is now the CEO at Firhill.

“It was a really entertaining experience – not just for the supporters who seemed to really take to the tournament, but the players as well.

“The games were tight, fast and furious, loads of goalscoring opportunities. The fans were right on top of you and it was a great atmosphere.

“It was something totally different – indoors obviously, especially in January that was nice – but I think the difference was when you play in the small-sided games it’s like watching basketball or ice hockey.

“There’s loads of excitement around the box, which is great for supporters, but also great for the players as it was more like playing a game of five-a-side with your pals than anything professional.”

As the last-ever winners, Thistle have custody of the Tennent’s Sixes trophy, which sits pride of place in the trophy room of the club’s ground in Maryhill.

An upcoming dinner commemorating 30 years since the triumph will be attended by the playing class of 1993.

What was the format?

Goalkeepers could only hold on to the ball for six seconds and, from 1991, teams were required to leave at least two players in the opposition half – a move designed to increase the number of goals.

Two yellow lines separated the field into thirds. Players could only shoot in the attacking third and the ball had to be passed through each zone before a goal could be scored.

Andy Murdoch, Thistle’s goalkeeper for the successful 1993 tournament, remembers that Partick were only allowed to enter because Rangers withdrew at the last minute.

“We saw it as a bit of a laugh, nobody really knew what it was all about,” he said. “I had played in it a few seasons before with Celtic and we got battered, so I remembered the experience.

“It was nothing like anything you’ll ever experience. It was loud, the astroturf was sticky, they were up close and personal and the goals were small.

“When players like Davie Cooper were hitting the ball at normal speeds, it was hitting you or going by you and I had a few staved and broken fingers.

“Thistle fans were there in their numbers. We were in the second session of the first day and they were there, vocal, behind the goal and it was fantastic for us, and as a team we grew and got better and better.

“My wife was there with a busload of schoolkids so I had something to play for and you just got into the fixture – some really, really great memories.”

Murdoch retired from football at the age of 27 following a career in the game that saw him serve as Pat Bonner’s understudy at Celtic. He joined the police and retired at the rank of superintendent last July.

Despite his playing days being behind him, Murdoch says Partick’s success at the Tennent’s Sixes is often brought up – primarily as the club remain the holders of the trophy.

“It is quite bizarre to think 30 years have passed – we are still the holders and I would love to see it come back,” he said.

“I think the young fans won’t remember any of this, but I’m sure they would love to see their favourites play against the best in Scotland in a tournament where you have a chance of winning.

“It was surreal to think we won it when you see the teams taking part and the calibre of player that was there.”

Davie Irons, another member of Thistle’s winning side, also has fond memories of the tournament.

He said: “Partick Thistle offered the players a holiday if we managed to win it. I think that was the most pleasing aspect, that we got a holiday at the end of the season.

“I’ve still got – believe it or not – quite vivid memories of the competition.

“It was something as a player that you looked forward to. Thistle has just been promoted into the Premier League, so we were invited to take part – the two nights were really entertaining.

“It was strange, but the players really looked forward to it. It was a wee change from the hustle and bustle of your Saturday fixtures and a wee bit different playing indoors, on astroturf.

“It was a family atmosphere and all the teams had their little pockets of supporters. Winning the Tennent’s Sixes was just as big a thrill as winning promotion.”

Who played in the Tennent’s Sixes?

The Tennent’s Sixes tournament was played ten times and won by seven different clubs – no side was dominant in winning the event.

Here are the finals that took place from 1984 to 1994 and see how many players you recognise in the photos below, which show some of the teams to have laid their hands on the trophy.