Then-Celtic captain Brown approached Kamara after the Rangers player had been racially abused.

Scott Brown has been nominated for the FIFA Fair Play award for offering support to racial abuse victim Glen Kamara.

His gesture came after Kamara had been racially abused by Ondrej Kudela during a Europa League clash with Slavia Prague.

Czech Republic international Kudela was handed a ten-match ban which forced him to sit out the European Championships.

Brown, now at Aberdeen, has been joined on the FIFA shortlist by the Denmark national team and Italian manager Claudio Ranieri.

Denmark are being recognised for their response to the collapse of midfielder Christian Eriksen, who survived a cardiac arrest at Euro 2020.

His teammates created a shield to allow Eriksen to be treated privately and comforted the player’s wife.

Ranieri, meanwhile, ordered his Sampdoria side to perform a guard of honour for newly crowned Italian champions Inter Milan. 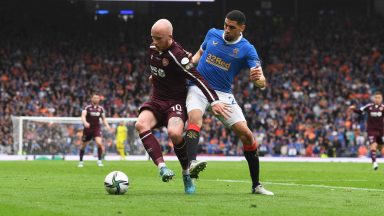 Road to Hampden: How Hearts and Rangers reached the Scottish Cup Final