Nicola Sturgeon says she hopes to be among the Tartan Army cheering on Scotland at Euro 2020 this summer. 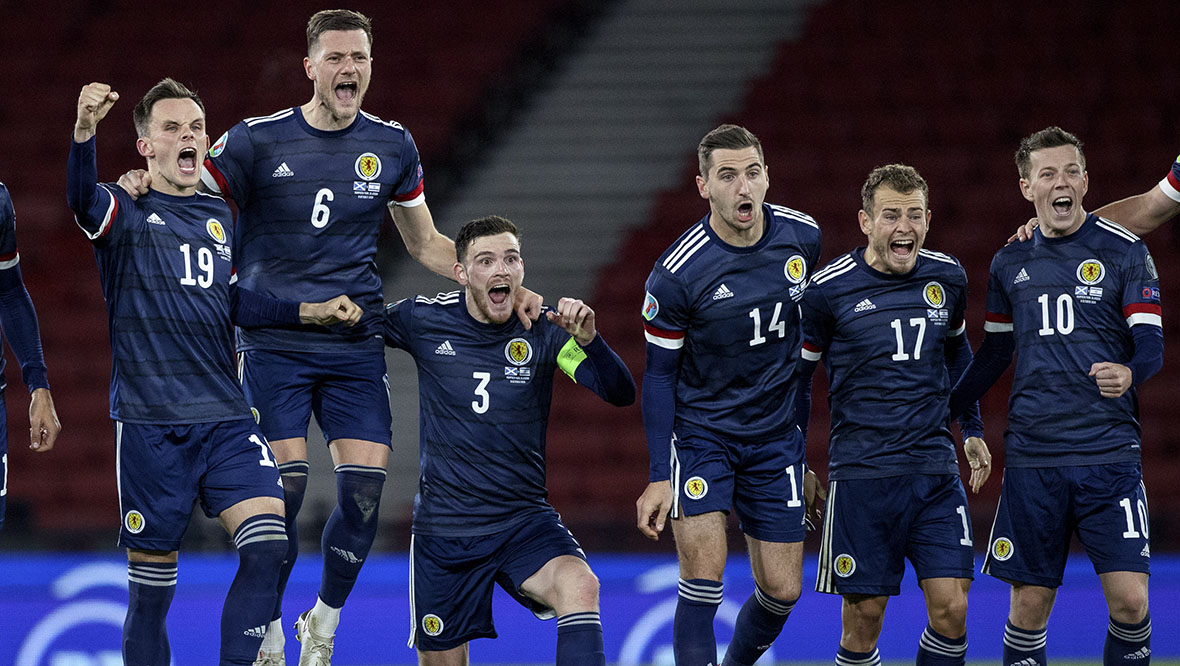 The First Minister said she hoped to be among the Tartan Army cheering on the men’s national team, who qualified for their first major tournament in 23 years by defeating Serbia on penalties last November.

Scotland are scheduled to open their campaign against the Czech Republic on June 14 and will also face Croatia in Glasgow on June 22 – either side of a Wembley encounter against England.

But there are doubts over Glasgow remaining as a host city because no guarantees have yet been made about fans attending matches.

Sturgeon said: “I certainly hope so and nobody wants Scotland to ‘lose the Euros’ and I don’t think we should be in the position right now of thinking that’s the case.

“There’s a deadline by which all countries have to give indications to UEFA about what they think will be possible in terms of fan attendance and fan zones.

“All countries are grappling with this, not just Scotland. We’re standing here on March 5 and, while we’re really hopeful – and I think you’re getting signs of a lot of optimism from us today – looking too far ahead is just difficult to do.”

The Scottish Football Association says it remains in talks with UEFA about Hampden hosting four matches at this summer’s European Championship.

Scottish football’s governing body released a statement on Thursday, saying it hopes that “as many fans as possible” can attend the fixtures scheduled to take place in Glasgow.

It comes after sources told The Associated Press that Bilbao, Dublin and Glasgow are at risk of being dropped over the lack of guarantees about the number of fans that could be allowed into stadiums by June

STV News asked Sturgeon at her daily coronavirus briefing whether the Scottish Government could give UEFA the necessary assurances required for fans to be allowed inside Hampden.

She said: “Let me be very clear, we are absolutely intent on having the Euros, having Hampden as one of the host stadiums of the Euros, we’ve always been intent on that – let’s say we’re particularly keen on it now that that would bring the opportunity to see Scotland play at Hampden as well.

“So while nothing in a global pandemic can be certain when you’re looking far into the future I very, very, very, very, much want and hope – and hopefully over the next few weeks get a greater degree of confidence in saying expect – to be one of many Tartan Army fans cheering on Scotland at Hampden later in the year, so let’s keep our eyes on that prize.”

UEFA has an executive committee scheduled for April 19, where it is possible decisions on whether to withdraw hosting rights from one or more cities could be taken.

The 12 hosts will be asked to effectively make a minimum guarantee on capacity limits by April 7 and UEFA anticipates the cities will wait until the last moment to commit themselves to a position.

They will be asked to consider the most realistic of four scenarios, ranging from a 100 per cent capacity venue to playing behind closed doors.

Scottish Conservative leader Douglas Ross said it would be “terrible” if Scotland could no longer host fixtures at the tournament.

He said: “Public health must always be the number one priority but I would urge the SNP government to get round the table with the footballing authorities as soon as possible.

“Our fans deserve to see Euros matches kick off in Scotland and every effort must be put into making sure that happens.”