A look back at when Zenit faced Rangers at the City of Manchester Stadium. 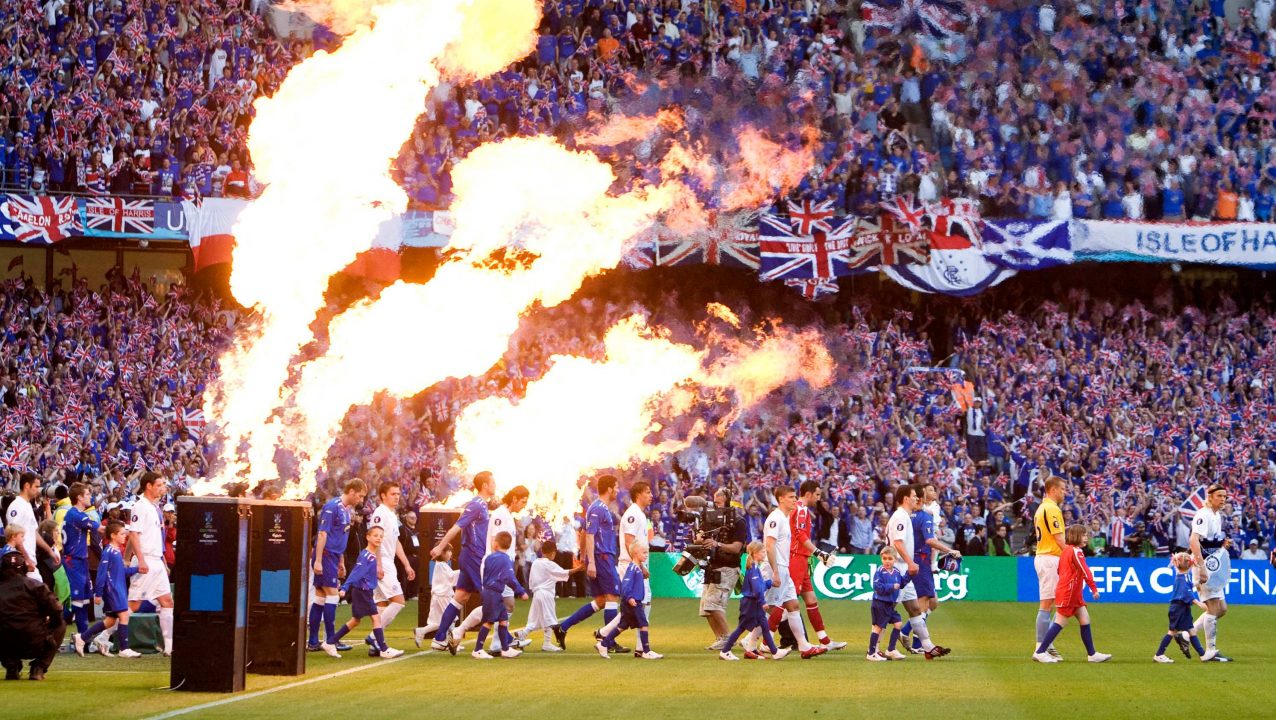 Thousands of fans are following Rangers to Seville for the Europa League final this week – knowing games of this magnitude don’t come along too often.

In the history of European club competition, Scottish sides have only contested nine finals – most of which were half a century or longer ago.

Rangers were the last team to go toe-to-toe with a foreign opponent and a trophy on the line, facing Zenit St Petersburg for the UEFA Cup in 2008.

How did Rangers reach the final?

After failing to progress from a Champions League group containing Barcelona, Lyon and Stuttgart, Rangers found a home in the UEFA Cup knockout rounds and squeezed past Panathinaikos in the last 32 thanks to the away goals rule.

Werder Bremen were despatched at the next stage and Sporting Lisbon were beaten in the quarter-finals.

That set up a showdown with Fiorentina to reach the final and after a tense but memorable penalty shoot-out in Florence, Rangers marched on.

The Ibrox side were in their first European final since 1972. And after a European campaign consisting of 18 matches across nine countries, there was only one game left to play and it was just a short drive down the road.

Destination: Manchester and a date with Zenit St Petersburg.

Zenit had an equally arduous journey to reach the final.

The Russian side, managed by former Rangers boss Dick Advocaat, had actually struggled in the group stage, squeezing into the knockout round in third place behind Everton and Nurnberg – gathering just five points from four games and a goal difference of zero.

From that start, few would have backed them to progress, but ‘the little general’ marshalled his troops and took them past Villarreal and Marseille, both on away goals. That set up a quarter-final with Bayer Leverkusen and the moment when the team began to really motor.

A 4-1 win in Leverkusen in the first leg as good as settled the tie and, despite a 1-0 reverse in the home leg, Zenit marched on. Their semi-final task was to take on another German side, but one of a higher calibre.

When Ribery put Bayern 1-0 up in the first leg, most expected it to be the start of the German giants’ smooth passage to the final. Instead, a Lucio own goal gave Zenit a draw on the night and hope for the second leg.

The return match was more than conclusive, but wasn’t won by the favourites. Zenit scored twice in each half to take a 4-0 win, 5-1 on aggregate, and head to the final.

A team that enjoyed the talents of Igor Denisov, Pavel Pogrebnyak, Anatoliy Tymoschuk and the rising star Andriy Arshavin would soon be well known to Rangers, though former Ibrox favourite Fernando Ricksen would be the first name they would recognise on the Zenit team sheet.

Rangers manager Walter Smith had got used to a couple of things during the run to the final. Being underdogs was the first, and the second was the defensive approach to football he had deployed against better-fancied opponents.

The run up to the final was no different.

“But, for a first-year team, we’ve settled in well and, for those teams that have lost to us, if they are that good, why have they not beaten us?”

The story goes that Smith had actually been inspired to adopt the ultra-conservative approach, dubbed ‘Wattienaccio’ by some, after Billy Reid’s Hamilton Accies had taken similar steps to frustrate his own Rangers side in domestic competition.

Regardless of the tactics, the Ibrox boss had admitted to a bit of surprise at taking his team so far, especially so early in his rebuild after the Paul Le Guen era.

Now ready to pit his wits against Advocaat, he had expressed his admiration of Zenit’s football, saying one result demonstrated their danger.

“I think Zenit are favourites because of their result in the semi-final,” he said. “For Zenit to beat Bayern, who are well ahead in the Bundesliga, in the manner they did, makes them favourites for this game.

“You only have to look at the semi-final matches – 1-1 in Munich was an excellent result but 4-0 at home was exceptional and probably the result of the season in Europe. That’s how good they are.”

At the age of 60, Smith had already experienced plenty and won more than most. As the game drew closer for him, he appreciated the size of the occasion.

“It will be a very difficult game, but once you get here, you realise just how much it means to everyone,” he said. “It starts to take over everything else.”

Rangers weren’t just battling to lift the UEFA Cup that month. European success had gone hand in hand with domestic form and the team were locked in a fight with Celtic for the league title, and with the League Cup already in the bag, gunning for the Scottish Cup as well.

That mix meant a packed fixture list and, as early as April, discussions about likely congestion had persuaded the SPL to extend the season by four days if Rangers reached the UEFA Cup final.

That prompted Celtic chief executive Peter Lawwell to question whether the competition’s “sporting integrity” had been damaged. Walter Smith’s response was that “Peter would be better coming out and saying he wants Rangers to play four games in a week because it suits his team and helps their quest to retain the championship”.

A further request to the SPL and SFA for help was rejected, leading to Rangers chairman David Murray saying the football world would be “laughing in disbelief” at how his club were being treated.

Zenit were allowed to postpone three matches, allowing two weeks’ preparation as the team travelled to the Netherlands for a training camp and warm-up friendly against AZ Alkmaar.

After losing twice to their rivals either side of the first leg against Fiorentina, Rangers were playing catch-up, but in the two matches ahead of the final they beat Motherwell and Dundee United to pull to within a point of Celtic. And then all attention turned to Manchester

With the final virtually on their doorstep, it was no surprise that the proportion of the Rangers support travelling for the final was far greater than if it was being staged in mainland Europe.

Rangers had arranged to show the game on beamback at Ibrox, but for most that wasn’t the UEFA Cup final experience they were looking for,

An estimated 150,000 fans travelled to the English city, and only a small proportion had golden tickets to actually enter the City of Manchester Stadium. Zenit had been allocated 8,600 seats, Rangers’ share was 17,000, but with a large neutral area being populated by those backing the Glasgow club, the full size of the Rangers support was around 30,000 in the ground.

Outside the arena, fans watched in pubs around the city and large crowds gathered in the designated fan zones to see the game on giant screens (a proposal to show the game at Old Trafford didn’t get beyond early talks).

While Manchester Police said that the vast majority of the support were well behaved, some violent incidents began on the day of the game and 39 arrests were made. When the screens failed at the fanzone in Piccadilly Gardens, fans and police clashed.

While the flashpoints in the city generated headlines, in the stadium, the focus of Walter Smith and his players was on the match of a lifetime.

Smith hinted in the build-up that his ‘safety first’ attitude had been well-suited to home and away ties, but a more expansive approach might suit the final. The reality was that he largely stuck to what had taken him so far, naming a solid team with two defensive midfielders.

With Allan McGregor injured, Neil Alexander continued in goal and Sasa Papac, Carlos Cuellar, David Weir and Kirk Broadfoot made up a back four.

Five players were strung across midfield, with Steven Davis, Kevin Thomson, Brahim Hemdani, Barry Ferguson and Steven Whittaker all tasked with protecting the defence out of possession and supporting lone striker Jean-Claude Darcheville when Rangers got on the front foot.

Zenit were without Pogrebnyak, who was suspended, but Fatih Tekke started up front with Arshavin and Viktor Fayzulin either side of the striker.

The action played out as predicted in the early stages with Rangers sitting deep and Zenit stepping up.

Arshavin hit the side netting with a shot after three minutes and Tymoschuk and Alexandr Anyukov tried their luck from distance.

Ferguson had a half-chance after a Rangers break and Whittaker headed over from a Davis cross, but neither side could get in front.

Zenit had enjoyed the majority of possession and had probed for openings throughout, but it was Rangers who went closest early in the second half when Ferguson pounced on a loose ball and hit the post.

The Zenit pressure was looking likely to lead to a breakthrough and Arshavin thought he had given his side the lead when he chipped Alexander only to see Papac clear. But the Russian side got their goal after 72 minutes.

Igor Denisov played a one-two with Arshavin before finishing past Alexander and Zenit had the advantage.

Rangers opened up in pursuit of an equaliser but couldn’t get an opening and, in the dying moments, Zenit put the match beyond reach when Konstatin Zyranov finished from close range.

Zenit were UEFA Cup winners and Rangers’ dream was over.

If ever there was a time to take the positives, this might have been it. After a hard grind to reach the final, Rangers came up short against a slick, energetic, attacking side.

“Over the tournament, we’ve worked very hard to get to the final – there was not that much in it overall and we had a few chances ourselves,” Rangers boss Smith said after the final whistle.

“Zenit looked the more offensive team, but obviously at this stage I’m disappointed to have lost.

“We’ve had a terrific tournament. In the end, I can have no complaints.”

Advocaat believed his side were deserved winners, but had words of consolation for his old club.

“I think what they have done this year with the squad they have is great, playing in four competitions,” he said.

“And hopefully they can go on and win the championship and the Scottish Cup.”

The disappointment in the final was followed by further heartbreak as Celtic went on to lift the title, though a win over Queen of the South ensured another Scottish Cup win.

The team’s run to the final remained unequalled by any squad in the years to follow though. Until now.