Kirkcaldy club at centre of storm after signing former Scotland international Goodwillie on a contract until 2024. 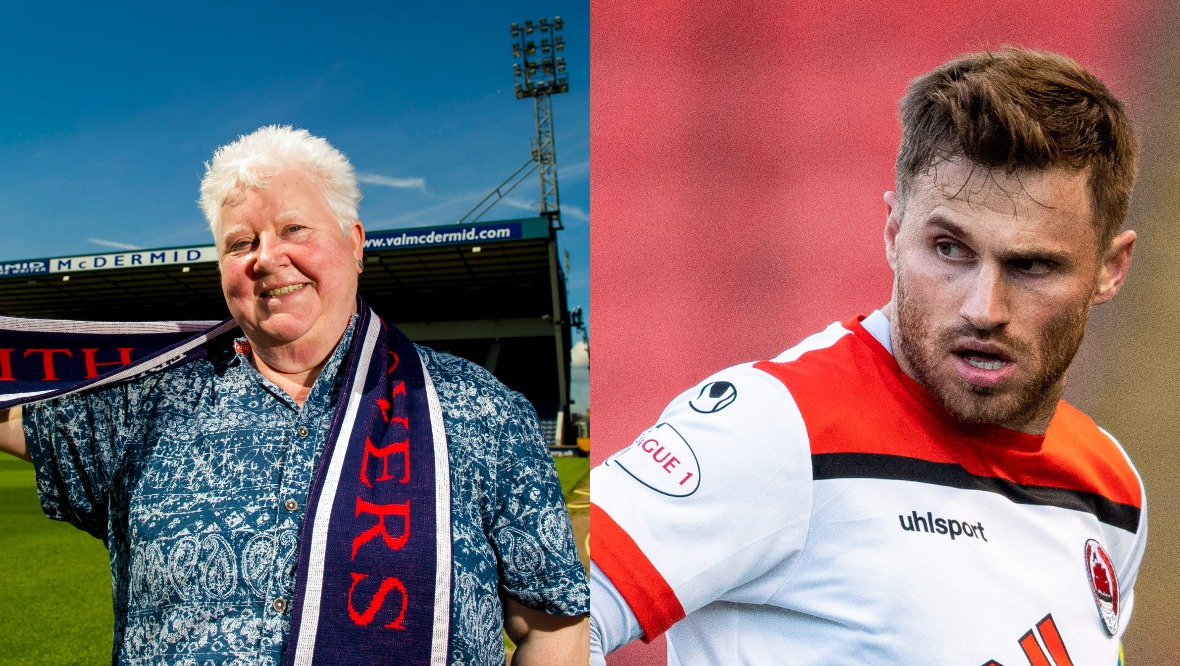 The Kirkcaldy outfit announced a deal had been done to sign the 32-year-old from Clyde late on transfer deadline day on Monday, with Goodwillie signing a contract until 2024.

Crime author Val McDermid subsequently announced on Tuesday morning she had “ended her lifelong support” of the club and had cancelled next season’s shirt sponsorship.

From that point, the pressure intensified further as fellow supporters, board members and even the First Minister weighed in on the controversial signing.

Here is a recap of the current situation and the fallout that has ensued.

WHO IS DAVID GOODWILLIE?

David Goodwillie is a seasoned professional footballer who has played for numerous clubs in Scotland and England including Dundee United, Aberdeen, Blackburn Rovers and Clyde. He has also represented Scotland at senior level on three occasions, scoring one goal.

On purely football terms, likely because they are struggling to score goals in their quest to reach the Scottish Premiership.

Goodwillie has scored more than 100 goals since signing for Clyde and it appears senior football figures at the club decided the risk of signing him did not outweigh the reward.

WHAT IS THE CONTROVERSY LINKED TO GOODWILLIE?

Goodwillie and his former Dundee United team-mate David Robertson was ordered to pay £100,000 in damages by a judge in a civil court case in 2017 after it was ruled they raped a woman at a flat in Armadale, West Lothian.

No criminal charges had been brought against either of them due to insufficient evidence.

WHAT HAS THE FALLOUT BEEN?

In a word: Furious.

Writer Val McDermid, a former Raith director whose name adorns the club’s home shirts, had warned against the signing of Goodwillie several weeks ago.

After the signing was announced she tweeted: “I have this morning ended my lifelong support of @RaithRovers over their signing of the rapist David Goodwillie. I have cancelled next season’s shirt sponsorship over this disgusting and despicable move. This shatters any claim to be a community or family club.

“Goodwillie has never expressed a shred of remorse for the rape he committed. His presence at Starks Park is a stain on the club. I’ll be tearing up my season ticket too. This is a heartbreaker for me and many other fans, I know.”

McDermid withdrew her sponsorship in disgust as she added: “The thought of the rapist David Goodwillie running out on the pitch at Stark’s Park in a Raith Rovers shirt with my name on it makes me feel physically sick.”

The author’s stance was applauded by high-profile names spanning the worlds of politics, sport and entertainment.

The captain of Raith’s women’s team, Tyler Rattray, announced she was quitting over the club as a direct result of the signing.

She tweeted: “After 10 long years playing for raith, it’s gutting I have given up now because they have signed someone like this and I want nothing to do with it! It was good being captain of raith while it lasted.”

First Minister Nicola Sturgeon said: “The stances that @valmcdermid and women’s team captain @Tyler_RattrayX have taken are principled – though difficult for both of them.

“But the fact they’re in the position at all reminds us that our society still has a way to go to make zero tolerance of sexual violence a reality.”

The former Labour leader said: “I have always supported Raith Rovers but I have told Raith Rovers that I cannot support this signing.”

He added: “I condemn rape and all violence against women.

“Because of the number of recent examples across football, I urge the football authorities to set out a policy to address cases of violence like this.”

Rape Crisis Scotland it was “surprised and deeply disappointed that @RaithRovers are happy to send such a clear message of disregard to survivors of rape and sexual violence”.

HAS ANYONE ELSE AT THE CLUB RESIGNED?

Yes. Several directors have quit their positions, as has the club’s tannoy announcer.

Tannoy announcer Johnny Macdonald said: “Sadly I have decided to walk away from the announcing duties at the rovers. Never felt this way about my club in over 40 years supporting them.”

Paul Farley – chairman of away shirt sponsors Tag – tweeted: “Have written to @RaithRovers ending @TagGames future shirt, or other, sponsorship and requesting our branding removed from shirts for the remainder of the season.

“We stand with @valmcdermid and the majority of fans against violence towards women.”

WHAT ARE THE FANS DOING?

Raith take on Queen of the South in the Scottish Championship at Stark’s Park on Tuesday evening – it is unclear if Goodwillie will be in the match day squad but it will be interesting to see if there’s any public signs of anger under the floodlights in Kirkcaldy.

The Raith Supporters Trust said the signing of Goodwillie “runs contrary to the values of Raith Rovers as an inclusive club at the heart of its community”.

It plans to meet fans ahead of kick-off “to listen to the views of our members and the wider support, in order that we can properly represent their views in discussions with the club”.

In the meantime, Raith fans have set up a Just Giving page to fundraise for Rape Crisis Scotland. The fund has raised more than £4000 since it was set up on Tuesday.

Several prominent fans have voiced their disgust on social media.

The Fife Free Press, Kirkcaldy’s local newspaper, has started a petition to “remove David Goodwillie from Raith Rovers and re-establish the team as a family club”.

WHAT ARE RAITH SAYING?

In a statement released on Tuesday evening, Raith said: “David is a proven goal scorer, and this will be his second stint with the club, having previously played for us on loan from Dundee United during season 2007-08.

“As with all new signings, the club has carefully considered our position as a Community Club and we completely respect the differing views among fans and stakeholders, many of whom we have spoken to directly in the past 24 hours and are continuing to engage with.

“As David has previously played for Raith Rovers earlier in his career, we consider him to be part of the Raith Rovers Football Club. The management team is familiar with David’s career and background and – in particular – his footballing ability. That is our foremost consideration, and we believe that he will strengthen the Raith Rovers playing squad.

“Please be assured that as a community football club we fully acknowledge this signing has divided opinion amongst our loyal fans and commercial stakeholders; we aim to rebuild that trust.

“While acknowledging the gravity of what happened ten years ago, as a club we fully support and encourage rehabilitation, and many factors influenced our signing. But first and foremost, this was a football related decision.”