Anniversary of first ever international match, which took place in Glasgow in 1872. 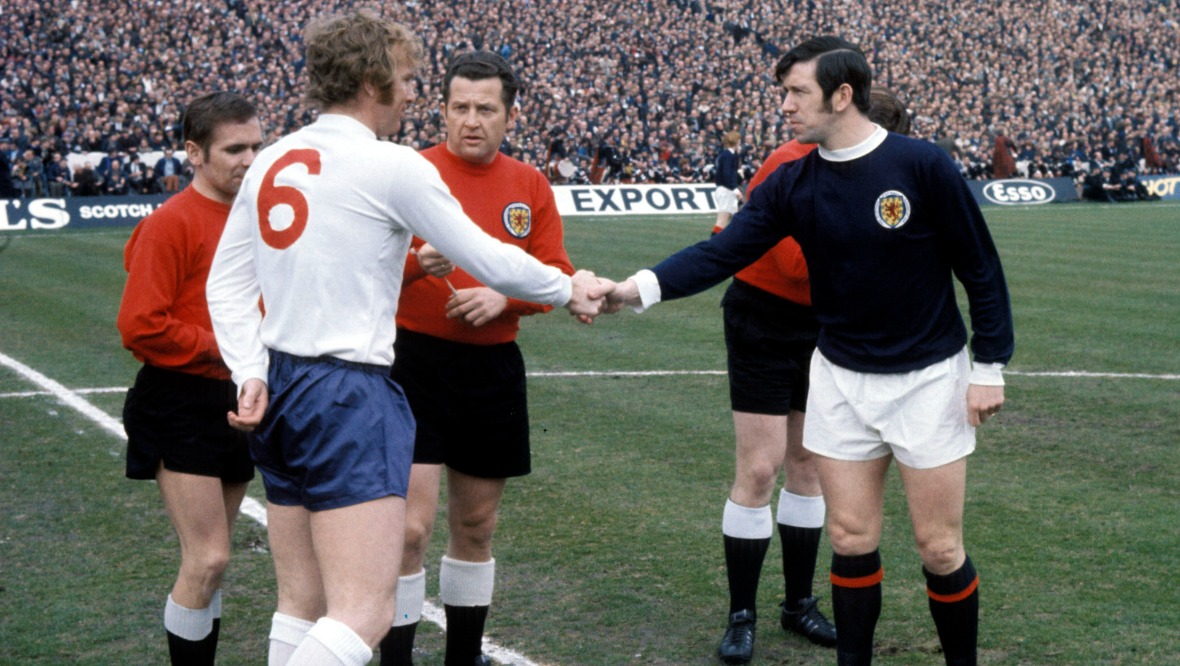 It’s 150 years since Scotland and England met in the first ever international football match.

The 0-0 draw at the West of Scotland cricket ground in Glasgow was the first of 116 matches played since 1872.

The most recent clash also finished goalless, at Wembley in the Euro 2020 group stages last summer.

The Auld Enemy will meet again in September 2023 to celebrate the anniversary of their first-ever meeting.

Here, we look back at six unforgettable clashes between the rivals.

The Tartan Army crowned their team the ‘unofficial world champions’ after Alf Ramsey’s side were beaten for the first time since winning the World Cup.

Denis Law, Bobby Lennox and debutant Jim McCalliog scored the goals – but the winning margin was not as big as it could have been, with Jim Baxter preferring to savour the moment with his keepy-uppie routine, rather than push for more goals.

Scotland joyously marked the summer of love by cavorting across the Wembley turf.

There was only ever going to be one fixture to mark the centenary of the Scottish Football Association, but the result proved anything but a celebration for the home contingent.

Almost 50,000 fans were tempted to a snowy Hampden Park on Valentine’s Day.

Alf Ramsey’s team had the game won inside 15 minutes – an own goal from Peter Lorimer followed by efforts from Allan Clarke and Mick Channon.

Scotland’s expected fightback was not forthcoming and England’s day only improved as Martin Chivers and Clarke’s second spoiled the party.

Turf luck for England at Wembley

Scotland’s first win in the fixture for a decade is as well remembered for the post-match celebrations as it is for the 90 minutes of on-field action.

Away fans poured from the stands after the whistle, dragged down the goalposts and helped themselves to souvenir slices of the Wembley pitch.

Gordon McQueen and Kenny Dalglish sealed the win for Scotland despite a late Mick Channon penalty.

The Euro 96 meeting is remembered by England fans for Paul Gascoigne’s stunning goal – but for Scots the abiding memory is Gary McAllister’s missed penalty.

The Wembley date came after both drew their opening game, with Gazza’s wondergoal separating the sides in a tight game.

‘Luckiest team in the world’

A place at Euro 2000 was at stake in a two-legged play-off that saw away wins in both games.

Paul Scholes scored both goals in a 2-0 win for England at Hampden, but any comfort they enjoyed evaporated four days later at Wembley as Scotland dominated a game settled by Don Hutchison.

England boss Kevin Keegan would later admit his team were “the luckiest in the world”.

A trip to London seven months earlier had proved a damp squib for Gordon Strachan’s men, who played well for spells but were soundly beaten 3-0.

The return fixture towards the end of World Cup 2018 qualifying was a much more stirring affair, not least in a tumultuous conclusion.

Alex Oxlade-Chamberlain got the ball rolling for England before Leigh Griffiths broke his international duck in stunning fashion, bending a pair of free-kicks into either corner of Joe Hart’s goal in the 87th and 90th minutes.

The result left Scotland’s hopes of reaching the World Cup dangling by a thread.