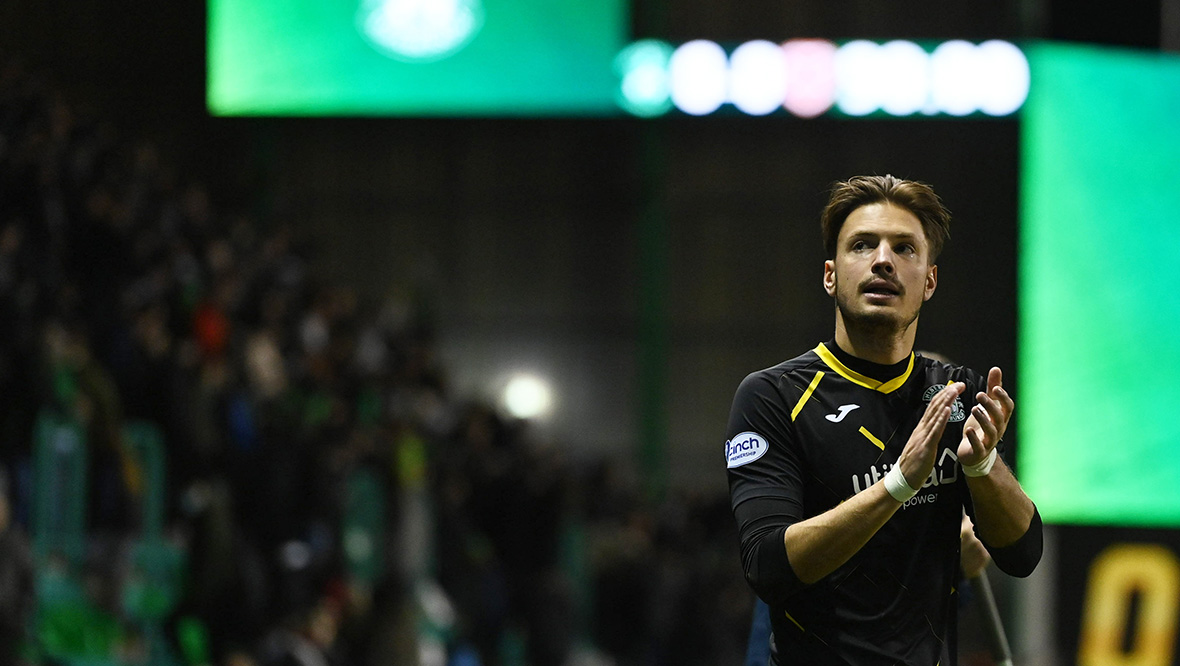 Hibs goalkeeper Kevin Dabrowski was overcome with emotion after a man-of-the-match performance on his debut in the Edinburgh derby last night.

Dabrowski, who joined the Easter Road club five years ago, was finally handed his first competitive appearance following an injury to regular number one Matt Macey.

And he made an important contribution to help his team claim a point from a game in which Hibs had the better of the first half and Hearts were on top in the second period.

Dabrowski told STV News: “It just couldn’t get any better, especially when I found out I’m going to make my debut against Hearts at home.

“It was just amazing. My feelings were mixed up – like I’ve been excited, emotional and nervous – everything was in me.

“I know how to manage all this emotion to put that on the pitch and perform as best as possible.

“I’ve been on the bench as well for like 50, maybe 60, times unused, so it was very difficult for me, especially as I had to fight with my own mentality because many people just wanted to leave.

“But I’m just in love with Hibs, the club for me is a second home. I sacrificed everything to be here. The way I’ve been treated by the fans and everything, I just wanted to back them as well and to be grateful for them and to show up, show off, one day on the pitch.”

Hearts had a great chance six minutes after the break at Easter Road when Barrie McKay released Ellis Simms with a lovely pass but Dabrowski made an excellent save to deny the on-loan Everton striker.

The goalkeeper pulled off another couple of impressive saves to thwart Simms as Hearts enjoyed the bulk of the second-half pressure.

Hibs almost won it themselves in the 90th minute when substitute Josh Campbell saw a shot blocked on the line by Toby Sibbick.