Connor Goldson: I was so angry I wanted to hurt someone 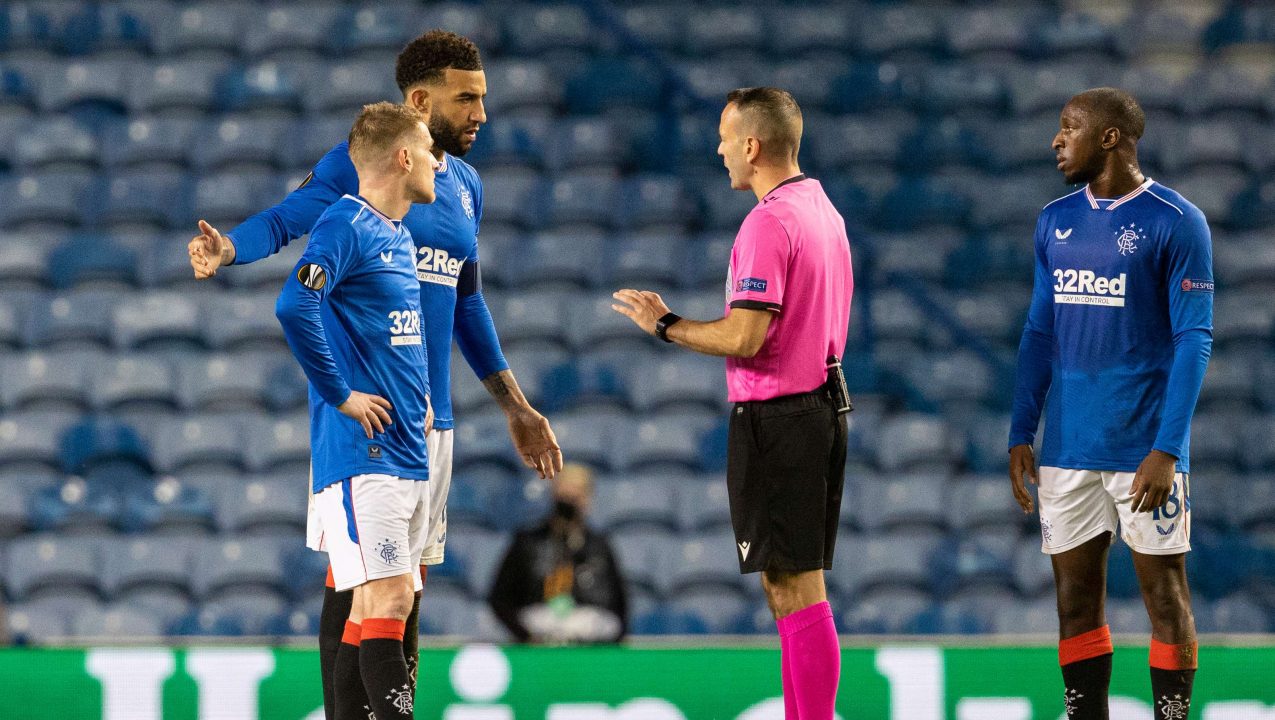 Rangers defender Connor Goldson has revealed that the racial abuse flashpoint in the Europa League match against Slavia Prague made him so angry he wanted to hurt one of his opponents.

The match at Ibrox was overshadowed by a second half incident when Slavia’s Ondrej Kudela approached Glen Kamara with his hand covering his mouth and said something to the Rangers midfielder.

Kamara and teammate Bongani Zungu reacted angrily, saying that Kudela had racially abused his opponent. Goldson, wearing the captain’s armband in place of injured James Tavernier, became involved in the angry conflict that ensued, and was shown a yellow card for his behaviour.

Slavia have since denied the accusation of racism, making a statement Rangers have taken issue with, and Goldson was dismissive of the Czech side.

“It wasn’t allegedly said – it was said,” the player insisted.

“I’m disgusted with what happened. I didn’t hear it myself but I know it happened 100%.

“I know how Glen is. In the two-and-a-half years he’s been here I haven’t known him to be angry or emotional in any way so for him to get like that, I know that something was said and I believe him. That’s why I reacted the way I did.”

Goldson said that the incident left him so shaken and furious that he wanted to hurt someone.

“I’ve never been so angry on a football pitch,” he said. “I’ll be honest, I completely lost my cool.

“For the remaining however long it was in the game, all I wanted to do was hurt someone. I’ve never been like that before on a football pitch.

“The player couldn’t even look me in the eyes, wouldn’t speak to me.”

Rangers have reported the matter to UEFA and called on the governing body to take swift and serious action, but Goldson has little faith that the game will act properly to stamp out racism.

“It never will get eradicated because there are so many token gestures,” he said. “Taking a knee? Token gesture from the higher authorities to make it look like they are doing something to help.

“They’re not doing anything because when these things happen there’s no consequence.

“There might be a fine but it’s never enough. You could fined more for showing an advert on underwear than you do for being racist or a player being racist towards someone.”

The 28-year-old also addressed the aftermath of the game, where Rangers players were subjected to racist abuse online.

“I just wish it wouldn’t happen,” he said. “We’re in an age where a lot has moved forward but at the same time when it comes to social media so much has move backwards.

“You have the incident on the pitch where you’re already angry and then you come into the changing room and boys look at their phone and you’re seeing all sorts of racism from sections of their fans. It’s so hard to take.

“You’ll never understand how hard it is when you work so hard to become a professional footballer, it’s hard enough as it is but then you have to deal with this.”