Gakpo enhanced his growing reputation with his third goal in three games. 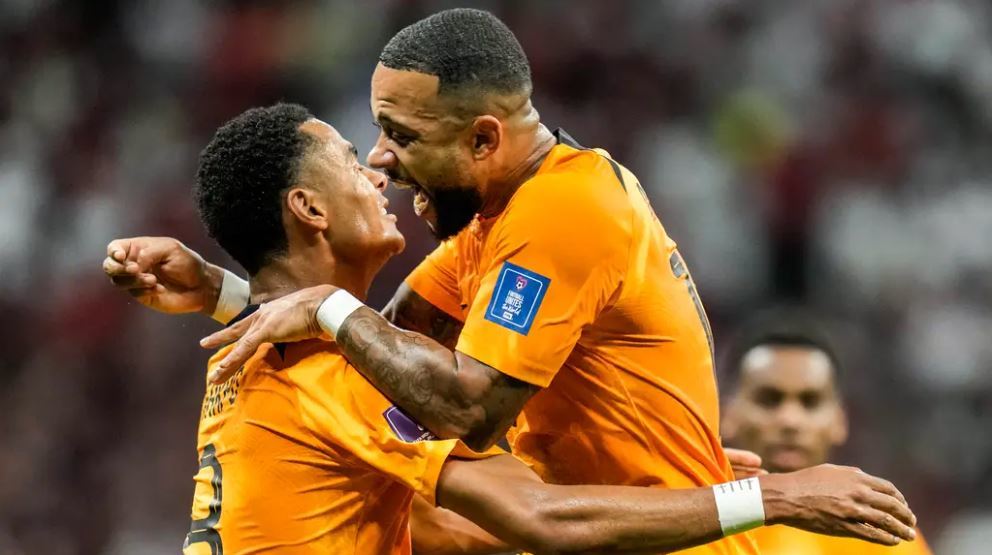 Cody Gakpo enhanced his growing reputation after becoming the first Netherlands player to score in each of his first three World Cup matches in a 2-0 victory over hosts Qatar.

The 23-year-old forward entered the tournament as one of the hottest prospects in Europe, with a number of top clubs closely tracking his progress after nine goals and 12 assists in 14 Eredivisie games for PSV Eindhoven this season, and his displays in the Middle East have only furthered his credentials.

His versatility across the front line has also been underlined by the nature of his goals, with his 26th-minute strike from the edge of the penalty area coming via his right foot having already scored with his left against Ecuador and his head versus Senegal.

Head coach Louis van Gaal has allocated special status to Memphis Depay, making an exception to include the long-time injured Barcelona forward in his squad, but his first start of the tournament was overshadowed by his strike partner who now currently enjoys the role as most important attacker.

Depay’s first start for any team since mid-September after a hamstring problem was a way of improving his match fitness against opposition who already knew they were exiting the tournament before the game kicked off after two uninspiring defeats.

The 28-year-old responded by starting the move which led to Gakpo’s opener and then inadvertently providing the assist for Frenkie De Jong’s goal just after half-time when his shot was parried by goalkeeper Meeshal Barsham.

Victory ensured Van Gaal’s side finished top of Group A with seven points, setting up a last-16 meeting with the runners-up from England’s group and extended their unbeaten run to 18 matches.

With Gakpo, a target for Leeds and Southampton in the summer, in the form he is the Dutch will fancy their chances in the knockout stages having failed to qualify for the last World Cup in Russia.

Not so Qatar, who have looked woefully out of their depth and are the first nation to lose three matches at a tournament they were hosting.

Having kept their opponents at bay for a quarter of the game they were undone by a relatively straightforward move as Depay dropped deep to pick up the ball and play it into Gakpo, who backheeled to Davy Klaassen and carried the return pass 10 yards further forward before beating Barsham from just inside the penalty area.

That saw him equal Johan Neeskens (in 1974), Dennis Bergkamp (1994) and Wesley Sneijder (2010) for scoring in three successive Netherlands World Cup matches but he is the first to do it in his first three.

Gakpo is also only the second player in the tournament’s history after Italy’s Alessandro Altobelli in 1986 to open the scoring on three occasions in the same group stage.

There was little sign of Qatar providing a response and that diminished further four minutes after the interval when Depay was denied at point-blank range at the far post by Barsham from Klaassen’s cross and De Jong reacted quicker than the defence to force home the loose ball.

Qatar escaped with more slack defending when substitute Steven Berghuis’ goal was ruled out by VAR due to a Gakpo handball earlier in the move, with the Ajax star also hitting the crossbar in added time.