Rangers had fought back from a goal down to lead but had to settle for a 2-2 draw. 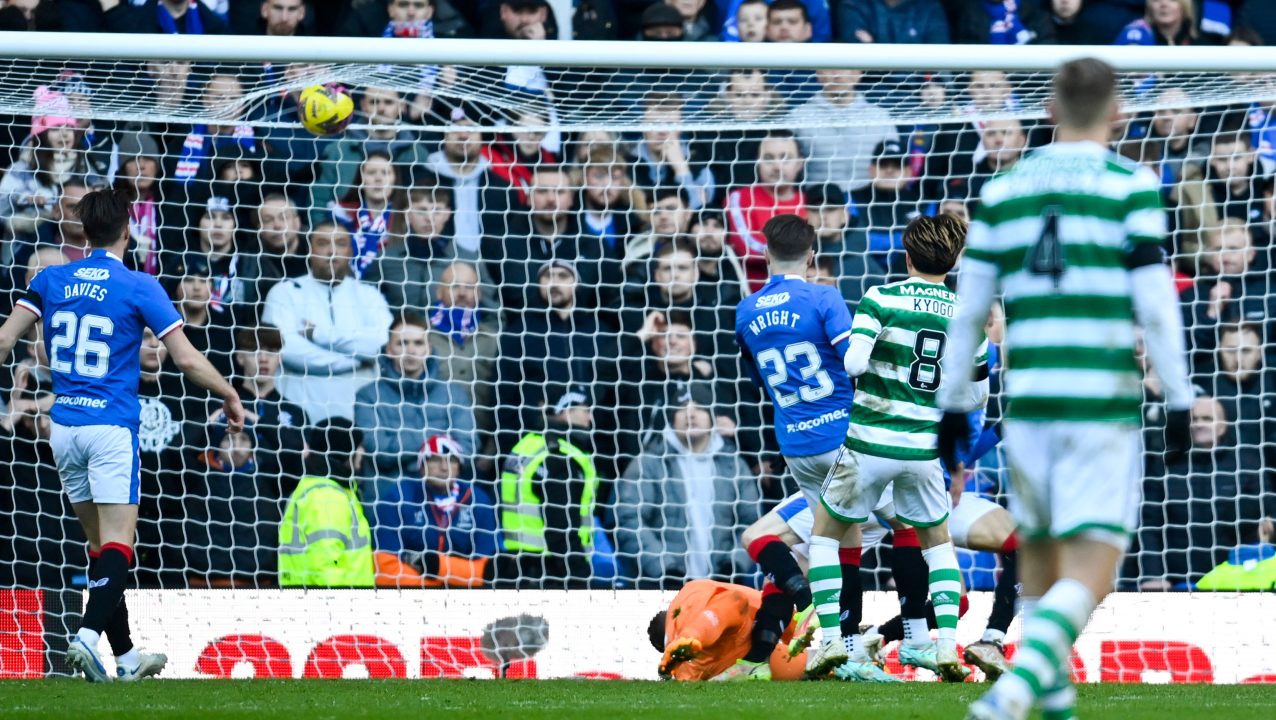 Kyogo Furuhashi scored a late equaliser to earn Celtic a 2-2 draw with Rangers at Ibrox and maintain his side’s nine-point lead at the top of the Premiership.

Daizen Maeda gave Celtic an early lead but Ryan Kent and James Tavernier scored second half goals to put Rangers in front before Furuhashi netted in the 88th minute to secure a point.

Both managers had big calls to make ahead of kick-off, with Michael Beale choosing Alfredo Morelos to start up front ahead of fit-again Antonio Colak and Kemar Roofe.

Ange Postecoglou had a bigger surprise in his starting line-up, handing a debut to Alistair Johnston at right back with Anthony Ralston injured and Josip Juranovic judged as not being ready to start after picking up a knock at the World Cup.

Rangers burst out of the blocks looking for a positive start sand registered the first shot after just 20 seconds. Ryan Kent found space to size up a shot and tested Joe Hart with a drive from just outside the box.

That early chance cranked up the noise inside Ibrox but the home support were quiet when Celtic took the lead four minutes in.

A slack pass from Morelos into the centre of the park allowed Maeda to steal in and the forward shrugged off a weak challenge from James Tavernier raced past Connor Goldson before slotting past Allan McGregor.

The goal settled Celtic and they had another opportunity minutes later when Maeda burst past Tavernier again before flashing a low ball across goal that nobody could get on the end of.

Twenty minutes in, the visitors were forced into a change. Greg Taylor suffered a hamstring injury and Josip Juranovic was pressed into action at left-back. The change didn’t change the dynamic of the game, with Celtic on top but both sides struggling to hold on to possession for long stretches.

Rangers needed something to lift their hopes and that came as the game approached the half hour mark. A pass from Hart came off Morelos and led to Kent having a pop, his low shot tipped on to the post by the Celtic goalkeeper.

That prompted the first real spell of sustained pressure from the hosts, with Barisic having chances to cross from the left and corners allowing set piece chances, though they couldn’t make more of their chances.

A James Forrest that Furuhashi missed in the centre of goal kept Rangers on their toes before Morelos had two chances just before the break, the second a header from a corner that went past the post.

Rangers boss Beale would have had the tougher half-time team talk but he got a reaction from his players after the restart when the Ibrox side equalised with the first chance of the second half.

Fashion Sakala found plenty of space on the right and picked out Kent, who dropped his shoulder cut inside before curling a well-struck shot past Hart.

Two minutes later, the hosts took the lead. Sakal took possession and Carl Starfelt took the decision to slide in with a tackle in the box. The Celtic defender didn’t get any of the ball and referee John Beaton pointed to the spot.

Tavernier took responsibility for the penalty and lashed the ball high into the corner to put his side in front.

Celtic made changes to try to turn the game in their favour, bringing on Aaron Mooy and Liel Abada for Matt O’Riley and James Forrest.

The visitors had a claim for a penalty of their own when Connor Goldson appeared to touch the ball with his hands, and television replays suggested there was a decision to be made, but VAR official Willie Collum opted against asking Beaton to review the incident at pitchside.

Rangers brought on Ryan Jack to replace Lundstram before Sakala had a chance when he carried the ball down the right channel but missed the chance to get a shot away.  The hosts then made a change up top with Scott Wright on for Morelos.

Celtic made a positive change to try to turn the match, bringing on Jota and Giorgos Giakoumakis for Maeda and Hatate for the final 15 minutes.

Postecoglou’s side had scored more goals in the final 15 minutes of games this season than anyone else in the Premiership but they were struggling to create chances, and Rangers brought on James Sands to help shore things up for the final minutes.

With just a couple of minutes of regulation time left, Mooy took possession on the left and tried to deliver into the box. The ball wasn’t properly cleared and fell to Furuhashi, who made no mistake with a thumping shot into the middle of the net.

That set up a high-octane finish and an added seven minutes meant both sides could harbour hopes of finding a final blow to take three points.

Despite a last push, neither team could find the cutting edge needed to settle the contest late on and the rivals had to settle for a point each in their first encounter of the year.