The Scot says his son has to "embrace the moment" when he faces Novak Djokovic.

His son has kept hopes alive of a third home win in the Wimbledon men’s singles in a decade with a dramatic five-set victory over Belgium’s David Goffin in the quarter-finals on Tuesday.

The ninth seed twice recovered from going a set down to claim a 3-6 7-5 2-6 6-3 7-5 victory on a raucous No 1 Court and become only the fourth British man in the Open era to reach the last four at the All England Club.

The 26-year-old will now face top seed Novak Djokovic in the semi-final later this week.

David Norrie, a microbiologist originally from Glasgow, said he struggled to watch the final points of his son’s match on Tuesday.

Speaking to BBC Radio 4’s Today programme on Wednesday morning, he said could “barely” watch, adding: “The last few points I was going to say, torture but in some ways it was a wonderful experience but it was hard to watch I must say”.

Mr Norrie said as someone who plays tennis himself, he’s aware of the “ups and downs”, adding that while tennis is a “wonderful game” it can also be “extremely stressful”.

He said: “I think what I have gained over the years is to be able to realise that matches that seem to be slipping away can sometimes change quite quickly and I think that’s what happened last night.”

Asked about how his son will cope with the added pressure of media attention, Mr Norrie said: “I think he’s doing fine.

“As anyone who watched the match last night could see the crowd actually lifted him really well when he was down two sets to one so he seems to be coping admirably.”

On his son’s psychological preparation, Mr Norrie said his son has an “overall goal to be the best tennis player he can be” and is “pretty well grounded”.

“And I think obviously for each of match there’s a plan depending on who he’s playing so he seems to be pretty well grounded.

“And I suppose you have to be playing a sport like tennis.”

On what advised he will give his son ahead of the semi-final, Mr Norrie said he’ll tell the 26-year-old to “embrace the moment”.

He said: “I’m not just going try and ask him and tell him if he can enjoy the moment because it’s not that often you get to the semi-final of a grand slam no matter what level you play.

“So he must just embrace the moment and try and use the crowd as well as he did last night, I guess.”

Norrie’s father and mother Helen travelled over from their home in New Zealand to watch their son this summer.

In his post-match interview on Tuesday, the 26-year-old spoke about the matches being “stressful” for his parents to watch.

He said: “I think every match that I’ve won this week my mum has cried.

“The matches are getting bigger and the moments are getting more special. I think they’re just super happy for me that I’m doing something that I love, and it’s just a bonus that I’m winning. I think it was probably pretty stressful for them today.

“They came over after the match when I was on the bike and both gave me a big hug, and my sister too. Very cool to have them here watching. Obviously very rare for them to be here, especially over the last couple of years.

“To see me playing at the level that I have been and to get some wins and to experience moments like that is exactly why they came.” 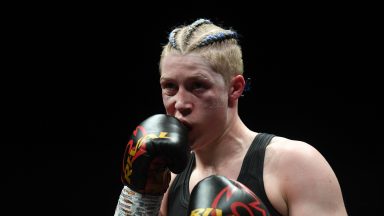