A banner, surrounded by fire extinguishers and cardboard flames were displayed in Glasgow's city centre. 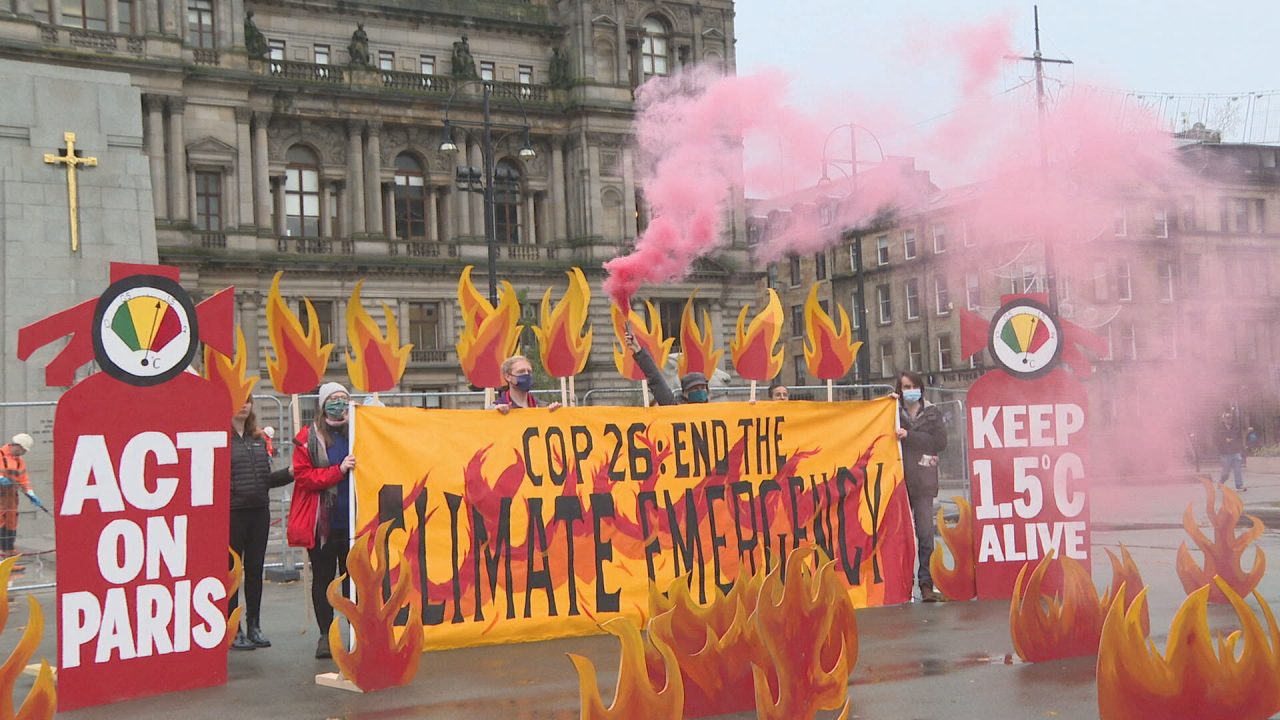 By Lewis McKenzie and Polly Bartlett

A group of young activists have held a demonstration in George Square calling for COP26 to bring an end to the climate emergency.

The display, held in Glasgow’s city centre on Thursday afternoon, was aimed at highlighting the extent of the crisis, as well as urging world leaders to use the summit to fulfil their pledges during climate negotiations.

Speaking with STV News, climate activist Dylan Hamilton said that the situation is “life or death” for people living in developing countries.

“Today we are reminding people that the earth is literally on fire and that we don’t have any more time to delay,” said Dylan.

“For young people, we’re going to live with the impacts of this conference for many, many years to come.

“If I live to the same age as my great-gran, I’ll see the next century. So, it’s very much right now for us.

“It’s incredibly important to us, but at the same time, it won’t affect me as much as it will affect a young person in a developing country.

“So, it’s important to me as a young person, but it’s also a right now thing.”

Dylan outlined the need for world leaders to understand the urgency of the crisis.

He said: “It’s almost an expectation that they won’t come to the conclusions that we need because they don’t seem to have understood that the urgency of the crisis, which is what we’re trying to communicate today.

“They still seem to think it’s okay to set targets for 2050 that they won’t really have to see through.

“So, we want them to have said that they have to take as much things as they can now.”

Asked what message he would send to world leaders, Dylan said: “I would say please just look at this objectively, don’t look at it with your politics in mind

“It’s pretty clear that it’s happening now, it’s been happening for decades, and just try and understand the urgency that it will be over the next decade.

“Even if you won’t see it, it’s going to have a pretty big impact and most world leaders have families, they’re going to have live with the ramifications of that.”