The Met Office has issued a yellow weather alert for most of mainland Scotland on Friday. 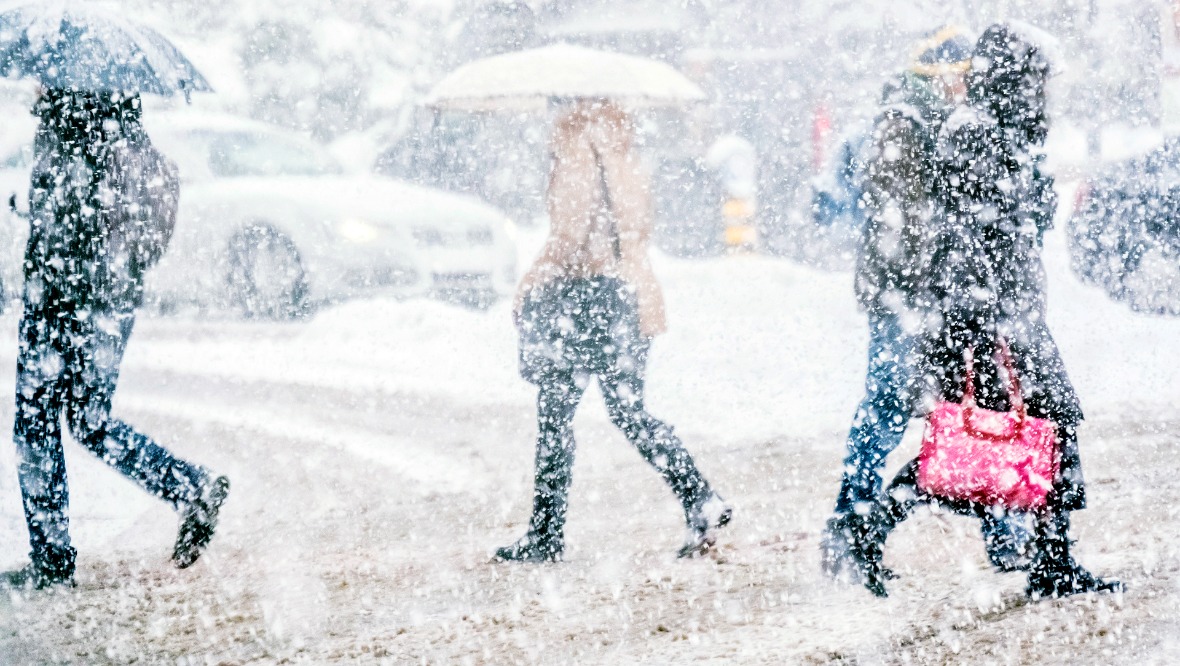 Scots are being warned to brace for snow as Storm Eunice gets set to sweep in.

The Met Office has issued a yellow weather alert for most of mainland Scotland on Friday.

The cold snap, following the strong winds of Storm Dudley, is expected to last from about 3am until 6pm.

The warning stretches across parts of Dumfries and Galloway, the Scottish Borders and Lothians, Ayrshire, Glasgow, Lanarkshire, Stirling, Fife, Tayside, Perthshire, Aberdeenshire, Moray and the Highlands.

Experts are warning that the bad weather could lead to power cuts, travel delays on roads, and cancellations to rail and air services.

As well as the possible stranding of vehicles, there is also a “slight chance” that some rural communities could be temporarily cut off.

Storm Eunice follows the strong winds of Storm Dudley, which led to travel disruption across the country.

ScotRail services were wound down by 4pm on Wednesday due to amber weather warnings for high winds, though some services began running again on Thursday morning following safety checks.

During the storm, a gust of 74mph was recorded at Drumalbin in South Lanarkshire.

Meanwhile Network Rail shared a video of a fallen tree in Beattock, Dumfries and Galloway which hit overhead power lines on the railway, causing a spark.

In response to the weather warning, the Scottish Government is urging people to exercise caution and follow the latest travel advice.

Deputy first minister John Swinney is due to chair a further meeting of the Scottish Government’s Resilience Room (SGoRR) on Thursday evening as the coordination of the response to storms Dudley and Eunice continues.

He said: “With two storms back-to-back, we expect severe weather to continue into the weekend across large parts of the country.

“We would strongly urge everyone to continue to pay close attention to the latest travel advice and to exercise caution on the roads.

“Storm Eunice may bring heavy snow and strong winds to much of Scotland from the early hours of Friday, posing further risks to transport and other essential services.

“The Scottish Government’s resilience committee will continue to monitor the situation. We remain in close contact with local authorities and emergency and essential services to ensure people in the affected areas receive the latest information, advice and support where needed.”

STV Weather presenter Philip Petrie said all eyes are now on Storm Eunice, which will be moving in through the early hours of Friday morning.

He said: “The main focus of the storm’s strong winds will be across England and Wales, where a very rare red weather warning for wind has been issued across areas around the Bristol Channel.

“For us in Scotland, we will get a significant amount of snowfall quite widely across the country thanks to Eunice.

“Early Friday morning the precipitation associated with Storm Eunice will begin to build in from the south, and as that hits the cold air from overnight it will be falling as snow.

“Generally, we could be seeing 5cm building up at low levels away from the coasts, with more significant snow on higher ground. There could be 10-15cm on ground above 250m.

“Combined with this it will be relatively windy, particularly across southern areas.

“So, with the snow and slight increase in winds it is likely to lead to the risk of blizzard conditions and drifting snow.

“The persistent snow and rain will ease Friday night as the storm moves off followed by wintry showers overnight.”